As a child, I liked to read. Yes, I played outside, rode my bike in the street, went to the park or the beach with my friends, and did all the stuff kids usually do, but I also read.

Every evening I would escape into a story. I would sit up and read by torchlight well past my bed-time, until my eyelids wouldn’t stay open any longer.

The library was, to me, a magical haven where I could discover new tales. As soon as I could, I got myself a child’s membership to the nearest one, which at the time was Cliftonville Library. There were thousands of books piled high on racks of shelves squeezed too close together. I read children’s books, grown-up books; anything I could get, whether I understood it all or not. I suppose this had something of an influence upon me in later life.

This was when books had a beige card inside the front cover, and a sheet of stamped dates showing when it needed to be returned. As much as I liked reading books, I also enjoyed looking at how many times it had been read. Books first borrowed decades before I was born were available to me to read, and they carried the histories of everyone who had read them. 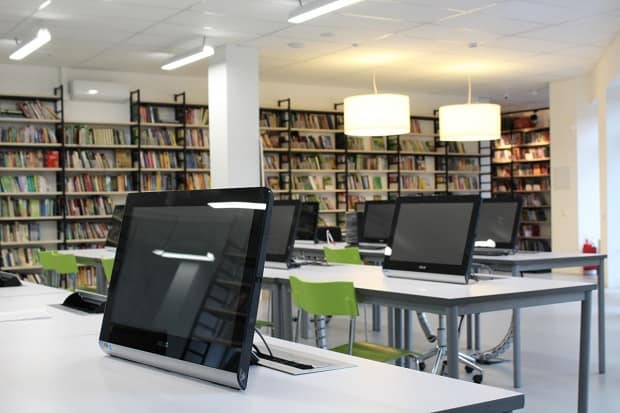 Of course, times change. These days libraries have evolved. You don’t need to go to the library to look something up, you can do it on your phone. If video is responsible for the demise of the radio star, then the internet is surely a serial killer. Shops, letters, books, and countless other industries have been affected, damaged, or destroyed by the advancement of the digital world. Everything is online now.

This is hardly a surprise. The internet, in its various forms, was predicted by many fiction writers including William Gibson, Isaac Asimov, Arthur C. Clarke, and even Mark Twain. Horrifying visions of the future where literature is removed from shelves—either piece by piece or all at once—and the inevitable consequences were created by authors like George Orwell, Ray Bradbury, and H. G. Wells.

Despite this, libraries hold far fewer books than they used to. Instead, floor space is given to computers, allowing those without internet access a space to get online for free. Understandably, many of these people are out of work and rely on libraries for this facility in their quest to gain employment, along with sorting out bills and so forth—all the things we take for granted until the power goes out and we are left without the internet.

It is disappointing, then, that Kent County Council will be cutting the opening hours of libraries. Savings of nearly a million pounds can be made by reducing the times our libraries are open, and as less and less funding comes from central government to county and district councils, it is unavoidable that “non-essential” services like libraries that take the hit.

This may be an unpopular opinion, but I think reducing library opening hours is acceptable within the context. If it is a choice between all libraries losing a few hours, or one library (most likely in a deprived ward) closing, I would rather keep them all open. The problem really is that it shouldn’t be an either/or choice, but unfortunately it is. We cannot have the best of both worlds.

‘When the last library closes it doors’

What worries me is next year, or the year after, or the year after that, when further funding cuts force libraries to cut hours again. And again. Until one day, when the last library closes its doors for the last time at the end of the last hour of its last week, and we are all left wondering what we have done.

If only the people making these decisions had spent more time in libraries, reading about what might happen if they were gone, perhaps they would have more foresight. Perhaps if we—the voting public—paid less attention to social media nonsense and instead read a little fiction, we might get an idea of what is around the corner as well, and maybe even do something about it before it happens.

In the meantime, I have a library book to return before it’s too late.