There is not much that I find more instantly relaxing than looking towards the horizon over the sea. It immediately settles my mind and has become a subconscious obsession: whenever I am within sight of the water—which, in Thanet, is more often than not—I find I have to look towards that horizontal line where the sea meets the sky.

It has such a hold on me that I wrote a poem about it, which proves time and again to be my most popular and well-received piece of poetry.

One of the benefits of living in Thanet is having that opportunity to look out over the sea, whatever the weather. We can walk practically the entire coastline, keeping the water in sight at all times, and there are shelters and benches constantly dotted along the route.

It is a shame, then, that the hundred-year-old Newgate Gap shelter has spent the last decade closed off and slowly disintegrating. It is a dramatic and interesting shelter with extensive history, and is clearly valued by the community as—thanks to the numerous objections raised—the Thanet District Council plan to remove the roof and bastardise the structure into columns of hanging baskets has been withdrawn. 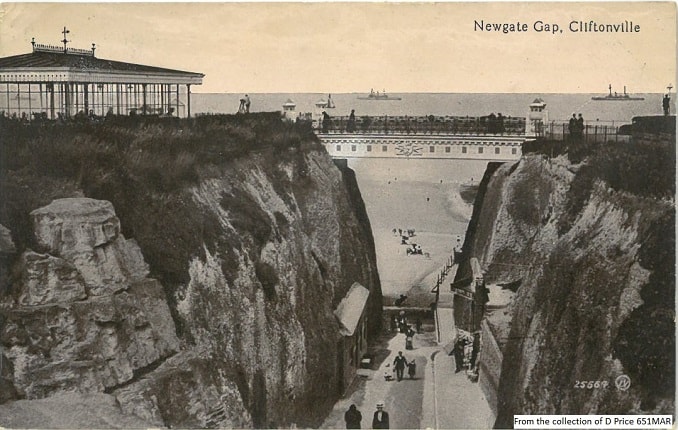 The Newgate Gap shelter is a reminder of a Cliftonville that once was. It shows the history; connecting the dots between the architecture, the infrastructure, and the geography. Not only that, but it stands as testament to its own quality: despite being neglected, falling into disrepair, being fenced off and ignored, it still stands. It still has character. It deserves to remain.

If cash injections can be justified in restoring local architecture—largely to the benefit of private landlords with properties in Cliftonville—then why not restore the Newgate Gap shelter for the benefit of the public?

It truly is an embarrassment that we live in a disposable, temporary culture. My phone is one of the most technically advanced and incredible pieces of technology ever created by humanity, yet it is already obsolete as a new model has superseded it. We build and manufacture things to use short-term, and now treat everything else the same way. Upgrade used to mean change bits to make it better; now—to our shame—it means replace entirely. 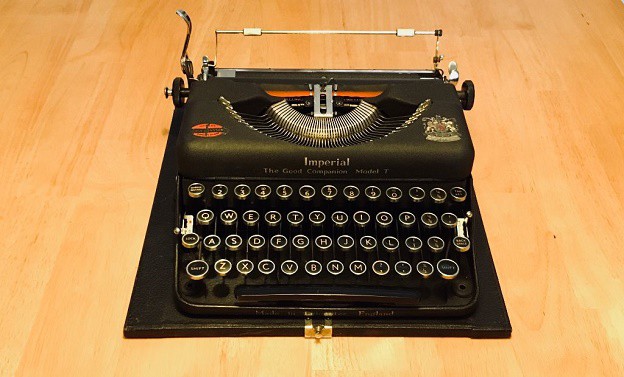 For example, I don’t think my laptop will still be working in 66 years’ time. My typewriter, however, is 66 years old and still going strong.

I have an Imperial ‘The Good Companion’ Model T typewriter from the early 1950s, and it is beautiful. It has round keys that make a clicking hammer sound when pressed, and there’s something very satisfying that comes from using it. I admit that I can type a lot quicker using a laptop—which I tend to use more, what with writing a fair amount—but I prefer the typewriter.

My typewriter is mainly used for poetry, as there is no delete option. Everything I type is permanent so I have to think very carefully about each and every word. As the renowned poet and occasional Ramsgate resident Samuel Taylor Coleridge once said, poetry is “the best words in their best order.” If I make a mistake, or decide a word doesn’t fit, I have to type out the whole poem again, meaning I will pay even more attention to what I am writing. Plus, poetry on a typewriter looks very cool.

For me, this has been a summer of poetry, and that doesn’t show any signs of stopping soon. At the beginning of August I had the opportunity to read and perform poetry at Tongue Punch, a monthly poetry night at the Tom Thumb Theatre in Margate.

It’s a great night, often hosting big names in the poetry world, and definitely worth a visit. The next one has a brilliant line-up including twice winner of the Guyana Prize for Literature, Maggie Harris, and the one after will feature the National Beat Poet Laureate of the USA, Chris Vannoy. If you want to hear—and see—the best poets in the area (and considerably further afield) then reserve a ticket.

As well as appearing on stage at Tongue Punch, I was also interviewed—along with several other local poets—as part of a BBC Radio Kent outside broadcast, and a week later heard myself—in great company—reading poetry and waffling on the radio.

Going back to the subject of typewriters, this month I will be Poet-in-Residence for Margate Festival for a day, and although I won’t be using my own old typewriter, I’ll be typing on one manufactured in the same year.

The Poet-in-Residence scheme is organised in association with Whisky & Beards, Thanet Writers, Margate Bookie, Turner Contemporary, Dreamland, and Kent County Council, and runs throughout the festival, with seventeen poets on seventeen days using the same 1952 Blue Bird Torpedo typewriter. Poets will be all over the place and well worth seeking out; I’ll be at Cliffs on Northdown Road on Saturday, September 15, so drop in and say hello.

Margate Festival is presenting its own packed and intriguing selection of events which I am very much looking forward to exploring. Then, at the end of the festival, the Margate Bookie returns for the second time this year with an excellent programme. Having attended previous years, I had the privilege of speaking at the first Bookie of 2018 as part of the launch of Shoal by Thanet Writers. It is always a wonderful experience and one I would, again, highly recommend, and it brings some truly wonderful writers to the area.

In fact, many famous writers have come to Thanet in the past, including the poet T.S. Eliot who famously sat in a shelter in Margate and penned part of his epic poem The Waste Land. How many other poets have sat in those shelters and created rhymes? With our thriving and creative poetry community, how many more will?

Perhaps, instead of replacing or “upgrading” them, the council should instead restore these neglected pieces of history. After all, the old adage is true: they don’t make them like they used to.