Warning signs have been put in place, enforcement action threatened, meetings held and pleas from residents issued on a daily basis but still the flytipping and overflowing rubbish at Athelstan Road in Cliftonville continues.

Paladin bins in place at each end of the road are supposed to be for community use by residents in the area that do not have access to a residential refuse area.

But the bins are a hotspot for continual dumping of everything from used nappies to household furniture. 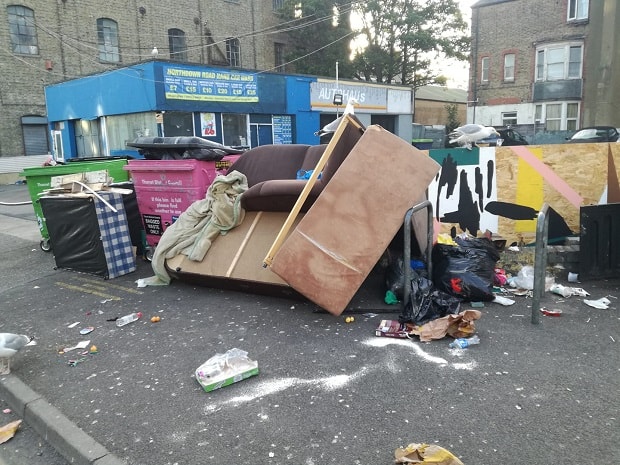 And now, overnight, a huge pile of dumped goods including a settee and a bed base have appeared. TVs has also been tipped by the bins. This pile of rubbish is on top of the daily overflow and mess caused by household rubbish having to be placed on the pavement because the bins are full. The bags are then being ripped apart by seagulls and spread across the street. 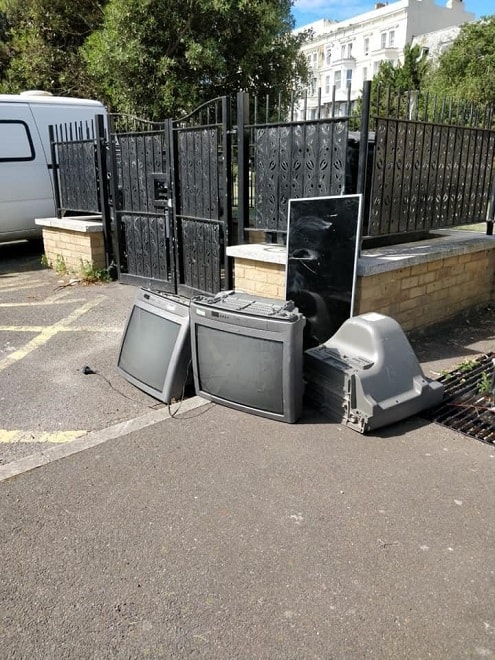 Athelstan Road Tenants and Residents Association chairperson Matt Shoul  says the bins are being filled with  trash not necessarily from people living in the street and need emptying at least twice a day.

He said: “It is a daily occurrence for the bins to be perpetually overflowing, often within 15 minutes of being emptied.

“At the moment, both sets of our end of street bins are overused to such a severe extent that they need to be emptied twice a day, everyday, and even with this level of servicing there is still an outrageous amount of mess from overspill and seagulls, so much so that it can take the TDC waste collection teams approximately 30 minutes, per end of Athelstan Road, just to clear up the mess.

“It is not an efficient system for Thanet council and horrific in terms of scavenger noise pollution and the horrendous volume of detritus that’s blown the full length of the street – daily – which finds its way into people’s gardens, basements and doorways.

“ARTRA’s campaign is that all end of street paladin bins must be removed and replaced with all households reverting to their pre-2013 on-site waste storage – this is important, otherwise ARTRA will have to duplicate this ongoing campaign twice.

“All end of street paladin bins must go, or all paladin bin abuse will be focused at the Ethelbert Crescent end – doubling the disaster already here!”

Ward councillors Alan Currie and Heather Keen have raised the issue with Thanet council and say the Manston depot needs to be fully reopened to try and quash the rising flytip incidents.

But the measures taken so far are just not working says ARTRA founder and resident Luke Mclean.

In a post showing photos of the last two weeks Luke shows the continuing mess blighting the lives of Athelstan Road residents.

He says: “The first picture was taken today, two weeks after we notified the council (Not the first time, just the most recent).

“The second picture was taken one week ago, when we had been crying out to the council for a week for help regarding this major problem.

“The third picture was taken two weeks ago, showing the council has done absolutely zero to resolve the horrendous situation occurring daily at the Northdown road end of Athelstan Road. 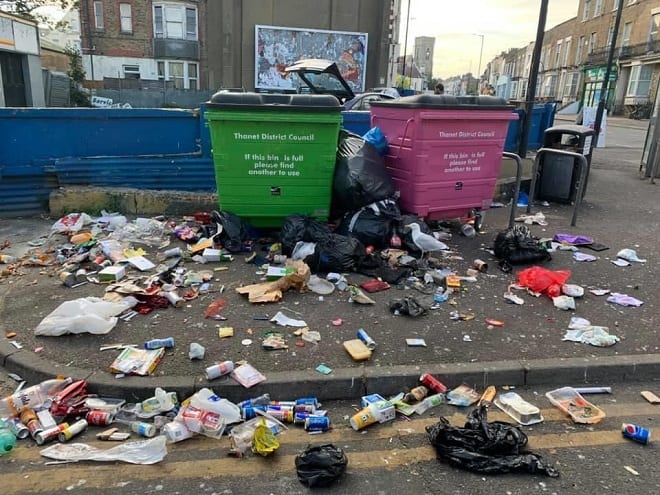 “It’s quite astonishing that this is believed to be acceptable and unworthy of any kind of immediate solution during what is also a period of great risk from an as yet uncontrolled lethal virus.

“The fourth picture is a 14 year old Romanian girl sweeping our streets as the council don’t deem it a necessity despite the major health situation evolving at this site due to huge amounts of seagull droppings left daily amongst used nappies, cat litter and food waste.

“Again these would be rats if we didn’t live so close to the coast. Enough with the token gestures and fix the broken system urgently.”

Mr Mclean says the issue can’t just be blamed on flytipping and that the lack of room in the bins for the volume of household waste is the major problem.

Cllr Currie says Athelstan Road is the subject of greater enforcement action than any other area in the ward but adds that “the situation especially with the seagulls has become a health hazard.”

He says he would like to see the paladin bins removed, adding: “I do believe a decision by officers will be made about them soon as they are now a health hazard and the seagulls obviously regard this area as a feeding zone the same way as certain people treat it as an unofficial rubbish tip. 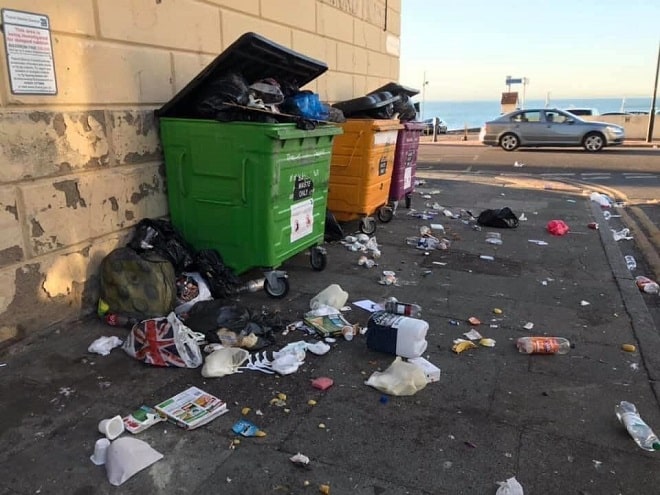 “The verdict was the problem is getting worse not better. Removing the bins is the easy part, the difficulty will be managing loss of capacity, providing rubbish disposal facilities to those who are unable to have their own bins and the inevitable rubbish dumping that will happen where the bins were situated.

“Enforcement and street cleaning will have to attend on a regular basis until the situation improves which may take some time.”

Streetscene enforcement staff have put signs in place warning of hefty fines for fly tipping following complaints that the bins are being filled with  trash not necessarily from people living in the street and need emptying at least twice a day.

Stickers have also been used stating the bins are for bagged domestic waste only after complaints of trade waste being dumped at the site and CCTV is in use.