A residents’ association in Cliftonville has launched a campaign to get rid of paladin bins in the street which are overflowing with rubbish spillage on a daily basis.

The eight bins are sited at each end of Athelstan Road and aim to serve properties in multiple occupation.

But Athelstan Road Tenants and Residents Association chairperson Matt Shoul  says the bins are being filled with  trash not necessarily from people living in the street and need emptying at least twice a day.

He said: “It is a daily occurrence for the bins to be perpetually overflowing, often within 15 minutes of being emptied.

“ARTRA want Athelstan Road’s environment to be as civilised as all other Cliftonville West streets – it was once and this must surely be a practical possibility once more – it just needs the right strategy.

“At the moment, both sets of our end of street bins are overused to such a severe extent that they need to be emptied twice a day, everyday, and even with this level of servicing there is still an outrageous amount of mess from overspill and seagulls, so much so that it can take the TDC waste collection teams approximately 30 minutes, per end of Athelstan Road, just to clear up the mess.

“It is not an efficient system for Thanet council and horrific in terms of scavenger noise pollution and the horrendous volume of detritus that’s blown the full length of the street – daily – which finds its way into people’s gardens, basements and doorways.” 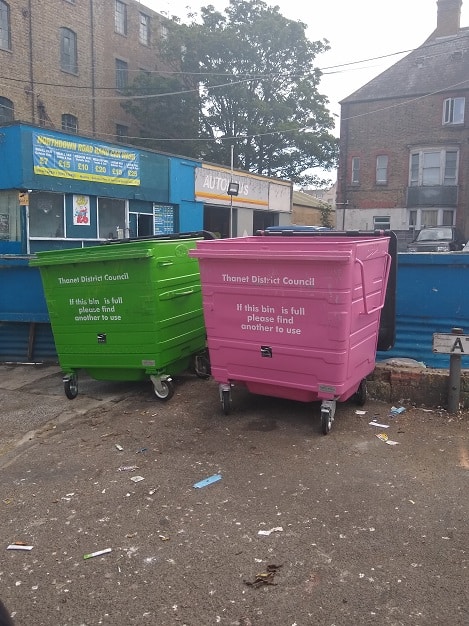 The rubbish spillage this morning (June 16) has been cleared by Thanet council staff and signs will be going up to warn about proper usage. Two new bins were installed just yesterday.  A council officer has told ARTRA prosecutions will be carried out if necessary. 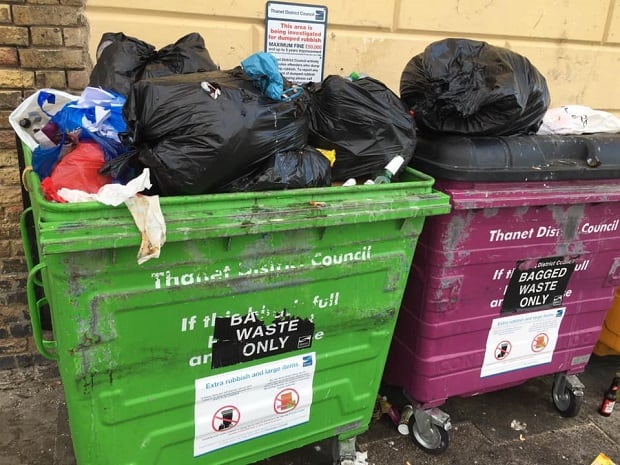 “Tomorrow morning around dawn the seagulls will come for breakfast and the food waste, used nappies, cat litter and god knows what else mixed with hundreds of fresh seagull droppings will be all over the pavements and entrance to the road until 8am-ish when they come to empty the bins again.

“This means anyone that lives on Athelstan Road and needs to use the zebra crossing or the bus stop to get to work or take their kids to school is forced to walk through all the mentioned filth and waste.

“On a windy day, all the waste blows down the entire street and into our basement flat gardens or on to the pavement. This is then left as the street sweepers have been given a policy of just “topping and tailing” Athelstan Road. This happens every day, day in day out. Even Sundays.

“Bearing in mind that we are dealing with an infectious disease at the moment this is in no way a healthy way for people to have to live.

“I commend the cleaners, I would hate to have to clear up the mess at the top of Athelstan Road daily. It must be demoralising. They are fighting a losing battle.

“Clearly the waste collection system hasn’t worked for years at the top of Athelstan Road and it must feel like turning up to an earthquake rescue mission with a dustpan and brush.”

ARTRA says it is looking at alternative solutions to the paladin bins which Thanet council could consider and hopes to be able to agree a trial of a new system.

Mr Shoul said: “ARTRA will undertake a Freedom of Information request on precisely when TDC first introduced paladin bins on Athelstan Road and why the previous at home/on-site storage set-up, extant on all other Cliftonville West streets, apart from Ethelbert, the two most impoverished streets in the area, was abandoned.

“Various solutions to create a better waste management system are being explored, including using the street’s rear gardens, which all back onto the unmaintained alleyways, which were the Victorian solution to storing and collecting the street’s rubbish and which are wide enough for a vehicle as wide as a Ford Transit van, with room to spare.”

Ward councillor Alan Currie says he has been informed that this morning’s waste was household rubbish but 10 fines were issued for flytipping last week and the signage will be put up shortly warning of hefty fines for  misuse of the bins which will be caught on CCTV.