As we come to the end of 2017 The Isle of Thanet News takes a look back at some of the more unusual stories from the year.

From literal bear hunts to bare behinds, a duck with a personality complex and a near miss for Margate’s Gormley statue – the year has been anything but boring!

In May we were the first news outlet to reveal the ground floor of the Primark store at Westwood Cross was closed because of subsidence fears.

The subsidence was being caused by a sinkhole in the car park by the building that was the result of former Army practice tunnels at the site which were sealed in 2014.

Thanet Hidden History kindly allowed us to use their photos taken in 2015 of the underground tunnels at Westwood Cross.

It is believed the tunnels were used during both World Wars for training exercises.

A Freedom of Information request sent to the Ministry of Defence in 2015 by Ravenside Investments Ltd ( a subsidiary of Land Securities) tried to establish records of the tunnels but the MoD said it held no information.

A network of wartime tunnels and air raid shelters run underneath Thanet, the best known perhaps being the Ramsgate Tunnels where families sheltered from the enemy raids on the town.

Other tunnels run under Manston, on both the East Cliff and Westcliff and in Cliftonville by the Eastern Esplanade to name just a few. There is also a shelter under the former Hovis Mill, off Margate Road. 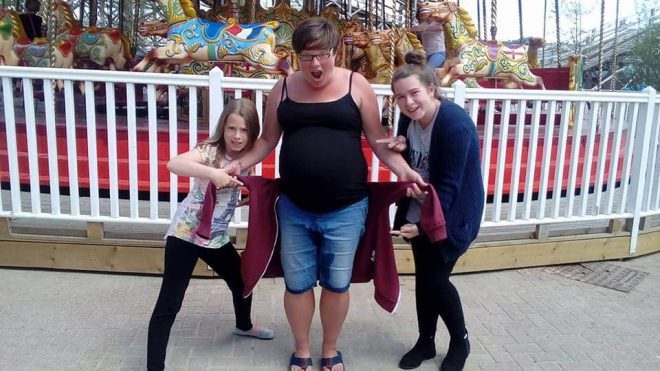 When Stacey Umbers visited Dreamland on June 24 little did she know the only ride she’d be getting was to the hospital.

The expectant mum, wife Candice and sisters Olivia, 14, and Zoe, 10, had only made it as far as wristband office when Stacey’s waters broke.

The 29-year-old, from Margate, was in the queue when the baby decided the time might be right to make an arrival.

Candice, 45, said: “Stacey turned round and I said ‘I think your waters have broken.’ The lady in the queue behind us was a midwife and she put Stacey at ease and then off we went to QEQM.

“Stacey and baby were declared fit and well and came home. The next day she had a consultant appointment anyway and they decided that because her waters had broken she should go to the labour suite.”

This service is rubbish!

Also in June a furious mum-of-four from Ramsgate dumped her bags of rubbish at Thanet council premises, saying there has been a repeated failure to make weekly waste pick ups from her home.

Shop supervisor Sue Bell, from Margate Road, said she had to contact the authority every week for the last nine weeks because waste has not been collected.

Finally Sue decided enough was enough and took four bags of uncollected waste  to the council Gateway premises, saying it was time “to cut out the middle man” and left them for staff to dispose of.

July 6 was a double birthday celebration for Westgate lass Chelsea Monks and, erm, her balloon!

The social media worker turned 25 and amazingly so did the balloon given to her mum by her Aunt Laura on the day she was born.

Chelsea tweeted out a photo of her and the balloon taken last week before she jetted off to Lanzarote for a birthday holiday.

Former Dance Court pupil Chelsea said: “It is the balloon my aunt brought my mum in hospital when I was born and they found out that I was a girl.

“ Mum kept it as a keepsake thinking it would deflate but it never did!

“ I took the photo so that I could show it to my family on my birthday like ‘hey guys look at how me and my birth balloon have grown!’ Then I tweeted it too because I thought it was funny how the balloon has aged better than I have – it has way less wrinkles than me!”

In August a plea was made for the safe return of Howard the duck after he was apparently stolen from a henhouse in Margate.

Howard – who thinks he is a bunny rather than a duck – was in the Invicta Road henhouse with rabbit Sootika but when owner Hannah French got up in the morning she discovered the family’s pet duck was gone.

She said: “He has his closest friend the rabbit and they have never been apart, until now! They eat, sleep and play together and the rabbit is rather lost. The hen house was opened up last night, as well as the surrounding pen, and the rabbit was running around but no duck!

“Howard doesn’t like ponds and he thinks he is a rabbit so whoever has taken him better have good counselling skills.”

Sadly, it doesn’t seem that Howard was returned.

Also in August three hens were found on Broadstairs beach.  RSPCA Thanet branch posted a notice about the unusual find, saying: “Three hens found on the beach just below the Botany Bay Hotel near Broadstairs.
!They weren’t checked in as guests at the hotel, didn’t have beach towels, refreshments or sunblock, and so we assumed they were lost rather than having a nice day out at the beach.”

But Ramsgate laid down the gauntlet to be a top art town with its own interpretation of those famous pieces.

In September organisers of the Addington Street Fair posed for a cheeky imitation of the Gormley statue with five of the ladies plunging naked into the sea at the Western Undercliff.

One of the crew, Becky Wing, said: “Margate has Antony Gormley at the Turner. Now we have Gormless Antonia’s at The West Cliff.”

Sticking with the Gormley statue, the grounding of the Islay Trader just metres from the artwork caused quite a stir.

The 75-metre cargo ship  ran aground at Margate on Fulsam Rock in October.

The Islay Trader was transporting a load of broken glass from Purfleet to Antwerp when she dragged anchor and ran aground.

Margate RNLI’s two lifeboats and tug were on standby and another tug from Medway was called in to get the vessel back on its way.

At high water  the ship, which had six crew onboard, was towed clear of the shoreline by the tug and went to anchor in Margate Roads awaiting further orders. None of the ship’s crew were harmed in the incident. 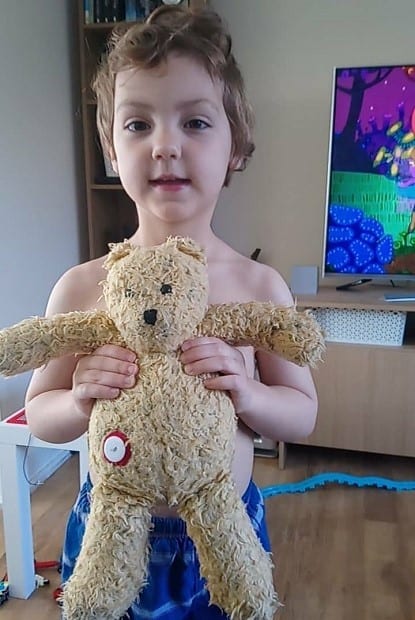 In November there was an actual bear hunt at QEQM Hospital. Staff combed the wards in the early hours of the morning after Newlands pupil Emily Harris lost the bear during a visit to the site.

The youngster suffers from Hirchsprungs disease which affects the large intestine (colon) and prevents bowel movements.

She underwent emergency surgery in January to fit an ACE Stoma, which enables waste to be flushed from the system. Following the procedure the Breakaway Foundation, which supports children with bladder and/or bowel dysfunctions, referred Emily to A Bear Named Buttony charity.

The project sends children Buttony, a special bear with a stoma on its abdomen, just like the toy’s young owners.

When mum Louise realised where the bear must have been left she issued a facebook plea to find it. Despite it being past 11pm staff paw-sed what they were doing to uncover the special teddy  in the North Foreland  reception.

Emily was delighted to have the bear back, putting him in his PJs and straight to bed after telling her mum: “He must be very tired after his adventure!”

Read here: 12 reasons why Ramsgate is so much more than Thanet’s ‘grubby child’