In the Ukraine area of Zhytomyr two hospitals and an electricity plant are among the sites that have been bombed by Russian airstrikes.

Air raid sirens scream frequently, shelling can be heard and fires seen further to the east.

Matt, who also served in the British Army from 2012-2014, headed out to the war torn country to help with medical aid.

The 29-year-old, with support from his partner Rochelle Oliver and family, has used savings to travel to Ukraine and buy vital kit and medical supplies.

The self-employed court service worker said: “We were on holiday in the Lake District when we watched the news about Ukraine and I said to my partner that I had to go and help. By that evening she said she knew I would be going and so we started to make plans.

“I booked a flight to Poland and met some lads on the plane who were also coming out here and we then made our way to Lviv (80km inside Ukraine from the Polish border).

“When we crossed the border we were asked to sign a contract saying we would stay until the end of the war but we didn’t want to do that.

“In Lviv I got to know a bit about the Ukraine people and we did some reconnaissance work so we knew what we were going into.”

Yesterday (March 11) Matt and his companions moved to Zhytomyr which is one of the areas being targeted by airstrikes.

Matt said: “A hospital has been shelled, it’s pretty bad. The hospital was just dust, the whole building was blown up, it was horrific. Last night I could see and hear shelling further east, the whole sky was lit up and I could see the fires. The air raid sirens are going off all the time.

“It’s a scary situation and scary for my partner, I was on the phone to her and she can hear it all but she is fully supportive of me being here and has given me the courage to come and do what I can.”

Most of the victims were in Kiev, Kharkov, Donetsk, Sumy, Kherson and Zhytomyr regions. pic.twitter.com/efVUwGvEQc

Matt says he had planned to join a unit but was asked to go into Kyiv which is currently under heavy siege.

He said: “I’m happy help in Zhytomyr which is being shelled and will go further east but I am not here for the politics and we have to bear in mind that it is not our war. I’m here purely to help the Ukrainian people, the kids and families who want to get out or need medical attention.

“We will go further east as that is where we are needed.  The closer you get to Kyiv the more people you see with weapons, some do not even look old enough to have left school. We bought a load of lollies and handed them out to the kids, they were so grateful. It’s not much but it is just trying to bring some light into a very serious situation.”

Matt has spent his savings on equipment such as tourniquets, bandages, splints and other practical medical supplies.He has also taken kit such as a blood pressure machine with him.

He has some savings left and has access to banks so he can withdraw cash but has now also set up a fundraising page so he can buy water and supplies and directly help people who are fleeing.

He said: “I wasn’t going to set up a gofundme as it was my decision to come out here and so I wanted to soak up the cost myself but I have now set it up and can withdraw money to literally give to people who are fleeing so that when they reach the next safe town they have money for food and water.

“When we crossed the border I thought there would be more help here for them, British Red Cross points etc, but I saw only a few food stations.

“It is quite desperate. In Kyiv people haven’t got supplies and the aid is not getting in.”

Matt is due to return to the UK on April 1 but says, if he is able to raise funds or get sponsorship, he will stay home for a week or two to regroup and then return to Ukraine.

He said: “This situation is not going to end quickly. The Ukrainian people talk of when they will win the war, not if but when. They really are warriors, fully prepared to give their lives for their country.

“I was told some 60,000 people have returned to Ukraine to fight. People are putting their lives on hold, they are losing their homes for a war they never even wanted. I just want to help as much as possible, the medical side of things is really needed here.” 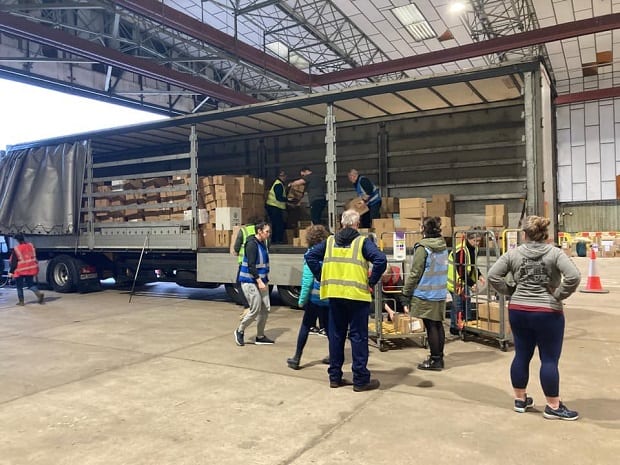 Medical supplies, toothbrushes and toothpaste are some of the items still in demand at a collection point in Manston being organised by Type One Style.

The first load for shipment left Hangar 3 in the week but volunteers are still sorting and packing donations for the next load.

Under the banner of United For Ukraine the team and volunteers  have been sorting, collating, packing and loading.

They are working directly with the Ukrainian government and a network of volunteers inside Ukraine that they have built using digital platforms.

They are shipping to Ukraine and border regions.

To help the effort fill in the volunteer form here

Aid collections continue into next week at Quex Barn in Birchington.

The effort is being co-ordinated by Susan Johnson, Edyta Jobczynska and Anna Sabatowska alongside Ian and his team. They are working with the Polish Association and being helped by the Friends of Quex Park and numerous volunteers including Rotary members.

Westgate United Services Club is raising funds for the Ukraine appeal with a raffle and quiz followed by a disco on April 2 from 7.30pm.

Scores of businesses in the town have donated prizes.

Teams can be up to 6 people, £4pp, non-members welcome.