The images and experiences of people fleeing the Russian assault on Ukraine are being documented by Margate-based photojournalist Krisztian Elek.

Krisz is currently in Lviv on the Ukraine-Poland border. In the next few days he will be heading into Kyiv as part of his bid to show the world what is happening on the ground in Ukraine.

He is being helped by wife Bea, who is in Margate but also writes for a Hungarian newspaper and is sharing her husband’s images and stories.

Before the invasion into Ukraine on February 24 Krisz was a part-time care worker on top of his freelance photography assignments. Similarly, Bea had been working as a cleaner as well as being a journalist for outlets such as https://www.szeretlekmagyarorszag.hu/

The pair have both volunteered in numerous countries experiencing crisis. 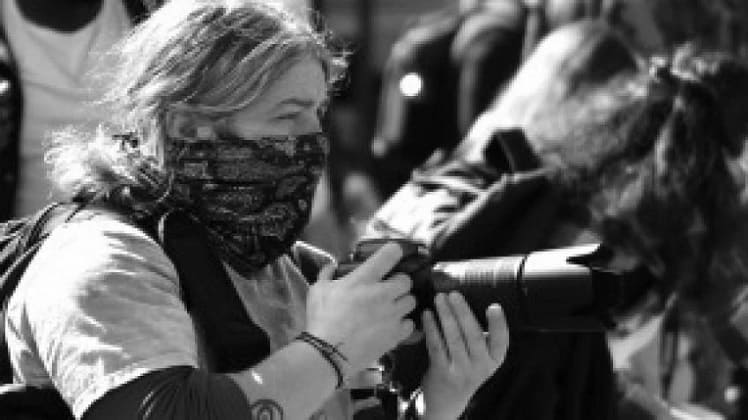 Talking to Krisz yesterday (March 8) as he managed to get an internet connection, we were interrupted by a Territorial Defence Force member questioning what he was doing.

Krisz said: “There are lots of soldiers, police, national guard volunteers here. You have to be careful as their finger is always on the trigger. People are paranoid and anxious so they will ask where I am from and what I am doing here.”

Krisz, who is accredited to be on the frontline, says Lviv is packed full as people flee from the east to get across the border. The city is just 80km from Poland and the people coming through are heading there or for countries such as Slovakia, Romania and Krisz’s native country of Hungary.

His photos show hundreds of people waiting at the train station, more and more each day, he says.

He added: “The other night I was out all night long at the station. It was minus 3 degrees, extremely cold.

“I had been thinking for quite a while to show the reality of this ‘forgotten war’ because it has been going on since 2014 (when Russia annexed Crimea).

“The meaning of the ‘forgotten war’ is that not many people really reported or wrote any articles about it in the last eight years. Then last December the tension began to grow between Russia and Ukraine and I knew I had to go because from now on it will be different in Ukraine. I wanted to make a photo essay from the Internally Displaced People (IDP) and from the frontline.

“The day when I intended to travel to Kyiv my flight was cancelled. Literally, I was standing by the check-in desk and all flights to Ukraine were cancelled.

“I went to Budapest and then the border and walked to Beregovo (western Ukraine).”

Krisz spoke with people there and then moved on, firstly back in Hungary and then to Uzhgorod and then on to Lviv.

He said: “I am documenting the refugees fleeing from the east, Bea is with the Hungarian online paper and tells my journey, firsthand from the people of Kharviv, Kyiv and the other big cities.”

At the station in Lviv soup is cooked in cauldrons, people waiting for the train are warming up by fires lit in huge barrels. Volunteers offer everyone food, boiled eggs and homemade cakes as well as soup and tea.

Krisz says: “People stand in long lines from the checkout to the platform. Not only those who want to travel, the number of trains is also rising, yet it is difficult to get on flights to the west. They try to put mothers and children ahead.

“Many say goodbye. Men bring their families out, put them on the train, and then head to the front. They know they may never see each other again.

“I met a boy with a Czech flag. He said he volunteered to go fight for the Ukrainians. I saw in the news that Croatian volunteers were also coming. They say they want to pay back that the Ukrainians supported their struggle for independence in the 1990s.

“I saw an aunt cry. She said they came from Kharkiv with her sister, after her husband ordered them to leave, it was too dangerous to stay there. He still stayed.

“Roma from the deep poverty of the interior also appeared. They have no money, so they are not allowed on the train, many are begging, not with much success.

“Many children often hear crying, but most of them do not yet understand what their parents are so afraid of. They try to beat time with games.

“It’s very cold at the station, it has been minus 3 degrees. There are fires in several places, so the smoke is high, but at least the barrels can get people a little warmer.”

Krisz photographs the crowd, a girl asleep on luggage, a young boy holding his cat, people gathering around the fire. He tells of a young man who gets his poorly parents across the border but who is not allowed to leave himself  as Ukrainians between the ages of 18 and 60 have to stay for military service.

There are foster parents fleeing with 11 children in their care and there is a young girl called Tamara who lives in Zaporizhia, near the recently shelled nuclear power plant.

She says to Krisz: ““The first day I woke up at 6.20am when Mum almost broke my door, screaming that our cities were being bombed. I packed my bag very quickly: money, two T-shirts, a laptop and a charger, and then I jumped in the car to go refuel. It was too late. The panic was so great that in a few hours there were crowds at all the gas stations and in every supermarket.”

She gave up and went home.

She says: “We spent every night in the shelter for a week while the sirens roared down the street.

“My biggest heartache is that my friends in the small villages have nothing to eat because the Russians have taken these places and are stealing and killing.

“People are very patriotic here. Everyone is trying to do something for their country. Men do what they can as soldiers and women as volunteers. I could lose my life at any moment.

“If we lost the war, I would go to Israel. It’s hard because I love my mum, who doesn’t want to move. But I couldn’t stay for a minute if they came to power. I’d rather die on the road.”

Krisz, who had Bea’s blessing to use the couple’s savings to go to Ukraine, says he is scheduled to return on March 20 but will likely say longer. He has set up a fundraising page to try and gather enough money to keep going.

But next is the journey to Kyiv with an Australian photographer and two people from the UK who are bringing him a bullet proof vest.

Krisz said: “We will go to Kyiv for maybe three or four days. We are hoping that we will be able to get out as the Russians are advancing, Kyiv is under siege and surrounded.”

Bea, who is also Hungarian, said: “Krisz is brave, but he wants to be able to come back to me. He tries to do what he can but not to run in front of the tanks, it is most important to show the process of this war.

“I am very proud of him, his pictures can talk about the situation and he can share the information in words as well, so I can write on-the-spot reporting. He gives me videos as well. He is not a reporter, he is not a video maker, so all these tasks are  just extras what he can do with me.

“I was afraid of this war because it is not just two countries, even if here is calm and sunny, everything that is happening there, we will feel it soon –  with the refugees, with the prices, with missing products. Everything is changing.

“We just feel we cannot stop, what we see, this will be an important history. Of course, I am afraid. I would like him to get back home in one piece.”

More than two million people have now fled Ukraine since the Russian invasion began on February 24, according to the United Nations. More than half those people have gone to Poland. The UK has granted visas to 760 Ukrainian refugees so far and 17,700 applications to re-join relatives have been started. Nearly 600 refugees are stuck in Calais and have been told to go to Paris or Brussels for visas.

Heavy attack is being experienced in the city of Mariupol and attempts to ensure the safety of humanitarian corridors for people to flee under siege areas have repeatedly broken down. It is reported a maternity hospital in the city has been hit by airstrike.