Organisers of celebrations marking Ramsgate’s 200-year status as a Royal Harbour are appealing for £50,000 to complete a landmark statue of King George IV – who bestowed the regal honour.

They hope the bicentennial weekend events on September 24-26 will boost the fundraising needed for the 15ft-high statue’s bronze casting, site groundworks, and plinth.

It will also be a poignant memorial to its creator and Ramsgate resident Dominic Grant, a member of 1970s music group Guys ‘n’ Dolls, which had two UK Top 10 hits with ‘There’s A Whole Lot of Loving’ and ‘You Don’t Have to Say You Love Me’.

Dominic went on to become an internationally recognised and award-winning sculptor, committing two years to the King George statue as his ‘Legacy to Ramsgate’, his adopted home town, and marking its unique Royal Harbour status.

Tragically, he died unexpectedly in November 2020, but his wife and Guys ‘n’ Dolls bandmate Julie Forsyth – daughter of legendary entertainer Bruce Forsyth – and their family completed the lower back of the sculpture.

She is now leading an appeal for £50,000 to have the statue positioned on the Ramsgate harbourside, where it is expected to be a landmark, focal point, and meeting place for residents and visitors alike.

Julie said: “Dominic loved Ramsgate. We came here 12 years ago and fell for the town and the harbour – we bought a home immediately.

“We were told about the Royal status and were amazed there was no statue to King George so Dominic decided to do something about it, he gave his time and Sculpting talent to the creation of King George.

‘We would be so proud to see King George ‘returned’ once more to Ramsgate, marking that Royal status and as a legacy to Dominic’s amazing work and his passion for the place he came to regard as home.” 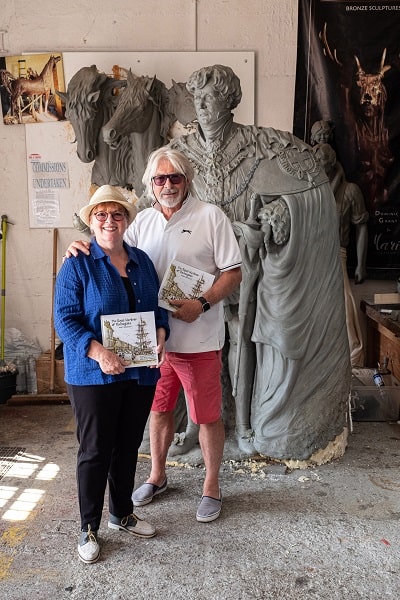 She says she lives and breathes the area where she grew up and believes the statue would be the perfect tribute to King George IV and Ramsgate’s royal connections: “My head and heart are in Ramsgate, and I love it here. We’ve got a beautiful harbour, and we’re about to celebrate its 200th anniversary.”

“Upon receiving my OBE from Her Majesty The Queen, I took the opportunity to explain the forthcoming Royal Harbour 200th Anniversary Festival.

“Subsequently, we have spoken with the Lord Lieutenant of Kent’s office to see if a senior member of the Royal Family would attend the anniversary celebrations – we hope to confirm that shortly.

“But once the statue by Dominic Grant is erected after the celebrations and the final fundraising is completed, we rather hope young Prince George can unveil King George’s statue as one of his first official engagements – what could be better?

“The Royal Harbour 200th Anniversary Festival will be marvellous, and we hope it can assist fund-raising to put the statue in place permanently.

One of the main sponsors for the festival is Blueberry Homes, which is currently completing the £50 million beachfront development Royal Sands Ramsgate. A spokesperson from Blueberry Homes said: “The completion of the King George IV statue would not only be a tribute to the former king and its late creator Dominic Grant but add to the significant regeneration in this historic maritime town, showing that Ramsgate is well and truly heading back to its heyday.”