A Ramsgate attack survivor who uses a wheelchair to get around the town has launched a petition asking Kent County Council to make Ramsgate more accessible for people with disabilities.

Joe Shaw, 27, says a lack of dropped kerbs in the town hampers the ability of people using wheelchairs or mobility scooters to be able to get around freely.

Joe  suffered serious head injuries in an unprovoked attack in Ramsgate town centre in March 2018. The ferocity of the assault meant Joe had to be transferred to Kings College Hospital in London, heavily sedated and in the critical care unit in a coma, breathing through a ventilator.

But determination and hard work mean Joe returned to the Ramsgate home of parents Nancy and Trevor in August 2019 and has learnt to speak once more, ditching the letter board he once used for communication.

Progress is also being made on walking with Joe able to use a Zimmer frame and sticks. But for getting out and about Joe uses the wheelchair or a mobility scooter and says the lack of access is unfair.

Speaking to The Isle of Thanet News when he first raised the issue last month, Joe said: “I’d like to see dropped kerbs put in throughout Ramsgate. How on earth does the council expected someone who is disabled to get up the kerbs or for carers to push and bump them up the kerb? It isn’t fair.

“When I am in my mobility scooter or wheelchair it is really hard when there aren’t dropped kerbs and the town is dreadful.

“There have been many occasions when my carers have had to push me in the middle of the road, especially by the old pub (former Swiss Cottage) where there is scaffolding but no crossing and the pavement is completely blocked off. It makes me so angry.” 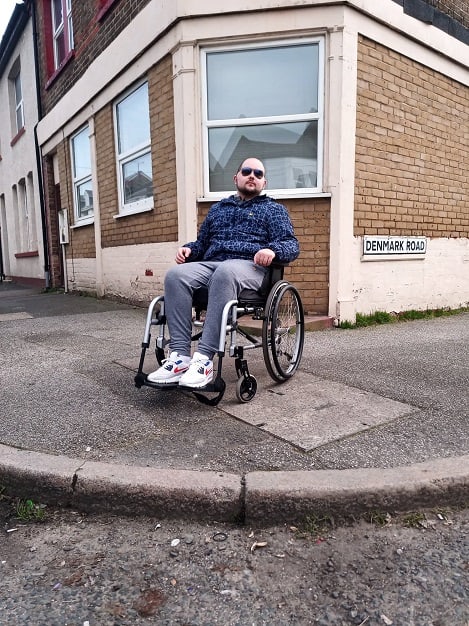 Despite the access problems Joe is amazingly upbeat and says even the lockdowns have provided positive experiences as he continues his road to recovery.

He said: “I learnt to speak again just before the first lockdown began. I’m still trying to learn how to walk again, I can walk with the Zimmer Frame and sticks and then it’ll be crutches and hopefully then independently. I will do it.

“I was on my deathbed three years ago and the doctors told my mum I would never speak again but I am and never walk again but I will.”

Joe’s petition has been backed by almost 300 people so far.