A Ramsgate attack survivor who is rebuilding his life after suffering horrific injuries in 2018 is appealing to Kent County Council to make Ramsgate more accessible for wheelchair users.

Joe Shaw, 27, says a lack of dropped kerbs in the town hampers the ability of people using wheelchairs or mobility scooters to be able to get around freely.

Joe  suffered serious head injuries in an unprovoked attack in Ramsgate town centre in March 2018. The ferocity of the assault meant Joe had to be transferred to Kings College Hospital in London, heavily sedated and in the critical care unit in a coma, breathing through a ventilator.

Joe had been staying at a rehabilitation centre in Herne Bay but his determination, and sustained community fundraising to help with specialist equipment, finally saw Joe return to the Ramsgate home of parents Nancy and Trevor in August 2019.

Continued hard graft has resulted in Joe learning to speak once more and ditching the letter board he once used for communication.

Progress is also being made on walking with Joe able to use a Zimmer frame and sticks. But for getting out and about Joe uses the wheelchair or the scooter and says the lack of access is unfair.

He said: “I’d like to see dropped kerbs put in throughout Ramsgate. How on earth does the council expected someone who is disabled to get up the kerbs or for carers to push and bump them up the kerb? It isn’t fair.

“When I am in my mobility scooter or wheelchair it is really hard when there aren’t dropped kerbs and the town is dreadful.

“There have been many occasions when my carers have had to push me in the middle of the road, especially by the old pub (former Swiss Cottage) where there is scaffolding but no crossing and the pavement is completely blocked off. It makes me so angry.”

Joe says the lack of dropped kerbs means he has to pre-plan the route of every outing just so he can be sure he doesn’t get stuck anywhere.

He says there should be investment to change this, adding: “I read recently that Ramsgate has been allocated £2.7 million from the government. I strongly feel that some of this money should be spent on improving the path’s for wheelchair and pushchair users.” 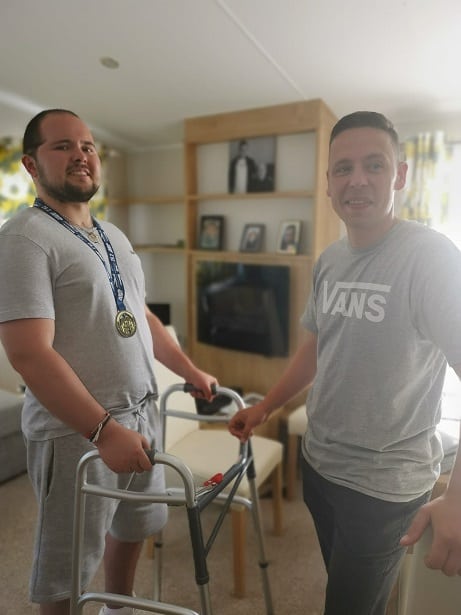 Despite the access problems Joe is amazingly upbeat and says even the lockdowns have provided positive experiences as he continues his road to recovery.

He said: “I learnt to speak again just before the first lockdown began. I’m still trying to learn how to walk again, I can walk with the Zimmer Frame and sticks and then it’ll be crutches and hopefully then independently. I will do it.

“I was on my deathbed three years ago and the doctors told my mum I would never speak again but I am and never walk again but I will.”

She said: “Dropped kerbs are essential for wheelchair and scooter users. They enable access for all to shopping and leisure facilities  and should be carefully planned with input from local disabled people.

“Scaffolding arrangements should not go ahead without consideration of safe routes for people with disabilities. In my view, the provision of adequate dropped kerbs and smooth surfaces for mobility should be considered by the council under equalities legislation.

“It is a terrible story in 2021 that someone with additional needs is forced to take risks getting round his locality. Again, I would expect a constructive response to be given by Kent County Council to introduce more dropped kerbs.

“This matter links to our campaigns in the past to remind local businesses to think of access for people with disabilities.”

A Kent County Council spokesman said: “We’re sorry to hear that Mr Shaw is finding it difficult travelling around Ramsgate.

“Regular inspections are carried out of all footways in Kent to ensure the safety of all road users, this includes specifically considering wheelchair and mobility scooter users.

“When we resurface pavements, we also look at whether we should install additional dropped kerbs.

“We will always consider specific requests for dropped kerbs and these can be made at Kent.gov.uk”