Medics from British Divers Marine Life Rescue, the RSPCA, Wildwood and Margate Coastguard were all called to Ramsgate sands (King George VI Park end) after a stranded beaver was found on the beach today (March 25).

The natural habitat for beavers is fresh water surrounded by woodland.

The beaver was taken away in a crate by staff from Wildwood Trust to be checked over.

A Margate Coastguard spokesperson said: “HM Coastguard Margate were tasked by UK Coastguard to reports from a member of the public of a beaver on the beach between Dumpton Gap and East Cliff in Ramsgate.

“On arrival it was extremely rare to see but there was indeed a beaver on the beach. The RSPCA were also tasked along with The Wildwood Trust from Canterbury to asses it.

“The animal was taken away for assessment and any treatment that is needed.

“It is extremely rare to see a wild animal like this on our beaches but we urge that if you do come across something like this, please do not approach and Dial 999 and ask for the Coastguard. We will be able to arrive on scene and after assessment get the appropriate services that best suit the situation.”

A spokesperson for the Wildwood Trust said: “This is a time of year when young animals can get displaced out of family groups. It is likely he made his way downstream and ended up on the beach. Beavers do not do well in salt water, however he did not appear to have been all the way in the water, so that’s good.

“Wildwood has rescued beavers on the beach in the past. It varies whether they move on to other wildlife organisations or stay with us.  As the beaver has gone to the vet, for now we’ll have to wait and see what happens.”

The Eurasian beaver is native to Britain and used to be widespread but they became extinct in the 16th century, mainly because of hunting for their fur, meat and ‘castoreum’, a secretion used in perfumes, food and medicine.

The Wildlife Trusts have pioneered the reintroduction of beavers to Britain ever since Kent Wildlife Trust released the industrious creatures into a fenced area of Ham Fen in 2001. 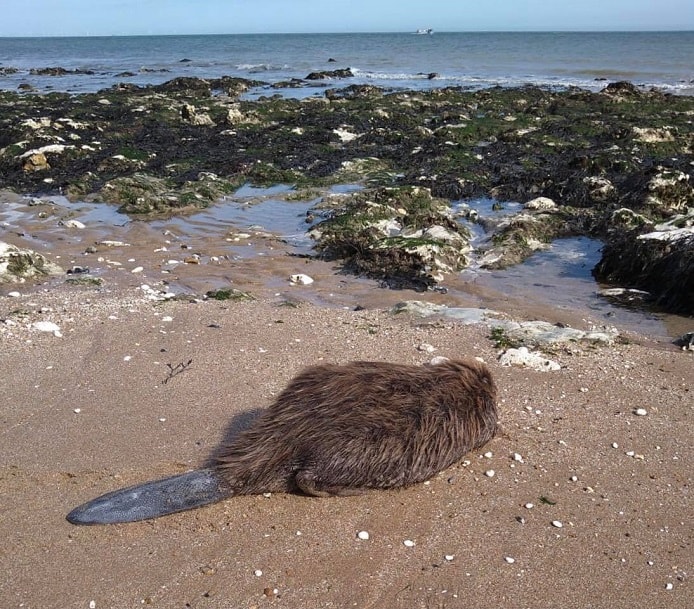 Beavers are often referred to as ‘ecosystem engineers’. They make changes to their habitats, such as digging canal systems, damming water courses, and coppicing tree and shrub species, which create diverse wetlands. In turn these wetlands can bring enormous benefits to other species, such as otters, water shrews, water voles, birds, invertebrates (especially dragonflies) and breeding fish.

Beavers and the landscapes they generate benefit both people and wildlife because:

They help to reduce downstream flooding – the channels, dams and wetland habitats that beavers create hold back water and release it more slowly after heavy rain

They reduce siltation, which pollutes water