Plans to remove a fountain base from King George VI Park in Ramsgate and tarmac over the area where it has been standing for some 15 years have caused upset and confusion.

It is understood the base was removed from Ellington Park and ‘discarded’ at King George VI until it was unearthed by Italianate Glasshouse custodians Phil and Janice Dadds.

The pair say they made enquiries to Thanet council at the time but ‘no-one wanted it’ so Phil repaired it and gained agreement for it to be installed on the path leading to the glasshouse.

For the past 15 years it has been maintained by Phil and regularly topped up with water for the birds and in the trough at the bottom for thirsty dogs being walked in the park.

But now it is to be returned to Ellington Park as part of the site’s renovation plans and, Janice says, despite a pledge by Thanet council to replace it previously being made, the couple are now being told the spot will be tarmacked. 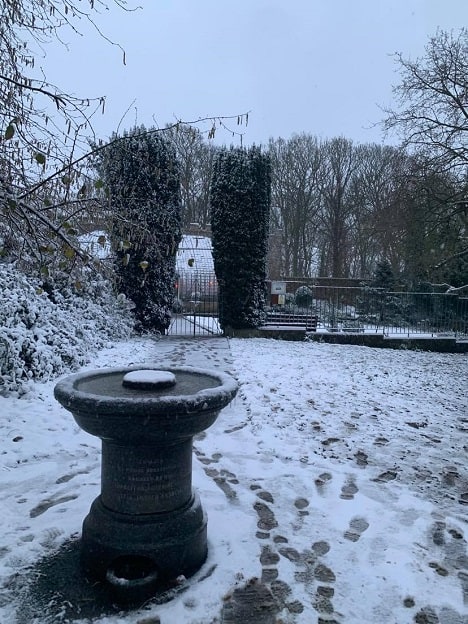 Janice said: “We are pretty annoyed. The fountain base was removed by Thanet council and discarded in King George VI Park. It was found in undergrowth by Phil and he has maintained and looked after it for the last 15 years.

“He fills it up for birds and dogs use the troughs underneath. When the proposal to do the work at Ellington Park was put forward we were told that an amount of money was put aside in to the budget for another fountain or water bath to be put in King George VI Park. Now we are told it’s only going to be tarmacked.

“If it does belongs in Ellington Park that’s where it should be but they need to evidence that as research has revealed that it was given to the people of Ramsgate for public use. It was discarded many years ago and we bought it back to life. It is now being used by people of Ramsgate. It seems a waste of money to remove it.”

Janice said returning the base to Ellington Park is not the issue if it belongs there but filling the empty space at King George VI with tarmac is ‘disgraceful’ and the ‘promised’ replacement is needed.

Janice says she understands some £10,000 was to have been set aside for a replacement although this has not been confirmed by Thanet council. Ellington Park’s project manager has said she is not aware of this pledge and the fountain base “is  an important aspect of the heritage of Ellington Park due to its inscription and original location. The project is funded by Heritage Fund who have a strong historical interest in the park and have approved the return of the fountain as part of the plans.”

The couple have been told their claim will be investigated further.

Ellington Park is currently undergoing a huge renovation and refurbishment as part of a £1.8million project to create a new cafe, restored terrace, new playground and landscaping. Works are due for completion in early summer 2021.

A big year ahead for the Ellington Park regeneration project