Around 80 people put empty plates outside the office of South Thanet MP Craig Mackinlay today (October 27) in protest against his decision to vote against giving children free school meals in the holidays.

The protest took place outside Mr Mackinlay’s Broadstairs office. The plates had slogans including: “Feed the Kids” “Save A Quid and Starve the Kids”,  “24.7 % of Thanet’s Children Live In Poverty”, “There’s No Magic Dinner Tree” and “Eat Your Words Craig”.

One of the organisers of the protest, Independent Thanet councillor Candy Gregory, said: “It was an excellent turn-out, sending a message to Mackinlay that we care that the children in his constituency should receive a nutritious meal at least once a day. 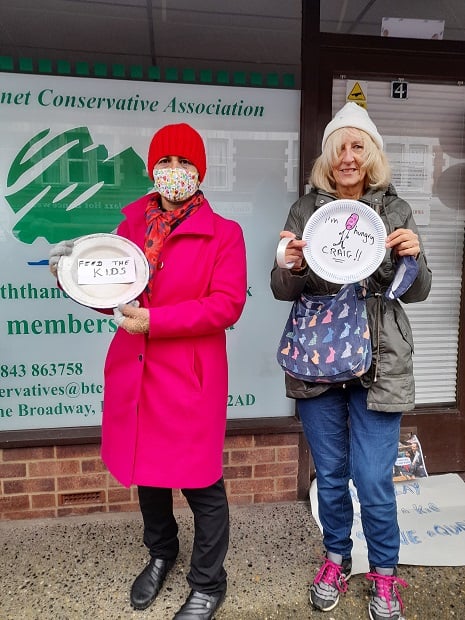 “The community has been fantastic but it’s the government’s responsibility to look after its people and they have failed miserably to do so. He had an opportunity to vote to continue with giving a school dinner in the holidays but chose to let them go hungry.” 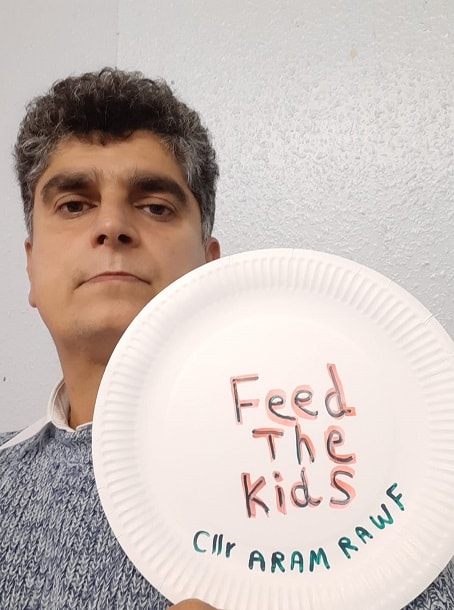 He said: “As a child in wartime Iraq I knew what it was like to go without food. I never believed a wealthy civilised country like the UK could let children go hungry. Yet this is what I see in poor areas like Thanet where food banks are increasing and our MP has closed his eyes to the needs of the children in this area. Craig Mackinlay’s decision to vote against free school meals is shameful.”

Ramsgate mayor Raushan Ara was also in attendance. She said: “This year many families will find they are in need of assistance, due to a fall in their incomes.

“Holiday hunger has been extended for many, and more children are being affected by this terrible blight on our society. Only by caring for all children in need can we ensure no child is left hungry.” 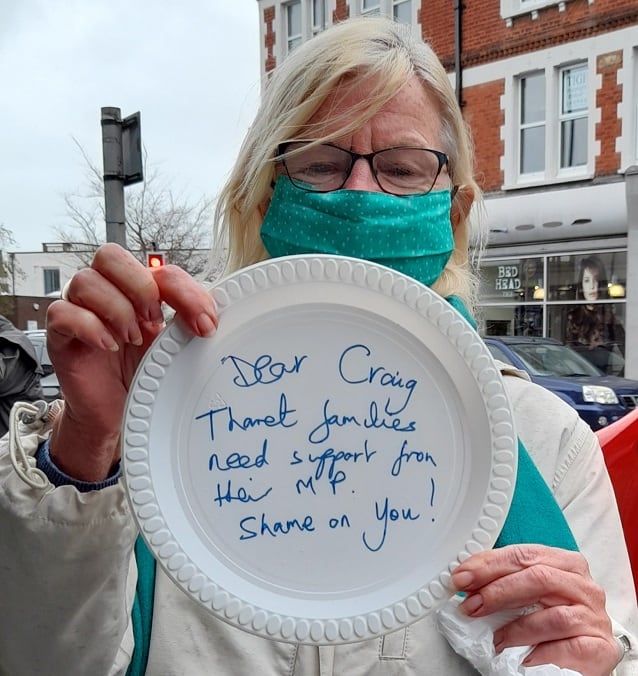 The protest follows an Opposition Day motion last week to extend free school meals into the holidays until Easter 2021.

Mr Mackinlay was among 321 Conservatives who voted against the extension. North Thanet MP Sir Roger Gale did not vote.

The failure of the motion, which was prompted by footballer Marcus Rashford’s campaign, has caused fury in Thanet and across the country.

But Mr Mackinlay says an amended motion, which he supported, outlined the help government is already giving to families in need. He added that an extension of funding to groups like Sharon Goodyer’s ‘Kitchen on the Isle of Thanet’ providing good food to communities they know, would be a better option.

Kent County Council announced yesterday that it would be providing vouchers for free school meals during the break.