Much-loved Westgate resident Wilfred Jenkins will be pedalling his way to Reculver Towers in a bid to help save the Theatre Royal and Winter Gardens in Margate.

The 24-year-old was diagnosed as profoundly deaf when he was two and, as a teenager, he was identified as being on the autistic spectrum.

But those hurdles do not stop Wilfred from living a full and independent life, being involved in events and clubs and testing out new talents such as his photography skills.

When he was  just 18 months old doctors predicted he would never walk, talk or live an independent life – they were wrong.

Wilfred has been involved in many campaigns, from trying to save the Royal School for Deaf Children in Margate where he was once a student to joining the protest last month over the introduction of an ‘active travel’ road scheme in Westgate which means the loss of much-needed parking bays.

Now he is throwing his weight behind the fndraiser for Margate Theatres which have been hit hard by the Covid pandemic restrictions.

Wilfred said: “ I wanted to help the Theatre Royal and Winter Gardens after I saw the news that they are at risk of closure. I wanted to help them because I am part of my local theatre group, Inspiration Creative  set up by Zoe and Peter Hammond. I have been performing shows with them in both theatres. 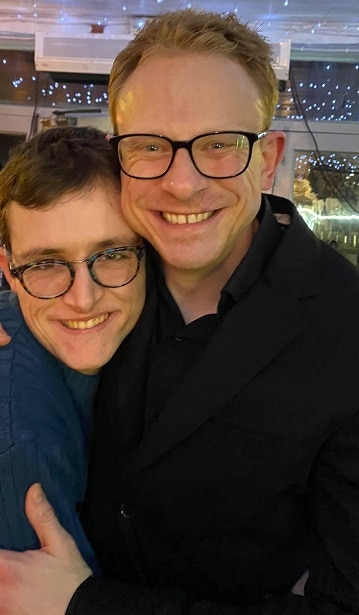 “I also wanted to help Lloyd Hollett (pictured with Wilfred above) as his comedy show kept being postponed because of the awful virus. The theatres are at risk of closure if there is not enough money to fund them.

“That is why I am fundraising with a sponsored bike ride from Westgate On Sea to Reculver Towers.”

Wilfred will undertake the bike ride on October 4. He has a fundraising target of £500.

Last month it was confirmed that staff at Margate Winter Gardens and the Theatre Royal, as well as Dover Town Hall, are in redundancy consultation with employer Your Leisure. It is understood up to 30 jobs are at risk.

Paul Palmer, Hospitality and Entertainments Manager for the Winter Gardens and Theatre Royal, said: “When the COVID pandemic caused the nationwide lockdown, Margate Theatres lost all of our regular ticket and bar income overnight; the pandemic shutdown the theatres and forced the mass cancellation and postponement of all shows and events, including the Margate Soul Festival and other marquee events that we rely on to keep the theatres running.

“We have applied for the Government funds that are available, however, it is unclear how much support we will receive, and we need more than is on offer to ensure Margate does not lose its iconic theatres.

“So far, we have done, and continue to do, everything in our power to fight off the threat of Covid-closure, however, as March has now become September, we’ve reached a tipping point.”