North Thanet MP Sir Roger Gale has asked the government to speed up a decision on the Development Consent Order for Manston airport.

The MP has made the request to the Secretary of State for Transport amid news that controversial plans for a third runway at Heathrow airport have been deemed unlawful because climate commitments were not taken into account.

The Court of Appeal judgement follows a case launched by environmental campaigners. Judges said for the third runway to go ahead it would have to fit with UK climate policy.

In response to the news North Thanet MP Roger Gale said: “In the light of the judgement on the third runway at Heathrow it is more important than ever that we get Manston up and flying again as swiftly as possible.  Post-Brexit Britain is going to need additional airfreight and passenger capacity of the kind that Manston can offer swiftly. The UK is as we speak losing business to Schiphol, Charles de Gaulle, Frankfurt and Dubai and that cannot be allowed to continue if we are to prosper as a trading nation after 31st December.

“Manston has been an airport for more than a hundred years, is designated as an airport in the Local Plan and is `shovel ready` in terms of development with many millions of pounds available for investment in a state-of-the-art net zero carbon modernisation.

“I have asked the Secretary of State to expedite the decision on the Development Consent Order so that work can commence without further delay. We have no more time to lose.”

It is not yet clear what impact the climate commitment ruling may have on the Manston application although the Secretary of State requested further clarification on RSP’s assessment of the carbon emissions contribution from Manston airport representing 1.9% from the total UK aviation emissions for 2050 and how net-zero emissions could be achieved.

Submission of more comments and further information were made in January at the request of Secretary of State for Transport – Grant Schapps – before the decision  over the development consent order to create an air cargo hub at the Manston airport site is made.

The decision had been due on January 18 but a written statement to Parliament made by Nusrat Ghani, Parliamentary Under Secretary of State for Transport said the latest delay means the outcome is now due to be announced on May 18.

The four month delay was due to “enable further information on a range of issues to be provided by the applicant and other interested parties before determination by the Secretary of State,” according to the Under Secretary statement.

Last year the Planning Inspectorate examining panel, led by Kelvin McDonald, examined the bid made by Riveroak Strategic Partners (RSP) to acquire the site and create a cargo hub and associated aviation business.

The land was owned by Stone Hill Park, which had submitted a planning application to create up to 3,700 homes, business and leisure and associated infrastructure. SHP sold the site to RSP subsidiary RiverOak MSE Ltd for £16.5 million in July, just before the hearings concluded.

In the latest documentation on the Planning Inspectorate website there were queries over unilateral undertakings with Kent County Council and Thanet council relating to the “appropriateness of RiverOak Fuels being the named party in those Undertakings,” and whether RSP’s contribution for the Air Quality Station ZH3 will ensure the Thanet Air Quality Management Area is not negatively impacted by the development.

Further areas included whether a 20 year contribution from RSP of £139,000 per year for schools affected by aircraft noise is adequate.

There were also queries raised about transport, including over controlled parking income and right of way improvements and the inclusion of a bus service enhancements scheme.

Confirmation of agreement to compulsory purchase a number of plots of land belonging to the Crown and companies including South Eastern Power Networks was also sought.

Comments were also invited on the revised wording of the draft DCO, including amendments to night flight restrictions and the need to provide an alternate High Resolution Direction Finder site.

DCO approval is needed for the cargo hub project. Supporters of the plan say it will bring jobs and economic benefits. Campaigners against the proposals say it will result in pollution, noise and a loss of tourist trade in Ramsgate which is under the flight path.

A spokesperson for campaign group No Night Flights,opposed to the cargo hub plan for Manston, said: “With Heathrow’s expansion being stopped because of its unacceptable impact on the Government’s climate change commitments, it is stupefying that our local parliamentary representative could imagine that building a whole new airport should be a pressing plan B.

“Maybe it is less surprising when one considers Gale’s role as President of the Government’s All Party Parliamentary Group for general aviation. The Secretary of State himself last month asked the organisation that Gale is so keen to see build a new cargo airport for detailed environmental reports which had previously been unforthcoming.

“We have seen zero evidence of net zero carbon emissions. We know that leading advisors to the Department for Transport, York Aviation, are very clear that there is no business case for an additional airport in East Kent with capacity already available at Stansted and East Midlands; we are clear that a cargo hub would hurt thriving tourism in Thanet, damaging local employment prospects; and we are all, as a nation, very clear that we need to put the future of our planet ahead of building unnecessary new airports.” 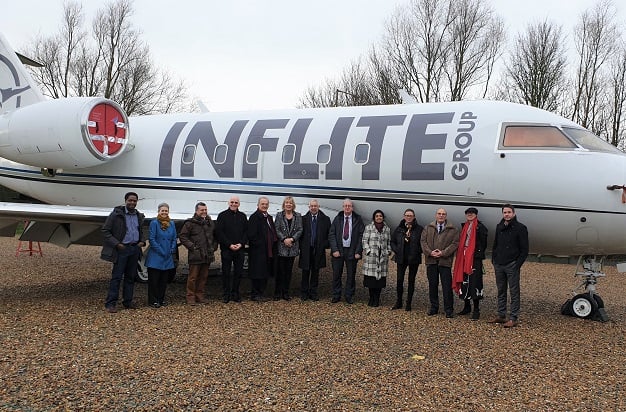 The Manston Skills & Employment & Board (MSE-B) met last week to discuss work on a range of training and education initiatives planned for the airport site.

The MSE-Board was established in January 2019 to consider the future employment and skills needs of the airport if Development Consent Order approval is gained from government this May.

The aim of the MSE-B is to ensure that Manston and associated businesses will have access to well-trained and experienced potential employees across a diverse range of skillsets. The MSE-B says it will do this by ensuring a comprehensive range of services are available to young people, job seekers and employers in the area around the airport.

The MSE-B says board representation is available to unrepresented local councils and business sectors.

Dr Sally Dixon, who has led the MSE-B project, said: “Properly planning the future employment and skills needs of any major infrastructure project always requires a long term view and a collaborative approach. For Manston, this means working ahead of approval of the DCO to ensure both we and the local community will be ready.

“The commitment and partnership spirit of the organisations involved in the MSE Board has been fantastic from the outset and we are extremely grateful to them for their ongoing support. Together, we are determined to maximise the pipeline of talent, and training and employment opportunities to support a reopened Manston Airport and new and existing businesses in Thanet and East Kent.”

Interim Chair of the MSE-B, Paul Winter, who also chairs the Kent & Medway Skills Commission, said: “I am delighted to be involved in preparing East Kent for the reopening of the airport. The area has significant deprivation and the number and range of jobs that will be created is a game changer. Although the airport is not set to reopen until 2023, we have to move quickly if we are to ensure we have sufficient related local education and training, apprenticeships at all levels, and suitable careers advice for people of all ages.”