The winner of the Turner Prize 2019 surprise announcement tonight (December 3) was that the artists had formed themselves into a collective – meaning the prize went to all the shortlisted artists.

The announcement was made by Editor-in-Chief of British Vogue, Edward Enninful OBE.

The shortlisted artists were Lawrence Abu Hamdan, Helen Cammock, Oscar Murillo and Tai Shani. Their work is on show at Turner Contemporary until January 12, 2020.

This is the first time in Turner’s 35 year history that all artists have been awarded the prize as a collective. In a statement the four artists spoke of racism, isolation and exclusion and said they were standing against this in a gesture of cohesion.

The award ceremony took place at Dreamland. Earlier in the day public events took place at Turner Contemporary, which was lit in rotating colours for the evening.

In a joint letter to the jury, the artists said: “At this time of political crisis in Britain and much of the world, when there is already so much that divides and isolates people and communities, we feel strongly motivated to use the occasion of the Prize to make a collective statement in the name of commonality, multiplicity and solidarity – in art as in society.”

The jury praised the artists for their commitment to the collective power of art. They noted that this unique and timely act of solidarity encapsulates the very reasons for which these four artists were nominated in the first place, as demonstrated in the works they exhibited at Turner Contemporary.

A statement from the jury said:“At our meeting today, we were presented with the letter from the artists and unanimously took the decision to agree to their request. We are honoured to be supporting this bold statement of solidarity and collaboration in these divided times. Their symbolic act reflects the political and social poetics that we admire and value in their work.”

Alex Farquharson, Director of Tate Britain and chair of the Turner Prize jury, said: “In coming together and presenting themselves as a group, this year’s nominated artists certainly gave the jury a lot to think about.

“But it is very much in the spirit of these artists’ work to challenge convention, to resist polarised world views, and to champion other voices. The jury all felt that this made the collective a worthy winner of the Turner Prize.”

One of the best-known prizes for the visual arts in the world, the Turner Prize aims to promote public debate around new developments in contemporary British art. Established in 1984, the prize is named after JMW Turner (1775-1851) and is awarded to an artist born or based in the UK for an outstanding exhibition or other presentation of their work in the past twelve months.

The jury is chaired by Alex Farquharson, Director of Tate Britain. Next year the prize will return to Tate Britain. 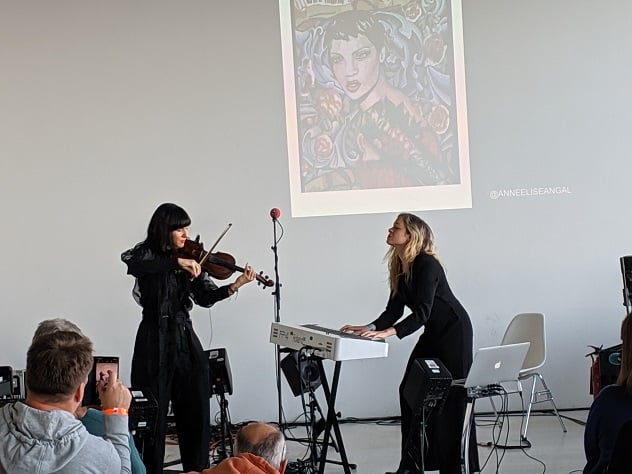 There were live performances from instrumentalist Erland Cooper and east Kent-based duo, AVA. Leckey told Mary Anne Hobbs winning the coveted prize in 2008 was  “blissful” but that today’s competition feels different- for the better -with less onus on artists trying to shock. 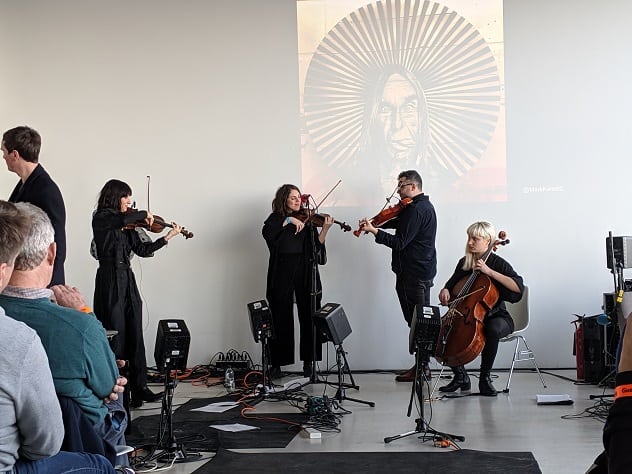 Broadcaster and local Gemma Cairney  chose a record from Margate musician, Falle Noike to play. The radio presenter also interviewed arts charity founder, Ollie Briggs on how  their organisation, Arts Education Exchange is trying help young people access the arts especially with Margate being one of the UK’s most deprived areas.

Deal-based musicians AVA then played live to a backdrop of artistic images projected onto the wall.

The show was wrapped-up by Erland Cooper whose ethereal sounds complimented the atmospheric winter sun and seascape visible through the gallery windows.