From 20 papier mache and straw effigies travelling by train from London to Margate to films focused on conflict, women and the Syrian prison regime and a huge mythical sculpture of ‘virtuous’ women – the Turner Prize has landed in Margate.

The exhibition opens to the public tomorrow (September 28) and runs until January 12, 2020. The winner will be announced on December 3 at an award ceremony broadcast live on the BBC as the official broadcast partner for the Turner Prize.

The effigies are the work of artist Oscar Murillo and represent capitalism, the political and economic climate and community. 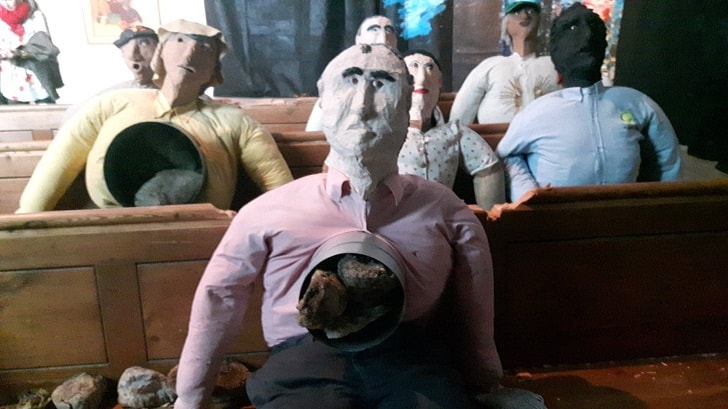 Sat in pews facing a covered North Sea view window, there is just a chink of light to represent home, the figures stare ahead, some with metal funnels going through them to represent the continual treadmill of work.

Behind them there is a  apainting by John Watson Nicol and on the walls are hazy paintings representing how people will see the world through rose tinted glasses.

A collection of canvases created by schoolchildren over a six month to one year period will also be on show.

Work by Lawrence Abu Hamdan consists of video, sound and a lightbox. Abu Hamdan presents a sequence of three time-based works stemming from research exploring ‘earwitness’ testimony: evidence heard rather than seen. This research originates from an investigation Abu Hamdan undertook with Amnesty International and Forensic Architecture into the Syrian regime prison of Saydnaya. Abu Hamdan conducted earwitness interviews with six survivors to recall their acoustic memories and solicit testimony about what was happening inside the prison.

Video, print and books feature in the work by Helen Cammock whose film The Long Note examines the overlooked role of women in the civil rights movement in Derry, Northern Ireland that began in 1968. Weaving together archive material, original footage and contemporary interviews, The Long Note connects the struggles for civil rights in Northern Ireland to broader class, race and gender struggles globally in the late 1960s.

A huge sculpture inspired by mythology, history and fiction plus performance and film, is included in the work by Tai Shani. For Turner Prize 2019, Shani presents a new installation version of DC: Semiramis. This four-year project takes inspiration from Christine de Pizan’s 15th century proto-feminist text The Book of the City of Ladies.  With DC Shani creates a world in which historical events, science fiction and myths combine, building a radical vision of a future world born of an alternative past. DC: Semiramis is made up of twelve chapters, each of which centres around a key character. All twelve chapters are presented within this installation, activating the theatrical setting via a newly-produced video narration.

The Turner Prize aims to promote public debate around new developments in contemporary British art. Established in 1984, the prize is named after JMW Turner (1775-1851) and is awarded to an artist born or based in the UK for an outstanding exhibition or other presentation of their work in the past 12 months.The Turner Prize award is £40,000 with £25,000 going to the winner and £5,000 each for the other shortlisted artists.

It is the first time that the venue for the Turner Prize, outside of London, has had a direct connection with JMW Turner. Turner Contemporary stands on the site of the artist’s lodging house and enjoys views of the skies that Turner felt were ‘the loveliest in all Europe’.

The exhibition is curated by Rowan Geddis and Fiona Parry. The members of the Turner Prize 2019 jury are Alessio Antoniolli, Director, Gasworks & Triangle Network; Elvira Dyangani Ose, Director of The Showroom Gallery and Lecturer in Visual Cultures at Goldsmiths; Victoria Pomery, Director, Turner Contemporary, Margate and Charlie Porter, writer. The jury is chaired by Alex Farquharson, Director of Tate Britain. Next year the prize will return to Tate Britain.

Victoria Pomery said: “We are absolutely delighted to be hosting Turner Prize 2019. This is a fantastic collaboration with Tate Modern. We hope the Turner Prize and exhibition resonates with our very diverse and numerous audiences we have at the gallery.”

Running alongside Turner Prize is Margate NOW, a festival of art, events and performances from isle-based artists.

The town-wide programme places artworks in unexpected places and  is guest curated by Russell Tovey.

Margate galleries also have a programme of events with The Eclectic Art Gallery in Margate Old Town one of those which is part of the In Margate 19 programme of cultural and creative activities this Autumn/Winter. Eclectic will open from 11am to 4pm daily in the first week of the Prize to share original 2d and 3d artwork, prints, and greetings/post cards, all produced by local artists and independent makers.

Other pieces on display in Margate include a knotted phone box in All Saints Avenue by ‘sliding house’ artist Alex Chinneck, high-octane performances in Making Waves and The Quartet exhibition at Lombard Street Gallery.

And the Tiina Turner Prize

Kavel Rafferty won the most public votes for her abstract concept for a new piece of public art to adorn Dreamland’s Mural By The Sea billboard.

Last month, local artists were invited to submit proposals to create a new work of art for Dreamland’s Mural By The Sea, inspired by the town, the upcoming Turner Prize 2019 exhibition at Turner Contemporary, and legendary singer Tina Turner (who Dreamland immortalised in a giant inflatable sculpture over the summer).

Three artists were shortlisted – Kavel Rafferty, Jack Can’t and Megan Metcalf – and their concepts were put to a public vote, with Kavel proving to be the most popular.

The Margate-based illustrator and artist used old postcards of Margate, Dreamland and the Main Sands as inspiration for the concept. Using cuttings found from discarded magazines (avoiding text and images), Kavel used the negative spaces around these elements to find blocks of colour. She then used the random pieces to compose an abstract image in response to the postcards and her love of Margate.

The creative jigsaw will be transformed to the billboard using paints and printed paper, with some small sections of the original postcards included. The piece is intended to be colourful and positive, reflecting the ever-changing weather and light in Margate, the energy of the people, the town and the sea.

The artwork will be unveiled to the public on Saturday (September 28), during Dreamland’s Arts Weekend.