There are two types of people at Christmas: those who are far too excited about the whole thing, and those who don’t like it. In other words, we are all either Buddy the Elf or the Grinch.

I’ve always fallen more into the latter, finding Christmas a bit tacky for my tastes. Some aspects of it I enjoy though, like spending time with family and friends, giving gifts to others, and telling ghost stories. The last one in particular is something of a lost tradition, which is a shame.

Regular Thanet visitor Charles Dickens told ghost stories every Christmas, his most famous being A Christmas Carol, and I like the idea of swapping scary stories around a fire come Yuletide.

Despite these brilliant parts of the festivities, there is a lot that I don’t like about Christmas, and with good reason.

Two-thirds of the entire world’s Christmas decorations are made in what amounts to a city of factories in China. Enormous quantities of plastics are used in the manufacturing, painting, coating, glittering, wrapping, shipping and distribution of all these decorations. Santa’s workshop it is not.

Add in the intensive commercialisation of Christmas and the increase in single-use products—from clothing to novelty gifts, and everything between—and suddenly what should be a festive time of celebration and caring becomes an annual period of guilt and moral questioning. What would the baby Jesus think?

Now before you start thinking of me as some kind of Scrooge, I’m not trying to ban Christmas. Also let’s be honest, I look nothing like Michael Caine, who is clearly the definitive Ebenezer Scrooge. I’m just trying to avoid single-use items, and valuing the tangible things I deal with.

For example, although ebooks may have made reading more accessible and shrunk a library into your pocket, I still prefer a good old-fashioned book. When it comes to physical versus digital, I am wholly on the side of real items.

On the subject of books, I’ve been published fairly widely this year. I have written both fiction and non-fiction for magazines and online publications, yet the thing that stands out is a story I wrote being included in Shoal, as it is a real physical book which I can hold. You can pick it up from the shelf in Waterstones in Westwood Cross, flick through the pages, find my name amongst them—along with many other brilliant local writers including Charles Dickens—and then, once you’ve paid for it, you can wrap it up and give it to someone for Christmas. 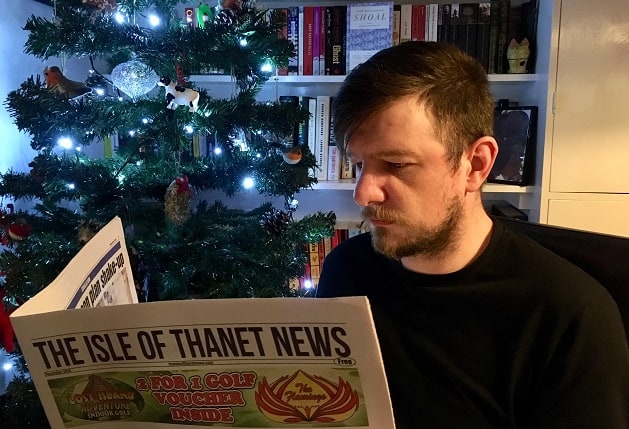 Having written this column for The Isle of Thanet News since shortly after launch, it was a welcome surprise to be asked to contribute a piece to the first ever print edition of this newspaper, which is out now. If you haven’t already, make sure you pick up a copy! Then, once you’ve finished with it, pass it on to someone else so they can read it too.

Getting back to the idea of ghost stories, however, has got me thinking about the unusual activity that happens in Thanet. After all, there is nothing scarier than a true story.

Perhaps this Christmas Eve, when everyone is gathered together, take the opportunity to tell a spooky tale. You might even find others join in, and before you know it you’ll have spent the evening swapping stories of ghosts and goblins, like the one about the old man dressed in red who breaks into your house in the middle of the night.

He knows when you’re sleeping. He’s made a list and checked it twice. He’s coming to town.