Campaigners protesting against plans to remove the emergency stroke service at Margate’s QEQM Hospital have held a demonstration outside a Ramsgate GP surgery.

Members of Save Our NHS in Kent (SONIK) held the protest outside Dashwood House which is where Dr Jihad Malasi is based, one of two Thanet GPs who are members of the clinical commissioning committee due to decide on the future of Kent’s stroke services in January. The other Thanet GP is Dr John Neden of the Eastcliff Practice.

A spokesperson for SONIK said: “Dr Malasi and Dr Neden will have a say in the final decision on the closure of Thanet’s only stroke unit. We are appealing to them in the strongest terms to do all they can to keep the unit open.”

The NHS in Kent and Medway – which includes all 8 Clinical Commissioning Groups – Bexley in south east London and the High Weald area of East Sussex, has plans for three hyper-acute stroke units in Kent and Medway with services earmarked to be provided at William Harvey Hospital in Ashford for all east Kent patients. 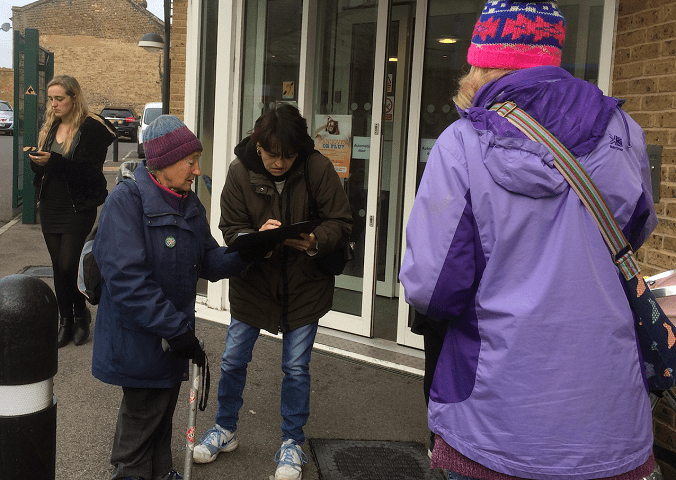 Campaigners say that when ambulance response times are taken into account the journey to Ashford from the isle may take around two hours.

A SONIK spokesperson said: “We believe patients have a right to know that their doctors are about to take a decision which may have a huge impact on their lives and the lives of their friends and family and to tell them what they think of that decision.

“This is the final stage of the process, the decision is in their hands. They know about the serious flaws in the plans, because we have sent our briefings to them on more than one occasion. We hope they will take this into account and reach an evidence-based decision.”

Campaigners are determined to keep the pressure on, with more action planned.

The spokesperson added: “We are planning more protests and more events. This is literally a matter of life and death for the people of Thanet. We must keep the stroke unit open.”

The final decision on hyper-acute unit locations is expected to be confirmed in January or February.

As part of the review, health professionals in Kent and Medway say they will also be improving stroke rehabilitation services.