Shoal, a collection of short stories by Thanet-linked writers, will be launched on Monday (May 7) at the Margate Bookie literary festival.

Edited by Alice Olivia Scarlett, and with a foreword from bestselling Ramsgate author David Lee Stone, the anthology is the first print publication by Thanet Writers, a non-profit community organisation and publisher.

The launch event for Shoal at Turner Contemporary will feature readings from a selection of isle authors published in the anthology, followed by a book signing with most of the writers.

The Margate Bookie has announced there is a high possibility of champagne!

One of the writers featured in the book, Sam Kaye, said: “I am so unbelievably privileged to have my story published in this anthology. To be included with such talented authors is simply amazing.” 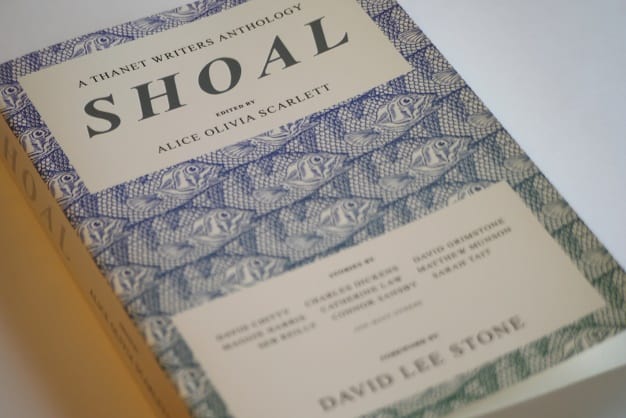 The book promises a mix of stories, from funny to magical, mournful to grotesque. It has been described as ‘the voice of Thanet’s writing community.’

Alice said: “When the editorial team and I were organising the entries for Thanet Writers’ first anthology, it struck me how much common ground all the stories shared. We hadn’t set a theme, and we hadn’t broadcast a specific subject we wanted people to write on, but still we could see the same threads running through every entry.”

To offer a feel for the stories featured in Shoal, Thanet Writers has released a book trailer:

The video features voice-over from several of the authors who have stories published in the book, and was scored especially with an original composition commissioned for the trailer.

Among the line-up in the book, and at the launch event, is Catherine Law, who has just published her fifth novel, The First Dance, to critical acclaim. Also appearing is Maggie Harris, who has won the Guyana Prize for Literature and the T.S. Eliot Prize for Poetry.

Along with Alice Olivia Scarlett and author David Lee Stone, local writers (and The Isle of Thanet News columnists) Matthew Munson and Seb Reilly will be speaking.

Shoal will be on sale throughout the Bookie exclusively at the Margate Bookshop pop-up store in the Turner Contemporary for £9.99, and available in bookshops and online from next week, with all profits being invested in the writing community by Thanet Writers to support writing in the area and promote education, culture and the arts.

David Rowden, a Director of Thanet Writers CIC, said, “Before I joined Thanet Writers, I naively thought that I was the only writer in the area. I had no idea that there was this amazing community. Since then I’ve seen the authors and poets of the area blossom in every way, and that’s because of the people involved, who are coming together to support each other.

“I have never seen a more welcoming and nurturing community than the creative people of Thanet. On behalf of Thanet Writers, I am humbled to have the opportunity to share just a fraction of some of the fantastic talent that’s on display on the Isle. We’re very proud to share our first Thanet Writers anthology: Shoal.”

Shoal is available to pre-order now from Waterstones by clicking here. For more information and links to other retailers please visit thnt.uk/aShoal

The launch takes place at 2.30pm.
Tickets are £4 and that includes a £5 voucher for the anthology (RRP £10) from https://margatebookie.com/tickets