Caremark Thanet support worker, Mark Bailey was diagnosed with Parkinson’s disease in 2019. Mark has been very positive about his diagnosis and wants to help and support others with Parkinson’s.

Mark devised a Parkinson’s training programme for new and existing carers. This has now been incorporated into our intense induction schedule, where Mark delivers training in Diabetes and Equality and Diversity as well.

Mark has become the Treasurer of the South East Research Group Parkinson’s UK and he wanted to start the new year with a new challenge so he decided to walk the equivalent distance to London, 70 miles in 7 days.

Mark shared his idea with family and friends and co-workers who are keen to support him by participating in the event, including care-coordinator Gemma Haffenden, Mark’s young grandson and his dog Angel. On the last day of the event, Mark shall be joined by members of Parkinson’s UK who have provided t-shirts for all participants. Angel the dog has her own bandana to wear.

The walk takes place on 19 April. Mark will take things slowly as he suffers with epilepsy and the painful condition osteoarthritis. The last day will finish in London on 26 April.

Mark said: “My journey won’t end after the walk, as already I am thinking of what to do next. I won’t give up or give in and in the words of the famous song, I get by with a little help from my friends.”

If you would like to donate, please visit Mark’s Just Giving page: justgiving.com/Mark-Bailey64

Parkinson’s is a progressive neurological condition. This means that it causes problems in the brain and worsens over time.

There is currently no cure for Parkinson’s, but there are lots of different treatments, therapies and support available to help you manage the condition.

We are delighted, thanks to our lovely supporters, some new items funded by our charity are now in use at the Hospital:

Rainbow Children’s Ward is benefiting from two phototherapy systems used to treat jaundice in the very young: a Bilisoft shown being demonstrated by Paediatric Practice Development Facilitator Debbie Towner and a MaviLED. They both use special blue light technology with each used depending on the baby’s needs. Also, Debbie added “The Bilisoft can be used when mums are feeding their babies.”

Patients receiving laser eye treatment can now do so in greater safety and comfort thanks to a specialist chair we financed. In giving her thanks Ophthalmic Nurse Specialist Stella Adegoke, shown with Ophthalmic Technician Kelly Kearon demonstrating the chair, said “The chair’s big advantage is that it reclines and can be converted into a couch in an emergency. Also, patients have commented how comfortable it is.”

Please check out our webpage – www.ekhuft.nhs.uk/lof-qeqm – for details of the ways you can help us fund similar items in the future to benefit the patients and staff at the QEQM Hospital  and follow us on Facebook.

Off The Hook Productions 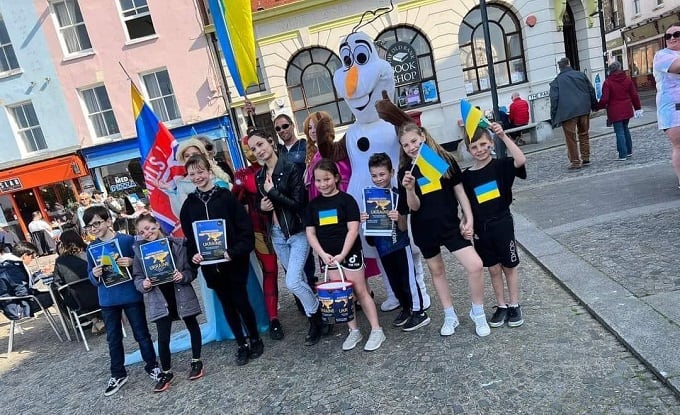 Off The Hook productions, based in Margate, have staged a performance and fun event to raise money for the Ukraine aid effort.

The event featured performances from Off The Hook youngsters, singing, face painting and a children’s fun hour. 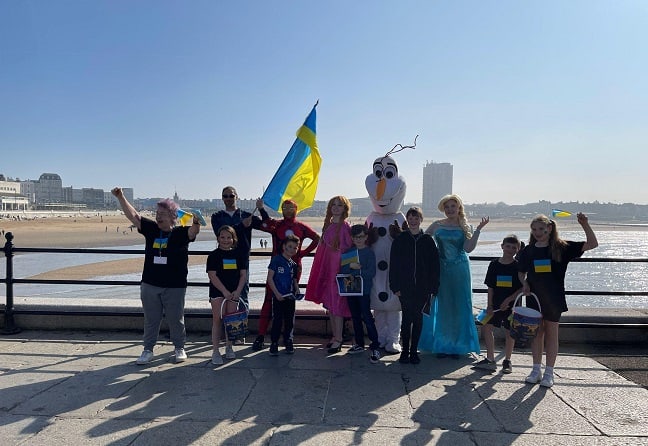 Off The Hook boss Rachel Hamlin said: “We raised £724.83 for the refugees coming over from the Ukraine. One young girl who was on the piazza, is from Ukraine and she was very emotional to see this event. 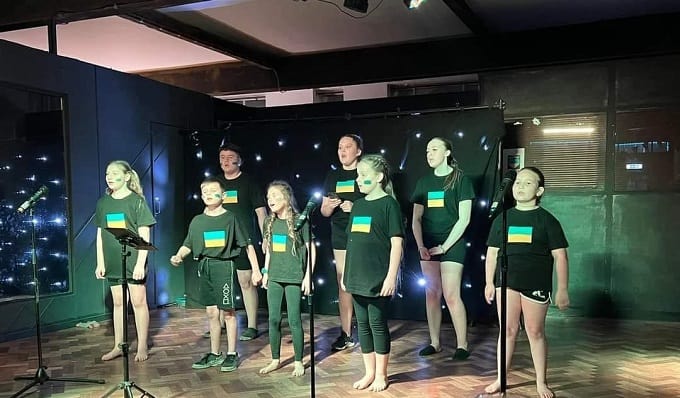 “It was an amazing success and we would like to say a huge thank you every business involved in this. Collectively as bar and dance school this meant a lot to the staff and children involved. Jack Packman of the SEK group helped with the count and suggested splitting the money between the Salvation Army who are helping with the refugees settling in Thanet and the Ukraine humanitarian appeal.” 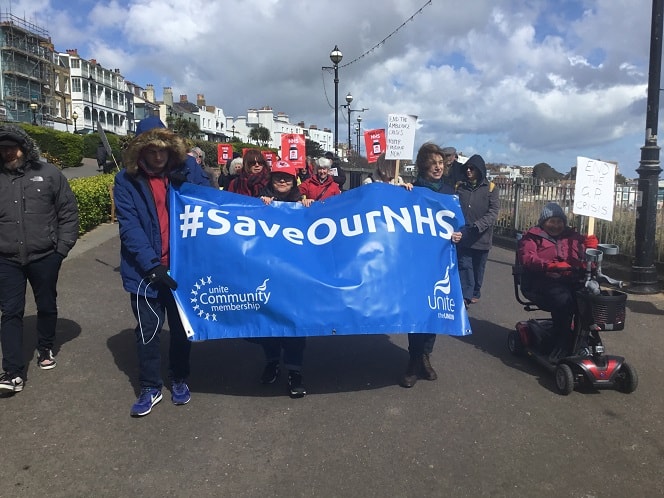 On Saturday 2 April campaigners marched in Broadstairs calling on the government to reverse the decline of the NHS.

Save Our NHS in Kent (SONIK) demanded the government provide emergency funding to the NHS, invest in a fully publicly owned NHS, guarantee free healthcare for future generations and pay staff properly.

Candy, who is an independent councillor for Thanet, added: “We are going to fight and fight again to warn people about what’s going on. We can’t let our NHS become a cash cow for the government’s cronies such as we have seen during the pandemic. We have to fight for a new, better, stronger NHS. It’s worth fighting for!” 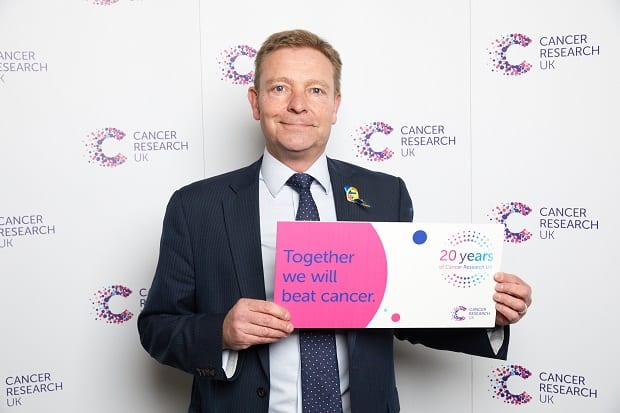 South Thanet MP Craig Mackinlay celebrated the past, present and future of research at a Cancer Research UK event in Westminster this week to mark the charity’s 20th anniversary.

The South Thanet MP had the chance to meet with researchers working on the latest breakthroughs and campaigners helping to deliver change in their communities, alongside learning about the cutting-edge discoveries taking place on his doorstep.

Mr Mackinlay said: “Over the years, the advances that have been made in the fight against this disease have been fantastic, and now more people than ever are surviving their cancer. But, there’s further to go.

“1 in 2 of us will get cancer in our lifetime. We all have a part to play to help beat it, because if the worst happens, we can help to save the lives of more people in our constituency and across the UK.”

2022 is a special year for Cancer Research UK, as it marks 20 years since the charity was formed. However, its history goes back much further, to 1902, with the founding of the Imperial Cancer Research Fund – meaning its work has been at the heart of some of the biggest developments in cancer, including some of the most used cancer drugs around the world today.

Shaun Walsh, Head of Public Affairs and Campaigning at Cancer Research UK, added: “A big thank you to Craig for joining us to raise awareness in our 20th anniversary year. Every day we see the benefits of work we’ve previously funded being realised, helping people live longer and healthier lives.

“Thanks to our supporters, partners, researchers and staff, we will continue to fund groundbreaking research to reveal more of cancer’s secrets. By putting discovery at the heart of everything we do, and working with people around the world, we can make huge strides in our understanding of cancer and how to beat it.” 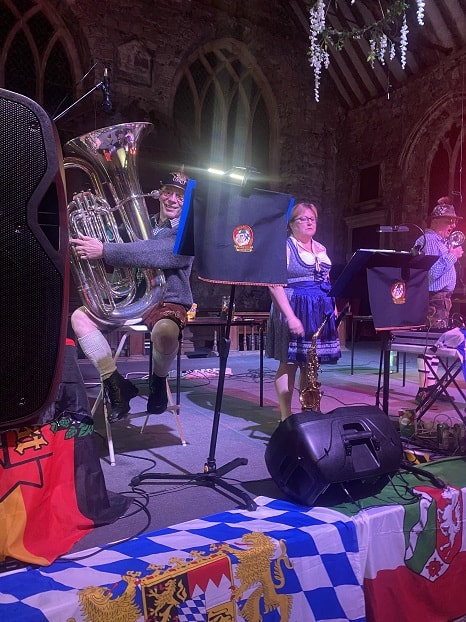 A well-known annual event for Martha Trust has taken place at St Marys Arts Centre in Sandwich . The venue was transformed into a traditional Bavarian Night out to raise funds for the residents at Martha Trust with profound disabilities

The Kent based Bavarian style band -Bettesteiner Footstompers, as seen on The Alan Titchmarsh Show, are popular all over the South East and in London, had the crowd singing and dancing and volunteers dressed in costume went round the tables serving beer and wine all evening.

Steve Griffiths (aka Stefan from The Bettesteiner Footstompers) said “We were absolutely delighted to have performed at the event. We all agree that the work Martha Trust does is of immense value to many people, so it is really exciting for us to be able to make our own contribution.

“We try to be as traditional and accurate as possible and have numerous stories of how we have convinced Bavarians and Austrians in the audience that we are actually from Germany.
Our whole act is built around the concept that we want our audiences to leave the show feeling that they have had a really fun evening and, ideally, be hoarse from singing so much which they did!”

As well as great entertainment, food and drink , there was a game of heads n tails where one guest won £50  , a raffle and an auction – the whole evening raised an incredible £5959!

Fundraising & Events Officer Kerry Banks BEM said: “It was a truly fantastic event that has been enjoyed by so many over the years. We are incredibly grateful to Sandwich Community Events that covered the cost of hiring the fabulous venue St Mary’s Arts Centre and to Siobhan Matthews and Steve Laslett for their support– the building is spectacular and perfect for this event!

“We are so lucky to have the ongoing support of The Bettesteiner Footstompers who we absolutely love!.

“Thank you also to our amazing Volunteers , to our Sponsors  Agents Giving, Sandwich Coop, NWR Ltd, Korkers Sausages and Bakkavor /Tilmanstone Salads and to our raffle and auction prize givers who all help to make the event a success.”

Next year’s event will be on Saturday 18th March 2023 so save the date as for the past 2 years this event has sold out in advance of the evening.

If you would like to Sponsor the event, please email kerrybanks@marthatrust.org.uk or call 01304 610448 to hear what opportunities there are and learn  more about how your support will make a difference.