Three oil-covered birds have been found dead on sands between Ramsgate and Dumpton Gap.

He was upset to see the bodies of two seagulls and what he believed could be a stork about 10 metres apart.

Mark said:“I’m passionate about wildlife, and it was really shocking to find the three birds 10 feet apart between Dumpton Gap and Ramsgate Main Sands. They were covered in thick, sticky, black oil. 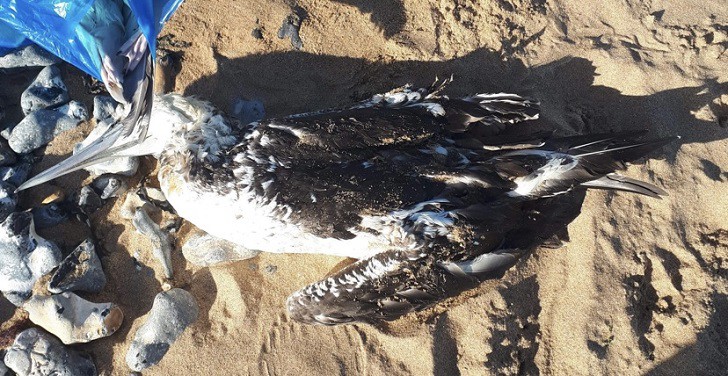 “I’d really like to know where this oil is coming from and what’s steps are being taken to clean it up and to stop this happening again. It was distressing to find the birds like this, and it’s sad to see wild birds killed in this way.”

Mark reported the incident to Councillor Karen Constantine who has notified Kent and Thanet councils and the RSPB.

Cllr Constantine said: “Like Mark, I want to know where this oil has come from and what can be done to prevent this happening again.”

She and Mark are asking residents to be on the lookout for any wildlife that has been injured or killed due to the oil.

On Wednesday (March 9) Thanet council issued a warning to dog owners to keep their pets on a lead at four isle beaches where oil deposits had been washed up.

The following day alerts were issued for four more beaches – Joss Bay, Kingsgate Bay, Botany Bay and Walpole Bay – but the oil has also been found along Ramsgate’s coastline,

A Thanet council statement says: “The affected areas are being cleared and warning signs put in place to advise beach users not to enter the area of beach below the high water mark in these locations until the warning signs have been removed.

“Dog walkers are advised to keep their pets on a lead at these locations.

“If you spot deposits of oil at any beaches other than those listed above, please telephone Thanet District Council 01843 577 000.”

The source of the oil is not known although it has been suggested it could be due to bunkering – transferring fuel oil from one ship to another vessel alongside off the coastline. This has not been confirmed.