An outline planning application to build 20 houses at the former site of Laleham School playing fields in Margate which was refused by Thanet council last April has been appealed.

Kent County Council and Orbit Homes applied to build the properties at the site off Northdown Park Road. The site is bordered by a 70-home development also from Orbit Homes where the former Laleham Gap School buildings used to stand. Those homes were granted permission in 2016.

The county council proposal was originally for 26 dwellings, comprising 7x 2 bed and 19x 3 bed houses. This was reduced to 20 after the design was amended

But the application was rejected due to concerns about  loss of playing field in an area that already lacks playing/green space, the negative impact on existing recreational areas and lack of legal agreement over affordable housing.

The proposed development is planned to be sited along the school boundary on the strip of land that runs alongside Reception and Year 1’s playground and the school field and forest school area.

Objections to the application had been lodged by the school, residents, community members and Sport England.

However, Kent County Council and Orbit have appealed the decision to the Secretary of State.

Parents and the school are urging people to lodge objections by the deadline on Wednesday (March 9).

Cliftonville Primary School headteacher Ms Whichcord said: “This will have a long term effect on the social, emotional and academic development of our children.

“We are very disappointed that there hasn’t been a greater degree of consultation with us around the plans and their impact on both our school and the local community.” 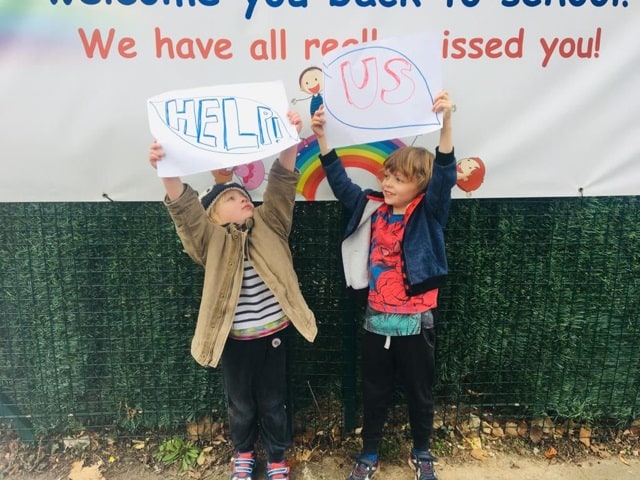 Parent Georgina Griffiths said there are numerous concerns about the development being so close to the school.

She said: “The children have a right to play and learn without fear of being overlooked by strangers and they need sunlight and clean air. Building directly next to the school will cause pollution, noise and stress to the children, staff and parents and carers.

“We need KCC do the right thing and keep this as a virtual green corridor that benefits  the entire community of Cliftonville.

“The Mulberry estate is already flooding due to poor drainage, there are no pavements for children to walk on so it is dangerous and an accident waiting to happen. Please help the children, haven’t they been through enough?”

The school and parents are being backed by district councillor Cedric Towning in their fight against the development. Thanet council will defend its rejection of the housing proposal.

In documents lodged for the appeal Kent County Council says: “KCC are required to seek best value for the site, and any profits will be directly reinvested into the county’s operations, which include funding for education provision.

“The applicant has sought to address all of the concerns expressed by the school. However, the school has expressed a fundamental wish that no development take place on the site, therefore it has not been possible to come to an agreement that is sufficient to overcome the objection.”

The appeal documents say Cliftonville Primary was given extra land following the sale of the former Laleham Gap site: “to allow for both expansion of building sufficient to accommodate increased pupil numbers in addition to increased hard and soft play areas.”

KCC say retaining the current mesh fence along the boundary and adding a low acoustic barrier will prevent overlooking between the sites while allowing light and views through to the green planting beyond.

Parent Kate Barrett says it is the wrong place for housing. She said: “I know houses need to be built but this is just the wrong place. It’s obvious this will have a huge negative impact on the children in the short and long term.

“ Imagine all the dust and building material pollution and then once built, this area is due to be parking so all the fumes will be directly going onto the young children. This is just a completely immoral position from KCC.

“Why would they want their residents to suffer in this way? They are now appealing to the Secretary of State but I can’t imagine she would want something like this happening near her child’s school! Have KCC forgotten that there is a climate crisis? If they consult their own biodiversity strategy, they’ll see that this land would be much better used as a green wildlife corridor.”

The disposal of the whole school site was part of a proposal to develop a replacement special school site for Laleham Gap. The school moved to its new home in Ozengell Place in Ramsgate in 2016

As part of the appeal process comments must be lodged by Wednesday. A date for the Planning Inquiry hearing is yet to be set.