The owners of a Russian and Eastern European restaurant in Ramsgate say the war in Ukraine could finish off their business because some people do not understand that they originate from the Eastern Block not Russia and are vehemently against Putin’s military attack.

Ramsay Taralis and Tanya Taraliene have run CCCP restaurant in Chatham Street for 12 years and are a part of the community.

Ramsay, who is from Lithuania, is also an on-call firefighter for Ramsgate fire station.

The pair, who have a secondary school age daughter, say they are against the invasion in Ukraine but have still suffered a drop in bookings and seen some unpleasant comments on their social media because people mistakenly believe they are Russian and also do not realise many Russians do not support Putin. 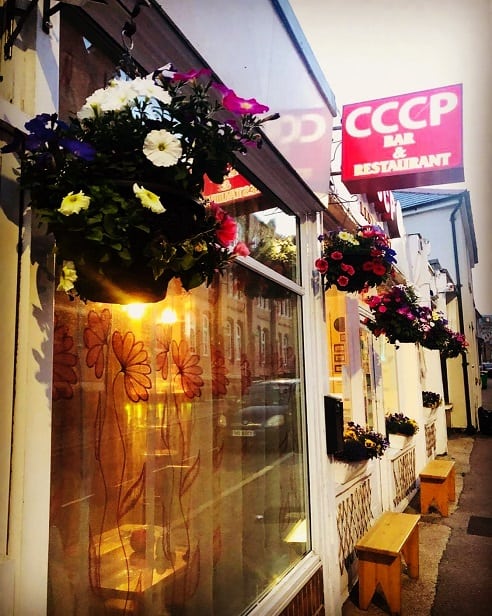 Ramsay and Tanya, who is from Belarus, say their focus is serving food and after surviving the trials of Brexit and then Covid they are now praying they can stay afloat despite Putin’s assault on Ukraine.

Ramsay said: “When it all started we had police in telling us if anything happens we should call them.

“Some people do not understand that we support Ukraine. Everything that is happening in Ukraine, and Belarus, is crazy, they have just pushed in without asking. It is just shocking what is happening, even Belarus has put the country in war for no reason.

“It is the top heads in Russia, they do whatever they want without listening to the people, they even tell them it is not a war.

“I worry for friends, one friend has gone back to Ukraine to fight, and I also worry for my family here, for my daughter who has things said to her on the school bus.

“We have a family run business, we are just cooking fresh food from the 15 countries of the old Soviet Union. Yes there are things of Lenin and items for the atmosphere but there is no Putin, it is all about the history, we are not supporting the war.

“We have put in 12 years of hard work and now it might finish.” 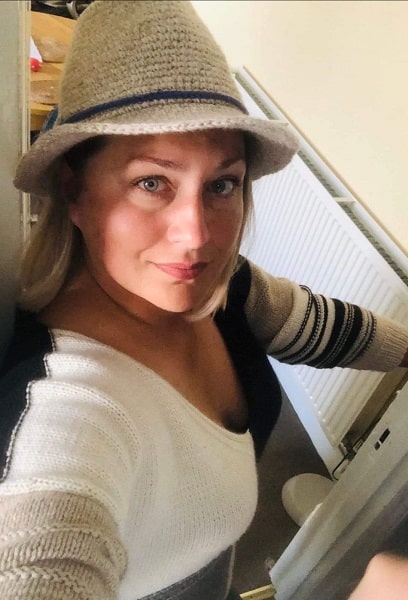 Tanya says she does not back the Belarus alliance with Russia forged by politician Alexander Lukashenko who has been serving as the president of Belarus since the establishment of the office in 1994 and is dependent on Russia for his grip on power.

Tanya said: “I am a Belarussian women who is against Lukashenko and Putin regimes. I have  family in Belarus and Ukraine. In Belarus people don’t have any rights anymore.

“I am standing for freedom in Belarus without Lukashenko and Putin.”

Tanya’s stance means to return to the country to visit family would now be extremely dangerous.

Putin’s military action into Ukraine on February 24 has since seen heavy artillery assaults in cities including Kyiv and Kharkiv.

More than 1,3 million people have fled from Ukraine with the vast majority crossing into Poland, Romania, Slovakia, Hungary and Moldova.

Partial ceasefire talks with Russia are said to be ongoing to create a humanitarian corridor out of Mariupol and Volnovakha but Ukraine says there has been continued firing on the area, breaching an agreement to hold fire and allow civilians to leave Mariupol today (March 5).

Demonstrations are taking place on the streets of Kherson, which was captured by Russia on Wednesday. 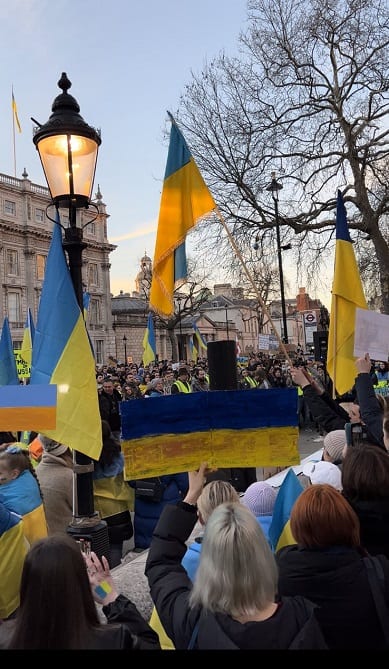 Demonstrations against the war on Ukraine also took place in London last weekend and again this weekend.

Ongoing anti-war demonstrations and protests have also taken place across Russia. The protests have been met with widespread repression by the Russian authorities, with over 6,500 arrests being made in the seven days from 24 February to 2 March.

The Metropolitan Police’s War Crimes Team is gathering evidence in relation to alleged war crimes in Ukraine in support of the International Criminal Court (ICC) investigation, which was confirmed by the ICC Prosecutor on 2 March.

The War Crimes Team is part of the Metropolitan Police’s Counter Terrorism Command and has national responsibility for carrying out any UK enquiries into war crimes and core international crimes. Detectives are appealing for anyone in the UK who may have direct evidence of war crimes in Ukraine from 21 November 2013 to present.

Evidence provided to and gathered by the Met’s War Crimes Team may then be shared with the ICC to assist with their ongoing investigation. At this time, and in line with jointly established guidelines with the Crown Prosecution Service, there is no UK-based investigation by the War Crimes Team into war crimes in Ukraine.

To report a suspected war crime to the War Crimes team, visit our online reporting tool at: https://www.met.police.uk/advice/advice-and-information/war-crimes/af/report-a-war-crime/