Turner Contemporary in Margate has been illuminated in the colours of the Ukraine flag in a show of support for the country as it defends against Russian attack.

Russian President Vladimir Putin’s declaration of war on Ukraine came on February 24 with an invasion along the entire Russian and Ukrainian border.

An update issued by the Ministry of Defence this morning (February 27) says Ukrainian forces have engaged the remnants of Russian irregular forces within the city of Kyiv for a second night.

The update adds: “After encountering strong resistance in Chernihiv, Russian forces are bypassing the area in order to prioritise the encirclement and isolation of Kyiv. Intensive exchanges of rocket artillery overnight have been followed by heavy fighting between Russian and Ukrainian forces in Kharkiv. Russian forces are continuing to advance into Ukraine from multiple axis  but are continuing to be met with stiff resistance from the Ukrainian Armed Forces.” 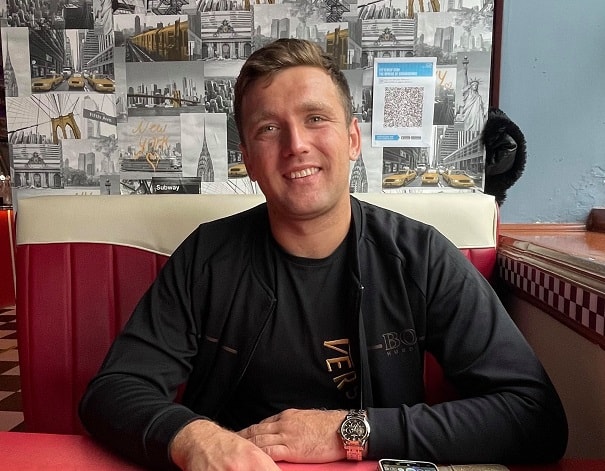 Ukrainian-born Volodymyr Slobodyan lives in Thanet and says he hopes the country can drive back Russia and that there will be international support.

The 27-year-old building developer and talented chef from Ternopil said: “ Unfortunately family are worried. It is hard times and already a lot of people have been affected by losing their houses. I hope it gets better.

“The boys are trying hard and the best to keep Russia away. The more help we get the better but hopefully we can do it.”

HMS Trent is in the eastern Mediterranean, conducting NATO exercises with Merlin Helicopters and RAF P8 Poseidon Maritime Patrol Aircraft. They will be shortly joined by HMS Diamond, a Type 45 destroyer.

Challenger 2 tanks and armoured vehicles of the Royal Welsh battlegroup have arrived in Estonia from Germany, with further equipment and around 1000 troops arriving over the coming days. This will lead to a doubling of the UK presence in Estonia, where the UK leads a NATO battlegroup as part of the Alliance’s enhanced Forward Presence.

RAF Typhoon fighter jets have already completed their first air policing missions across the region, with an additional four aircraft based at RAF Akrotiri in Cyprus. Typhoons flying from bases in Cyprus and the UK are now patrolling NATO airspace over Romania and Poland alongside NATO allies with Voyager air-to-air refuelling aircraft in support.

NATO Allies are collectively taking a range of measures to protect security and deter further aggression. At a meeting of NATO Heads of State and government all 30 member nations agreed that:

“We will make all deployments necessary to ensure strong and credible deterrence and defence across the Alliance, now and in the future. Our measures are and remain preventive, proportionate and non-escalatory.”