The film, by young female Director Daria Binevskaya, was watched by a packed audience at the Palace Cinema in Broadstairs last Saturday. Afrika tells the story of Egor, a boy living in utmost poverty in 1943 war-stricken Russia, and the military dog he names Afrika who he found injured on the battlefield.

Sylvie Bolioli, Director of RIFTVFest and Luba Balagova, president of SIFFA, introduced the screening. The event was part of SIFFA’s UK Programme, with films shown in Cheltenham Cambridge, Broadstairs/Ramsgate and London and concerts and the Awards Gala held at the Russian Embassy.

In the current climate, organisers say it was comforting to see the sell-out event attended by a mixture of British, Russian, and East-European people, young, old and families, with arts transcending boundaries and political differences. The viewers were treated to Russian cake baked by Ramsgate restaurant CCCP and a taste of J.J.Whitley Blue Raspberry Russian vodka.

After two years of a virtual only festival, the 6th RIFTVFest will finally come back in cinemas from June 9 -12, presenting a programme of world movies with a focus on accessibility for all. The hybrid event will offer in-person screenings, talks and workshops, with a selection of subtitled films and simultaneous signed streaming of talks online. 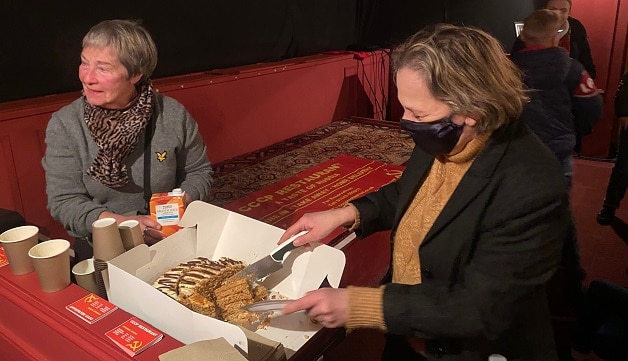 Russian cinema will also be honoured through a special selection.

The second edition of the Fight Back Film Awards, RIFTVFest’s new satellite event, will take place two weeks later on June 25-26 to coincide with Armed Forces Day. The international competition was created, not only to showcase the films that veterans have created in their struggle to overcome PTSD and other traumas, and re-integrate society, but also to encourage many more ex-forces personnel to use filmmaking and all its disciplines, to help them find a focus in their life and fight their demons.

Sylvie said: “We hope the event will also contribute to raising awareness on a section of the population often forgotten.”