A class of budding film makers are getting the chance to put on a cinematic experience through work with independent Broadstairs venue, Palace Cinema.

Media students at Broadstairs College are working with Palace Cinema to create an immersive showing of New Zealand film ‘Hunt for the Wilderpeople’ which will be open to the public on February 26.

Hunt for the Wilderpeople is a 2016 adventure comedy about a boisterous boy going on the run with his cantankerous uncle, starring Julian Dennison and Sam Neill.

During lesson time, the students visited the Harbour Street venue to watch trailers and select a movie they thought would appeal to most people.

Palace Cinema co-owner Corinna Downing, who runs the cinema with partner Simon Ward, said: “It was an interesting session because the students had to decide what would appeal most to their own audience. They decided that there shouldn’t be too much of a culture shock and that subtitles might put people off from coming.

“Also there was a fear that the subject matter shouldn’t be too dark. In the end, Hunt for the Wilderpeople was found to be the perfect balance between light and dark comedy, plus the main character is someone roughly their age.”

After selecting the Taika Waititi film, they then spoke to Corinna about the process of selecting films to be shown and the running of an independent cinema. Tutor Peter Brewster said his students learnt important lessons about the distinction between independent and chain cinemas, as well as the process behind distributing movies – normally the focus is largely on making films.

He added: “The whole collaboration with Corinna and the Palace Cinema has been fantastic, giving students a real-life glimpse into the world of independent cinema. They’ve also got to explore world cinema, how to market a release and how to create an immersive experience, all of which are increasingly important in the industry.” 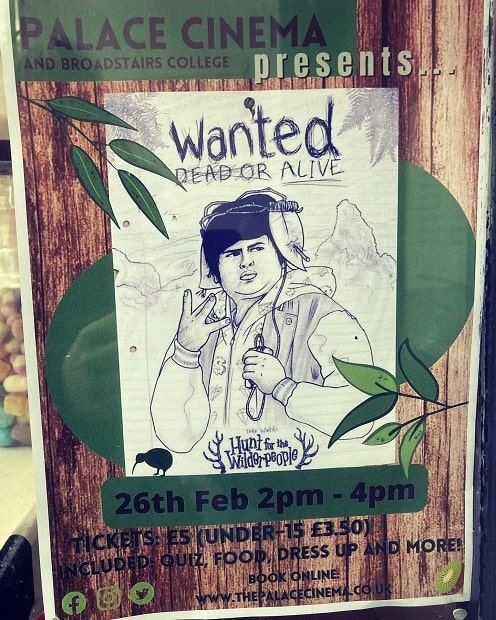 The immersive showing is part of a project called the Palace Cinema Passport Project, where the 111-seater venue highlights films from across the globe throughout February.

Corinna said: “It’s been fantastic working with such enthusiastic students, showing them what life is like as an independent theatre operator. Our Passport Project seeks to open people’s eyes to the wide world of films out there, and I think the learners made an excellent choice with Hunt for The Wilderpeople.

“We’re really excited to welcome people to their special showing and to see what they put on for this special performance. It’s been great working with the Broadstairs College team and look forward to doing more with them in the future.”

Broadstairs College’s immersive showing of Hunt for the Wilderpeople (12A) is Saturday 26 February at the Palace Cinema. Doors open 1.30pm for 2pm start and tickets cost £5 or £3.50 for Broadstairs College students (ID req’d) and children.

The event will feature a range of activities including a quiz, face painting and special introduction by the students. For more information and to book a ticket, call 01843 865726 or go to the Palace Cinema website here