Storm Eunice is now battering the isle and has brought down a chimney stack in Northdown Road, Cliftonville.

Brick debris has covered the road near the former CQ cleaning shop and Betfred. The road is currently cordoned off with police and fire service at the scene.

A Kent Police spokesperson said: “Kent Police is assisting following a report of a chimney collapse in Northdown Road, Cliftonville at around 12.05pm.

“Officers and partner agencies are at the scene and the road is currently closed between the junctions with Prices Avenue and Sweyn Road.”

Kent Fire and Rescue Service sent two fire engines to the scene and crews helped to make the area safe. No casualties were reported.

There are also reports of loose signs in Margate High Street, debris covering the bridge at Westgate after the milk chimney on the laundrette, a wall and a lamppost were brought down and a tree down in Sowell Street and another in George Hill Road, Broadstairs. A clock face on the Margate Clock Tower is also reported to have been blown out.

Residents in Westgate have braved the weather to clear away the debris from St Mildred’s Road but the route is currently closed to traffic.

The Jubilee Beacon at Minnis Bay has also been toppled by the gusts.

Storm damage also means Hartsdown Leisure Centre has been closed with immediate effect for the rest of today to ensure the safety of customers and staff.

The building will reopen tomorrow, however, the swimming pool will remain closed until further notice.

To discuss a booking email cst@yourleisure.uk.com 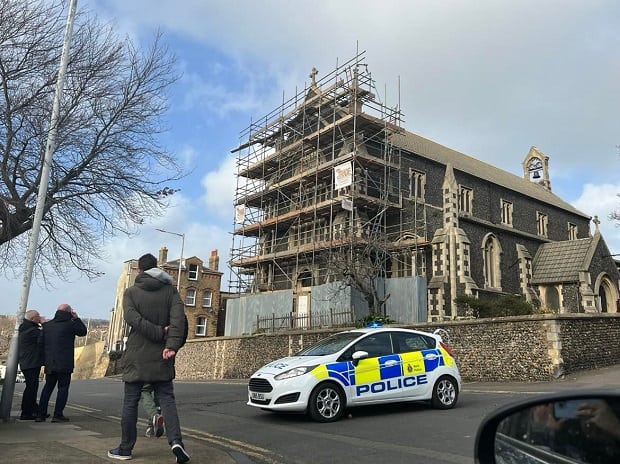 Part of Victoria Road in Ramsgate is also shut from the corner by Bellvue Road due to high winds affecting Holy Trinity Church.

Father Blanch said: “Holy Trinity Church in Ramsgate has sustained serious damage today in the high winds. The Bell Cote and bell are now unsafe and structurally compromised, thus making the Church unsafe to use. Our architect, diocese and insurance company have all been informed and we are acting on their advice.

“No Sunday Mass this Sunday or weekday worship until further notice. Parish Mass will be at St Andrew’s in Deal at 11am.”

An upper floor window has also be blown out at Poundland Ramsgate and scaffolding has been ripped loose at Charles Dickens School. In Margate Marine Terrace and All Saints Avenue have been closed after hoardings came loose by the former Arlington shopping arcade.

A lorry had blown over on the dual carriageway from St Nicholas roundabout towards Monkton. A Kent Police spokesperson said: “Kent Police was called at 1.20pm to the A299 at the St Nicholas at Wade roundabout following reports a lorry had been blown over onto its side during the storm. Officers attended, no injuries were reported and the lorry was not blocking the carriageway.”

Kent Fire and Rescue Service has been called to Broadstairs due to part of a roof being ripped off a property containing flats during the storm.

Victoria Parade is currently closed off as the fire crew work to make the area safe.

Resident Emma  Chaudhry said she called emergency services after being alerted by a huge crash at her home.

She said: “There was a huge bang and when I looked out my front window I saw the carnage.

“The chimney pot flew off and smashed too. It’s a blessing that no one was hurt and no cars were damaged. A lot of people were in Morelli’s, right next door, at the time

“The fire brigade arrived in minutes and are doing everything they can for public safety They have cordoned off the road and are trying to safely remove a huge piece (of roof) that is hanging now.”

Emma lives on the lower floors sustained no damage to her home but firefighters are trying to seal the hole left in the roof of the top flat.

Services on Southeastern and Stagecoach have also been cancelled due to the extreme weather.

A red weather warning has been issued for the south east, including Kent, as Storm Eunice causes significant disruption.

Gusts of 60-70 mph are likely widely, but the Met Office says wind gusts in the most exposed coastal areas could be in excess of 90mph, which would bring significant impacts for many and represent a danger to life. The red warning is in place between 10am and 3pm with an amber warning remaining in place up until 9pm.

Met Office Chief Meteorologist Paul Gundersen said: “After the impacts from Storm Dudley for many on Wednesday, Storm Eunice will bring damaging gusts in what could be one of the most impactful storms to affect southern and central parts of the UK for a few years.”

“The red warning areas indicate a significant danger to life as extremely strong winds provide the potential for damage to structures and flying debris. Although the most exposed coastal areas could see gusts in excess of 90mph, winds will remain notably strong further inland, with gusts of between 60-70mph for most within the amber warning area, and up to 80mph in a few places.”

Kent Fire and Rescue Service has so far (3pm) been called to attend over 60 storm related incidents across a number of Kent and Medway.