Around 100 people turned out for a double demo at the Viking Ship play area and Dane Park in Margate today (February 13).

Protestors at the Love Our Playgrounds demo were urging Thanet District Council to save the bespoke Viking Ship and other equipment at the playground in Ethelbert Crescent.

Play pieces, including the ship, are due to be demolished and replaced with nine new pieces using community parks funding of £169,517.

But campaigners from Friends of Cliftonville Coastline are urging Thanet council to reconsider saying the original installer of the Viking Ship has quoted £27,000 to refurbish the entire playground based on a Royal Society for the Prevention of Accidents report – meaning funding could be diverted to other play areas such as Dane, Tivoli and Laleham parks. 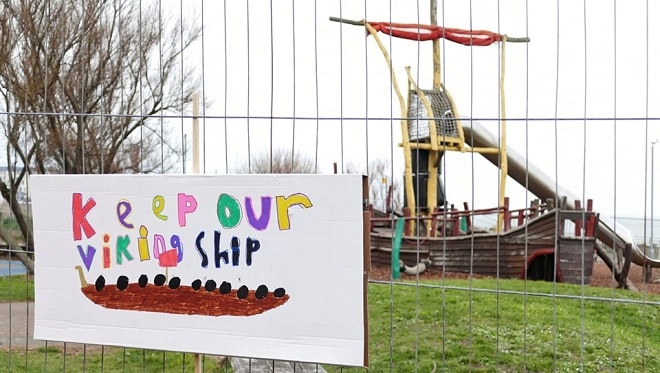 A spokesperson for the group said: “Why has this option not been considered as best value for our money? Vast sums of grant funding are periodically used to replace play equipment, but this is not only ecologically unsustainable, it does not solve the endemic lack of upkeep and maintenance that blight our playgrounds, meaning that children must put up with inferior play areas year in year out.”

Campaigners say a refurbishment instead of replacement works would mean there were funds to tackle the ‘overcrowded’ Dane Park play site which is “currently missing two much needed slides.”

The funds for the Viking Ship play area replacement work come from a £211,280 allocation from Kent County Council for Community Parks

People are now being directed to use Dane Park while work is undertaken at the Viking Ship playground.

New equipment for the Viking Ship site has been ordered and is being manufactured by supplier Kompan. Work is expected to start at the end of March and finish in late May. There are nine new play pieces featuring inclusive apparatus such as a wheelchair carousel. 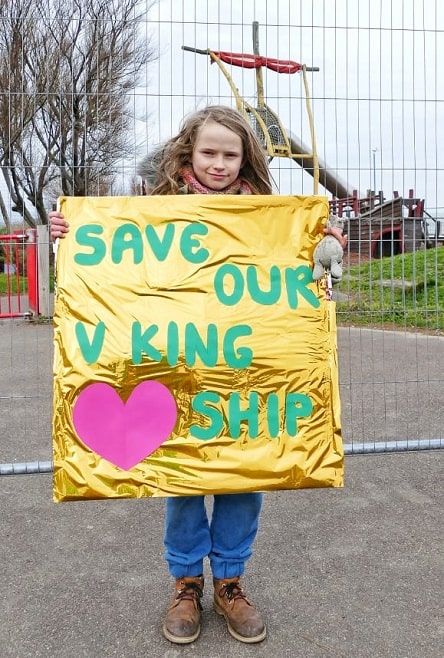 Ward councillor Alan Currie said: “TDC have quite rightly acted on the safety inspectors advice that the Viking Ship playground be shut down. However, the unexpected and welcome KCC Community Parks funding has come at a crucial time to give Cliftonville West a new high quality nine apparatus playground that might not be to some residents’ taste but I hope the children will love it.

“The funding was time limited and TDC Officers have had to act quickly to get everything in place and this has meant that prior community engagement was not possible which is a pity..
“Maintenance costs and inspections for the Viking Ship had become unsustainable and once the new playground is installed this will mean more funds that can go towards other play areas in Thanet.”

Funding of £4,000 has also been allocated for painting of play equipment and fencing at Crispe Park in Birchington. Another £14,700 will be used for safety surfacing at Northdown Park and there is a provisional allocation of £16,000 for boundary fencing at Memorial Recreation Ground, Broadstairs.

Find Friends of Cliftonville Coastline on Facebook at https://www.facebook.com/events/930934770896103