A talented Cliftonville schoolgirl has had her short story published in a Young Writers anthology.

Elsie Skillen entered the Young Writers competition to pen a mini saga of 100 words with the theme A Wander in the Woods.

The Cliftonville Primary pupil, aged 9 when she wrote her story and now aged 10, was one of those chosen to feature in the anthology which was published at the end of last year. Her tale features a surprising twist at the end!

Mum Steph said: “She was really pleased and happy she won but wasn’t sure how to deal with the attention!

“We were definitely proud and let all our friends and family know.

“Elsie is quite creative and at an age where she is trying out a lot of things. She likes drawing, painting and writing and I hope it is something she will pursue.” 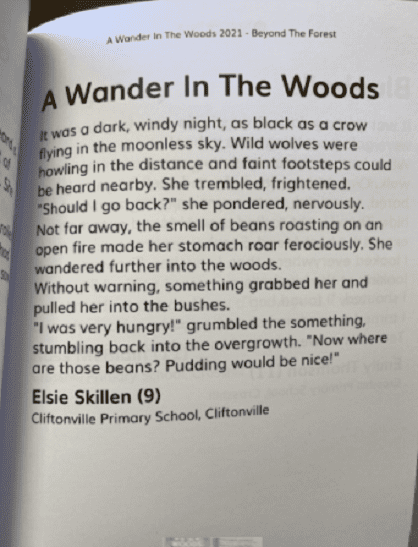 Young Writers runs a variety of competitions for school children with the mini saga aimed at those aged 7-11 years old.