Thanet accounted for 11% of modern slavery/human trafficking reports made in east Kent in the last six months including fears of sexual and labour exploitation of young women at a food outlet and a case of suspected forced labour.

Between August 2021 and this month there were 12 Thanet reports of modern slavery and/or human trafficking.

Eight related to adults and four to children and included a range of criminal actions from County Lines drug running to forced labour.

These were categorised as:

Chief Insp Smith said work to tackle the exploitation was carried out by partners in the Multi Agency Task Force. These include officers from Kent Police’s Modern Slavery and Human Trafficking team, the Gangmasters and Labour Abuse Authority (GLAA), Border Force, Thanet council, Kent Fire and Rescue, HMRC and Dept for Work and Pensions.

Three examples were given of reports in Thanet from Margate, Broadstairs and Ramsgate.

One of these involved people working illegally in the country in a restaurant. The site was found to have 6 rooms in the basement with beds and belongings where people were living in poor conditions. KFRS served a restriction notice and, in a follow up visit, two people were taken to Margate police station to be interviewed by revenue and customs. 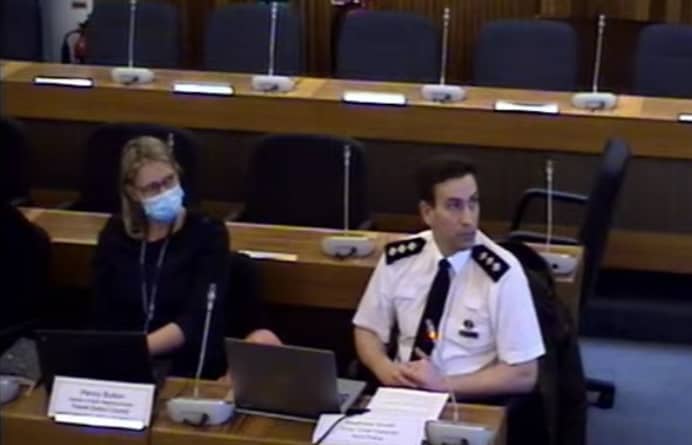 Chief Insp Smith (pictured) said: “All victims were offered safeguarding and spoken to privately through the use of interpreters where necessary.

“At that stage nobody reported being a victim of modern slavery or human trafficking. In circumstances where someone does not come forward and report they are a victim but we believe there is sufficient evidence or intelligence to say that they are, we can refer them and their cases to the National Crime Agency without their consent. We don’t necessarily take someone’s word for it because we do understand through the fear and the coercion they may not feel in a position to report that they are a victim.”

A second investigation came from enquiries by the child protection team in Thanet over concerns that a food outlet was putting young, female employees at risk of sexual and labour exploitation.

A visit was carried out in November and KFRS again found safety concerns.

Chief Insp Smith said: “Of concern, one member of staff appeared to be coached into providing answer by another male who was a manager.

“That person was spoken to privately with an interpreter and they gave an inconsistent account as to how they came to the UK and what they were doing at that premises.”

It was found the person had an immigration application in process and should not have been working at that time. They were removed from the premises and the manager is likely to receive a substantial fine.

The third case was one of forced labour concerning a member of the Traveller community in Thanet.

A member of the public reported concerns after having manual labour carried out at their property. Two men appeared to be making a third man work in a way that “was characteristic of modern slavery”.

When he was tracked down he was found to be living in rundown accommodation compared to other at the site and was isolated from the community.

The man was wanted by police over a £50,000 fraud allegation.

Chief Insp Smith said: “He was arrested, however it did give us the opportunity to remove him from that situation and speak with him as a potential victim of human trafficking and modern slavery.”

The man did not report being a victim but  police examined whether he could be both an offender and a victim. Details were shared with relevant authorities.

‘Modern slavery is not limited to big cities’

Chief Insp Smith said: ‘Tackling these offences is a priority for Kent Police and in Thanet our officers are working proactively with partner agencies to identify potential victims and pursuing those we believe are responsible for the exploitation of others.

“When victims are identified, they are offered protection and support which is shaped to their specific needs such as emergency housing or counselling. Such offences have no place in a civilised society and we are keen to do everything we can to prevent them from happening and protect those who are most at risk.

‘Victims of modern slavery and human trafficking offences are often made to work long hours for very little reward, sometimes brought to this country on the promise of a better life but forced to endure terrible living conditions and threatened with violence or deportation if they challenge those responsible.

‘I want to remind people that modern slavery is not limited to big cities. It can happen in town and villages in Thanet. It is therefore important that residents are aware of the signs of potential exploitation and report any concerns they have.’

Signs that someone might be a victim of modern slavery include:

Looking unkempt, often in the same clothing and having poor hygiene;

Appearing to be under the control and influence of others;

Having no access to or control of their passport or identity documents;

Allowing others to speak for them when addressed directly, rather than speaking for themselves;

Being collected very early/returned late at night on a regular basis;

Having inappropriate clothing for the work they are performing/lack of safety equipment;

Being isolated from the local community and their family;

Travelling only with other workers.

How to report it: