Ruth Lambert, 33, and 29-year-old Jessica Silvester preyed on patients receiving end-of-life care packages, posing as nurses to gain access to their homes to steal morphine and other painkillers.

The stolen medication had originally been prescribed to some of the targeted patients to make their final days as comfortable as possible. The pair had access to patient records through their work as paramedics with the South East Coast Ambulance Service (Secamb) and would visit the addresses where they would then steal the medication.

Lambert and Silvester worked in tandem, one researching the addresses and sending details to the other who would visit and steal. Victims were targeted in Thanet, Canterbury, Whitstable, Faversham and Herne Bay. 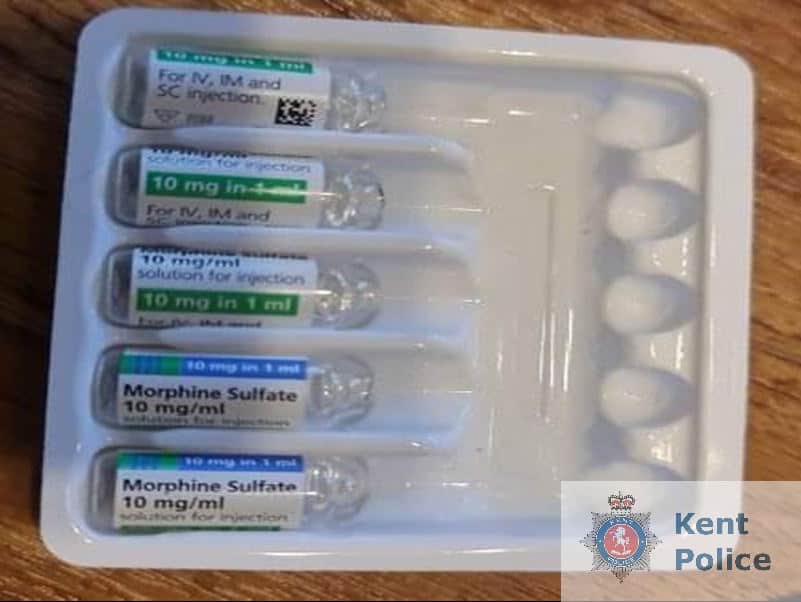 Their offending came to light in August 2021 when Kent Police began to receive a number of similar reports of distraction burglaries. The pair were arrested on 4 August at their home in Gap Road, Margate, in relation to a burglary in the town two days earlier.

Officers searched their home and found medication bearing the names of other people, as well as nurses’ uniforms and NHS computer equipment.

By analysing the defendants’ mobiles, officers from the Chief Constable’s Crime Squad confirmed the two thieves had also conspired to steal from the ambulance service with theft of medication from ambulances when on duty and from NHS reserves. Text messages between the two referred to the drugs as ‘sweets’.

An examination of the calls system during a period of just over three months of the total time they were offending, showed Silvester’s login details were used 1,847 times to access the NHS computer system and review calls.  The two women also kept a diary, logging addresses visited, the medication available and any notes of interest, such as if they were refused entry to a property.

The records accessed and the diary allowed officers to cross-reference information and identify more offences carried out by Lambert and Silvester. Many of the residents were not aware of any wrongdoing until the police arrived and made enquiries, piecing together the offences with the assistance of next of kin and victims.

CCTV and mobile phone cell data also confirmed the offenders had been at the scenes of many of the burglaries reported to police.

Targeting properties and the ambulance service

Officers established at least 25 burglaries had been carried out by Lambert and Silvester over a period of nine months from December 2020. The investigation found they stole medication from three further properties by knocking on doors and convincing occupants they were collecting the medication for legitimate reasons after their loved ones had passed away.

They also carried out multiple thefts from the ambulance service between 2018 and 2021. During their enquiries, police were able to return medical equipment to the NHS, valued at over £14,000.

The pair pleaded guilty to conspiring to burgle and conspiring to commit theft. They were each sentenced at Canterbury Crown Court today (January 11) to five years in prison.

Detective Sergeant Jay Robinson from the Chief Constable’s Crime Squad said: “When reports came in regarding suspicious individuals visiting properties looking for medication, further work was carried out to review earlier burglary reports to Kent Police to see if they were linked. This led to the scale of Lambert and Silvester’s offending becoming clear.

“These offences were an astonishing abuse of position. These two thieves, whose jobs were to care for those in need, were plotting and stealing crucial medication from terminally ill patients. Many of their victims have since passed away and will never know that justice has been done. Our investigation was carried out, knowing we had to represent those victims and do the very best for them.

“My thoughts are with the families of all those who were targeted by these thieves. We thank them for their support during what must have been an already difficult and sad time for them.”

She said: “We are shocked and saddened at the lengths to which these former members of staff went to, to commit their crimes and our thoughts are with all those affected.

“Their behaviour was a clear and targeted abuse of their position and does not reflect the commitment and integrity of our staff. As soon as we became aware of the allegations, we took swift action to suspend and then dismiss both individuals, working closely with Kent Police.”