Margate’s Theatre Royal has to be one of the best venues to watch a pantomime in the country. And this year’s offering, Robin Hood, is a show worth watching.

Not only does the Theatre Royal permanently look like it has the Christmas decorations up, but it’s big enough to hold a noisy crowd while retaining an intimacy that means you always feel close to the action. With pantomime, the last hurrah of the old musical hall variety show, that intimacy means that cast and audience are working together (except today’s unwilling volunteer Dan, four rows back, who never gets into the spirit of pantomime).

The cast and audience’s need to work together has never more needed than this year, which feels like a show put on against the odds and a real celebration after two years of lockdowns which saw the Theatre Royal go dark.

It’s clear that many in the audience are regulars, back to see regular Margate panto turn Jezo Bond make the same jokes as every year – which is not a bad thing. With his signature boombox routine it’s clear he’s a tight comedian, and his opening trick (a one man take on sawing the lady in half) shows he’s a fine magician, too. It’s his sixth year in Margate, and it’s clear he knows the theatre well, playing jokes up, down, and sideways to reach the back of the stalls and the top of the gods. This year, they’ve given him the gift of playing Silly Willy, a name which leads not so much to double entendres but to straightforward single ones.

The rest of the cast play with that name, too. 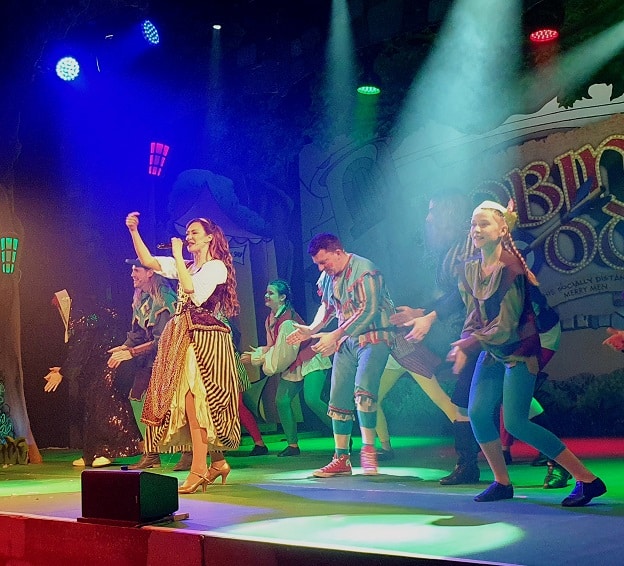 It makes all-singing, all-dancing Georgia Rowland Elliot, who trained locally at East Kent College, raise her eyebrow more than once. She is another Margate Panto regular. She plays a fairly straight Maid Marion, with just the right amount of sparkle, but gets some good gags in too. A socially-distanced duet with Robin, and in another scene her unconscious crawl off stage, prove that she can play comedy – it would be great to see her given a role that gave her more to play with.

Robin Hood is exactly as you’d expect, too – green tights, thigh slaps, and a hearty hero-ness offset by The Man They Call G’s comedy impressions. Unsurprisingly, the Prime Minister and his party culture are the subject of one memorable routine.

Mike Sengelow is this year’s Dame, and while he perhaps lacks a little of the physical presence of the best dames, he makes up for it in energy, fast-paced delivery, and the ability to camp it up whenever the name ‘Willy’ comes up.

But perhaps stealing the show is Nicholas Bendall’s archly wicked Sherriff of Nottingham. He strides about the stage, being thoroughly mean, channelling the spirit of Rick Mayall playing Flashheart in the Blackadder series. A couple of times he has a ukulele in his hands, and we get a few lines, but it would be great to see more of this. Of course it’s best not to read too much into any characterisation in panto, but Bendall has created a memorable villain.

And if he steals the show, it’s worth mentioning the junior ensemble who hold it all together as villagers, Merry Folk, and the Sherriff’s guards. This is even more true this year, where a reduced cast size means that these young volunteer performers are rarely offstage. There are three teams and some reserve dancers – today, it’s Team John with Chelsey Carpenter, Ellie Cullen, Neve King, Anna Marsh, Grace Pattenden, Grace Rabey, Grace Timewell and Eliza Thompson. Without their constant presence, the cast would have to work much harder and it would be a far flatter show.

There are, of course, some strange holes in the plot – most notably, why Silly Willy has us guarding a jerry can that never plays any part in the story. And there are some panto favourites missing. There’s no messy slosh scene, no ultraviolet dance (which when the castle has dungeons seems an obvious inclusion), and no songsheet. Perhaps worst of all, Robin and Marion do marry – apologies for the spoiler – but there are no spectacular costumes for a big wedding walkdown at the end.

All of that is, perhaps, only missed by a panto purist.

Robin Hood has everything you need, after all – good songs and great dancers, a proper hero and a fantastic villain and a beautiful princess, a great comic and a camp-as-Christmas dame. The cast race through the script, with no slow moments or surplus scenes, and it’s genuinely a laugh a minute. The sets are great (apart from some iffy projections – never as good as a proper backcloth) and the lighting design is especially magical. It’s a great pantomime in a glorious theatre. With the venue closing and no clear plan in place for its reopening, let’s hope this isn’t the theatre’s last pantomime – but if it is, Robin Hood means it’s going out in style.

Robin Hood is on every day until 2 Jan, except 20th and 25th Dec. Visit www.margate-live.com for tickets.