The next Kent Police panto at Margate’s Theatre Royal is written, produced and directed by a member who defied the odds to not only survive being hit by a car when he was a youngster but then thwarted predictions that he would never talk, walk or dance again.

Martin Douglas has created the Jack in the Beanstalk panto, which hits the stage next February, after years of involvement with the annual show but 20 years ago he suffered massive injuries in the road accident and even stopped breathing five times.

Martin, from Margate, was 15 at the time and riding along St Peters Road to dance rehearsals at Encore Enterprises studio. Alongside him were younger brothers Jamie, 13, and Adam,11.

Martin, now 34, said: “A car entered the cycle lane and knocked me off my bike. I was thrown into the air; the car had gone over me. I stopped breathing instantly.

“My brothers ran to my rescue and they both performed CPR, putting me in recovery position, calling 999 and my mum. Adam had just learnt first aid training at school as well as “DR ABC” (Danger, response, airways, breathing and circulation). He used to always practice on me when he was at home but never thought he would have to do it for real.

“I stopped breathing a number of times, but my brothers as a team managed to bring me back to life. An off-duty doctor was in the traffic jam and also came to assist. The ambulance arrived and took over.

“Altogether I had stopped breathing 5 times,3 times on the roadside and twice in ambulance. My mum was driven to the scene of the accident by a friend but was held up by traffic. She got out of the car and ran to me. By this time, she was suffering with breathing difficulties and an asthma attack. My mum was told I died but thanks to my brothers’ quick reactions and the medical team, I survived. I suffered critical spinal and skeletal injuries.”

Martin was taken to QEQM Hospital in Margate and rushed to theatre and then taken to the intensive care unit.

He had a punctured lung, his right arm was split open and he had a broken neck among other injuries.

The decision was made to blue-light the youngster to Atkinson Morley hospital in London where he had metal rods and pins inserted in his neck and remained in a coma for three weeks.

Martin said: “When I had woke I was told by my mum I was in hospital and it was my brothers who had saved my life, I was also told by doctors I shouldn’t be here, and was a very lucky boy.”

After several weeks Martin was transferred to Rainbow Ward at QEQM where he was treated by speech therapists, occupational therapists, physios, doctors, nurses and consultants.

His mum Debbie did not leave his side, sleeping in a hospital chair and making sure he was cared for when medical staff were not in attendance.

Martin said: “My physio James Sampson was amazing; I owe my life to him. He, with the help of my mum, family/friends and my determination, has got me here today.  I was told I would never walk, talk sing or dance again.

“ I was going to have a tube inserted in my neck to feed me if I didn’t speak and my mum willed me on to say something, anything to stop this, she even told me I could swear. My first word was in fact a muffled “mum” and it was enough to stop them inserting a tube.

“During the time I couldn’t speak I communicated with my mum and family through writing on paper. This was very difficult to do lying down as I could not see what I was writing but my mum knew exactly what I was trying to say every time.

“I had to start from scratch, I couldn’t eat or drink, everything was given to me by a tube in my nose which was horrible, I then moved onto baby food. My soft pallet had dropped, and a lot of air comes through my nose, I also choked a lot on liquids and food.

“Once I was able to talk I asked my physio when I was going to dance again. He said ‘you can’t even walk, let alone dance.’ I asked him the same question again. I then got up and took two very small steps with assistance. I then asked again when would I dance.”

During this time the Encore members and boss Julia visited Martin and told him  that he would be performing in Disneyland Paris with them later that year even if they had to push him on stage in his wheelchair. This gave Martin a goal and the determined lad worked hard towards it.

He was in hospital for three month but, seven months after the accident, he was on stage at Disneyland with specially choreographed sets where left side movement replaced the right due to Martin’s paralysis on that side.

The following year Martin  attended the Kent Police panto, a show he had taken part in twice before his accident. 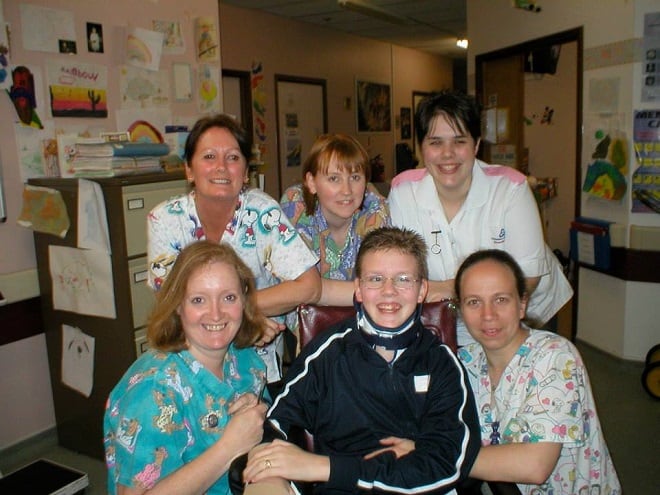 Martin said: “Before the show I made my way backstage with my mum to wish all the cast good luck. I was met by Alan Davison who told me  I wasn’t watching the show but I was in fact going to be in it!

“ I couldn’t believe what I was hearing, He took me to dressing room 1 where Wendy, our costume lady, was and asked her if she could put together something quickly for me to wear. She literally had 30 minutes till curtain up. I was given a script, cues and away I went. I was playing a lost boy.

“The police were thrilled to see me, I was greeted by them all with open arms. I felt alive again and was back where I belonged.”

Raffle money collected at that show was donated for Martin’s rehabilitation costs and went towards buying him an electric scooter to give him more independence.

Twenty years on and Martin is still a stalwart member of the panto team having taken on small and main roles and now being writer, director and producer. Martin will also appear on the stage.

He said: “It is a huge honour to be stepping into the role of director, producer and writer. These are big shoes to fill, Alan Davison is an amazing director, Ken Pickett’s writing is so creative, and I couldn’t have written my panto without the love and support from these two incredible people.”

When he isn’t working on panto Martin supports best pal Craig Harker in his campaign to raise awareness of mental health issues.

Martin has paralysis of his right side, only 20% movement in his neck and uses an electric scooter for distances but is embracing life to the full.

Martin said: “I have been given a second chance. I never gave up hope on myself and  I am proud to still be alive. I’m not a victim anymore, I’m a survivor.”

Jack and the Beanstalk  is at Theatre Royal Margate from February 17-19.