A court hearing to evict all of the families at the temporary Traveller stopping site at Ramsgate port has been adjourned for 90 days under a High Court order.

The eviction hearing was halted due to an application for a Judicial Review over Thanet council’s handling of the Pavee families at the site.

However, notice was then served on some of the Pavee families at the port which has been in use as an agreed stopping point since the end of May. Thanet council said this was due to a ‘new group’ moving onto the site without authorisation although Gypsy and Traveller Coalition representatives said they are all part of the same family and added that some notices were served two days after the death of a two-day old baby amongst the group,

An eviction hearing at Margate Magistrates’ Court on October 1 was adjourned until November 9. This was again adjourned for the bench to review points of law raised by representatives of the family on the Port until the hearing yesterday (December 8). 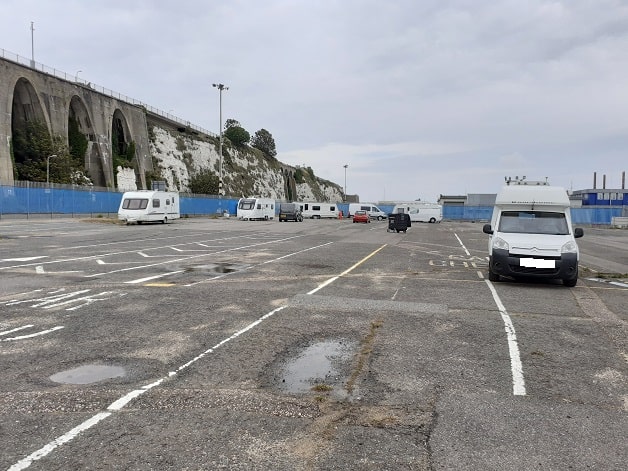 The hearing has now been adjourned to March 2 next year due to the Judicial Review application which, it is understood, has been made on the grounds of human rights breaches.

A Thanet council spokesperson said: “A court hearing for an Order of Removal relating to the encampment at the Port of Ramsgate scheduled for Wednesday 8 December has been adjourned for 90 days. This is further to an application for permission for a judicial review which was issued on Tuesday 7 December.

“The High Court made an order to postpone the proceedings in respect of the section 78 removal order. A date has been set for 2 March 2022 for the next hearing. The hearing can be adjourned further if the judicial review proceedings are not resolved by then or the stay has not yet been lifted.”

The Judicial Review has been raised following numerous concerns over facilities at the port and attempts to move on the group despite health needs. Thanet council says there is no evidence of continuing welfare needs but the Gypsy and Traveller Coalition say there are significant health needs with people suffering long covid, the effects of double pneumonia and other serious illnesses which are now being treated by an NHS team. Among the poorly members are a baby and a child.

A Coalition spokesperson said: “The High Court in London stayed Thanet District Council’s attempt to evict the people they placed on Ramsgate port.

“There is a Judicial Review in place into the situation, including the actions of the council via its officers when dealing with this ethnic minority group, especially surrounding the group’s appalling health issues, which officials collated and then ignored.

“The District Judge on December 8 at Maidstone Magistrates’ Court heeded the High Court’s stay of eviction and adjourned that court until March 2, 2022. This might again be adjourned pending the outcome of the Judicial Review by the High Court

“A Judicial Review taken against a council by a group of homeless people is unusual and another low hit by the council.”

The Coalition has questioned whether district councillors are aware of the situation.

The spokesperson added: “The council’s actions against this group are very  problematic as there seems no valid reason, bar one, for them not to deal with this homeless group as they would any other homeless group.

“There are other cases at this time being constructed with various bodies into the actions of against this group of people. Cases which will undoubtedly follow the conclusions of the judicial review.”

The spokesperson added: “Racism, discrimination, prejudice and bigotry should be challenged at all times.”

County Councillor Karen Constantine, who is among the group of Thanet councillors and others who have been supporting the Pavee group, said the families now have to fight on two fronts as eviction comes under criminal law and the JR under civil law.

She added: “TDC haven’t taken any steps at all to adhere to the their Public Sector Equality Duty to foster ‘good relations in the community’. This is a huge failure and missed opportunity. TDC have a duty to deal with hate crime. A small minority in our community are racist towards the Travellers. TDC need to show leadership.

“TDC haven’t provided any training for their own staff. Members of the TDC welfare team confirmed this to me when I asked them what training they had received.  This now needs to be provided promptly.

“TDC staff need professional support in the dealing effectively and appropriately with Pavee culture. It simply isn’t useful to make assumptions, nor is it helpful or necessary to always turn up as a large group accompanied by 5/6 police officers or more.

“We have been raising the inappropriateness of this for some while. This certainly wouldn’t routinely happen in the settled community. It creates tension and mistrust. The casual observer may well wonder why the police visit the site so frequently and drew an inaccurate conclusion. This practice is unnecessary and needs to be re-evaluated. We are seeking a meeting with Thanet DCI Matthew Smith to discuss alternative and culturally appropriate ways of policing the site and joint working. This includes making sure the Travellers issues are also heard and addressed.”

Inspector Ian Swallow of Thanet’s Community Safety Unit said: “Kent Police was made aware of a traveller encampment near the Port of Ramsgate in June 2021 and has since been assisting the landowner Thanet District Council with their response.

“Police officers sometimes accompany representatives of the council to the site to support our partner agency in its work. The visits also give officers an opportunity to engage with those living at the site and hear any concerns they may have.”

Cllr Constantine says she has asked the county council’s health committee and public health to conduct an audit of needs for the past 6 months and understands KCC will conduct a short focused enquiry.

The group is also being supported by district councillors Becky Wing, Tricia Austin, Mike Garner and Raushan Ara and Ramsgate Town Council’s Anne-Marie Nixey as well as Father McNally who looks after the community.