Faye Beerling’s was commissioned by Candida Adkins, daughter of Jackie Moggridge, to write about her mother’s amazing career in flight.

The book Spitfire Girl – which shares its title with Jackie’s own autobiography – chronicles her career from overcoming air sickness to becoming the first female Captain and how her love of flying propelled her through prejudice and adversity to achieve her dreams.

Faye’s credits include making history with the Ministry of Defence and being the first author on record to write for children about pilot Amy Johnson.

Candy and Faye first met in 2016 at the launch of the life-size Amy Johnson bronze statue. The statue was unveiled by HM Prince Michael of Kent, and it was at the ceremony that the two became friends.

More recently they spoke about the possibility of a book to inspire girls to consider a career in aviation. 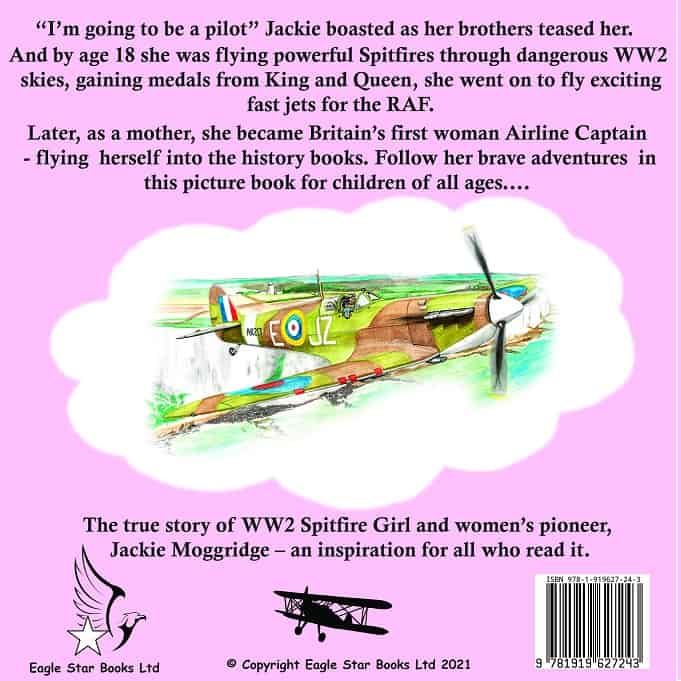 Candy said: “My sister Veronica and I hope that our mother’s adventure in these beautiful snap shots of her life will inspire more girls to fly.  Watch her life unfold from parachute jump to King’s commendation, Spitfires to passenger jets, seeing World War Two from a woman’s perspective. Faye has made it possible to share this inspirational story, for our mother always believed anyone can achieve anything with hard work and determination.”

Faye said, “It was another dream come true for me. To write about this amazing woman was not only an honour but necessary. Not only did she break down barriers, but she also set records, served her King (and Queen) and country and to this date is still recognized for her achievements.

Faye, 52 published her first book -Nautical Chaos-in 2014 and has since had phenomenal success, selling to NASA, receiving letters of thanks from former Australian Prime Minster, Martin Turnball and Her Majesty Queen Elizabeth II and scooping official endorsement from the Ministry Of Defence for two years in a row.

The book launches tomorrow (November 8)  and will be available to buy from all good book shops and online.

Find out more about Faye and her books at https://www.misspotterltd.com/

Who was Jackie Moggridge?

She learned to fly and got her ‘A’ flying licence, starting to fly aged fifteen. She became the first woman to do a parachute jump in South Africa aged seventeen. She moved to the United Kingdom in 1938 with the intention of getting her ‘B’ flying licence with the Aeronautical College, Witney, Oxford.

During the war, she joined the Women’s Auxiliary Air Force until she could join the Air Transport Auxiliary (ATA). Initially she was based in Rye at a radar station. She was recruited to the ATA by the Women’s Commandant, Pauline Gower in July 1940. Moggridge was the youngest of the female pilots at the time. She flew more than 1,500 aircraft of 83 different types.

She left flying when the ATA disbanded. She married an army Lieut. Colonel and engineer, Reginald Moggridge, in 1945 and they had two daughters.

In 1949 she was commissioned into the Women’s RAF Volunteer Reserve (WRAFVR), as a Pilot Officer, and qualified for her RAF wings in 1953. Moggridge went on to gain her commercial pilot’s licence in the 1950s, and ferried Spitfires from Cyprus to Rangoon, to the Indian Air Force and to Burma, before looking for more flying opportunities. In 1957 she worked for LEC Refrigeration, co-piloting demonstration versions of their fridges to South Africa for potential customers to view, a trip of 15,000 miles. Next she applied to be a pilot with Channel Airways based at Southend Airport. She got an interview and managed, using her impressive flying record, to get the job. Over time, she worked the Isle of Wight, Jersey and Guernsey routes.