A large gathering braved the grey clouds overhead to turn out to a rally at Ramsgate’s Western Undercliff beach today (October 30) to voice their protest at Southern Water sewer outfalls and pumping station discharges into our coast.

Around 300 people took part in the event which included music, creative banners and a series of speakers before a march along the coast to Ramsgate seafront where the Big Draw Festival is being held.

Among those to address the crowd was County Councillor Karen Constantine who called for water companies to be nationalised and highlighted the £57million of profits made by shareholders while residents “swim through poop in our seas.” 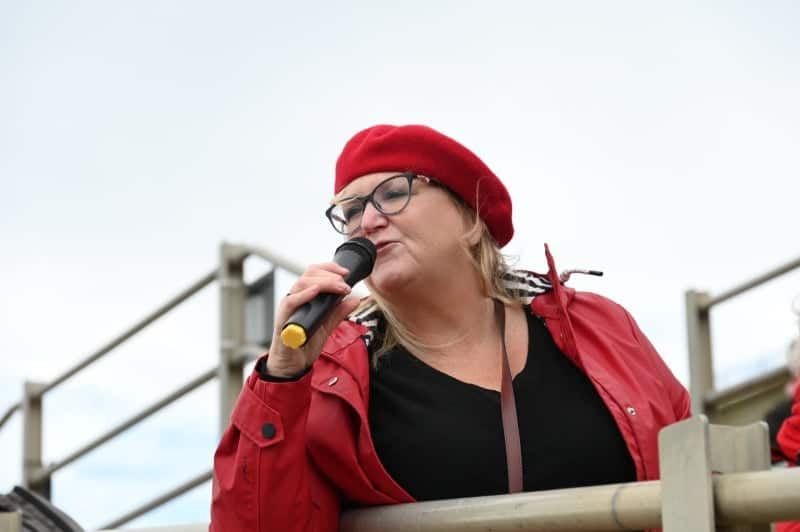 South Thanet MP Craig Mackinlay also attended and said demonstrations were a powerful way to force change. Referring to his rebellion against government over voting down parts of an amendment in the Environment Bill that aimed to place legal duties on the companies to reduce discharges he said water companies had to “get their house in order.”

Government has now U-turned, announcing this week that the Environment Bill “will be further strengthened with an amendment that will see a duty enshrined in law to ensure water companies secure a progressive reduction in the adverse impacts of discharges from storm overflows.”

Cllr Yates revealed a Freedom of Information response from Southern Water showed that Margate Wastewater pumping station has failed to meet the legally permitted pumping speeds on 5 days – a total of 23 occasions – over the past three years during periods of heavy rain.

During heavy rain it is required that the pumping station pumps wastewater at a minimum of 809 litres per second to Weatherlees water centre for treatment, this is required before Southern Water are allowed to discharge wastewater into the sea under their permit. A failure to meet these speeds can result in additional sewage being dumped into the sea in periods of heavy rain.

The permit for Margate WPS states the requirement of 809 l/s is only applicable for discharges from the long sea outfall in storm conditions. There is a margin of error which can be applied to this figure making the minimum pass rate 774. 28 l/s.

Speaking prior to the rally, Cllr Yates said: “This is strong evidence that Southern Water have been failing to maintain the key Thanet pumping station and may have breached their permit to operate, which has resulted in additional sewage being dumped into our coastal waters.

“The most recent breach of pumping speeds came this month, on October 5, so I would like to know why Southern Water is still not able to meet their permitted pumping speeds that it signed up to in 2005. Why is it so difficult to ensure these pumps are working when the company signed up to an agreement that required it to do just that? 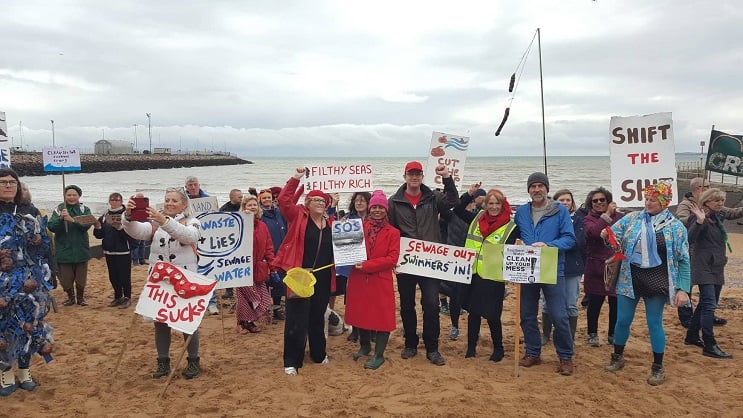 “From my reading of the permit Southern Water is only allowed to fail to meet these pumping speeds under two conditions, the first is that they suffer an “electrical power failure” and the other is if an “unavoidable mechanical or electrical breakdown” has occurred. Seeing as we have only heard about one electrical power failure recently, are we to believe that it is good operational practice for a pumping station to have four unavoidable breakdowns over a 3 year period, bearing in mind these incidents only occur during periods of heavy rain which are very infrequent.

“Private water companies have paid their shareholders £60bn since they were privatised, it is time for a serious conversation about bringing water back into public ownership, investing in our own infrastructure and stopping the dumping of raw sewage along our coastline.”

A Southern Water spokesperson said: “Unfortunately there are occasions when our releases are unconsented. We know this is unacceptable to our customers and it is unacceptable to us which is why we are investing £2 billion in our network to 2025.

“We have pledged this week, in response to the Environment Bill amendment, that we are ready to plan and deliver an 80 per cent reduction in storm releases by 2030. A task force to prioritise this work has been set up this week. 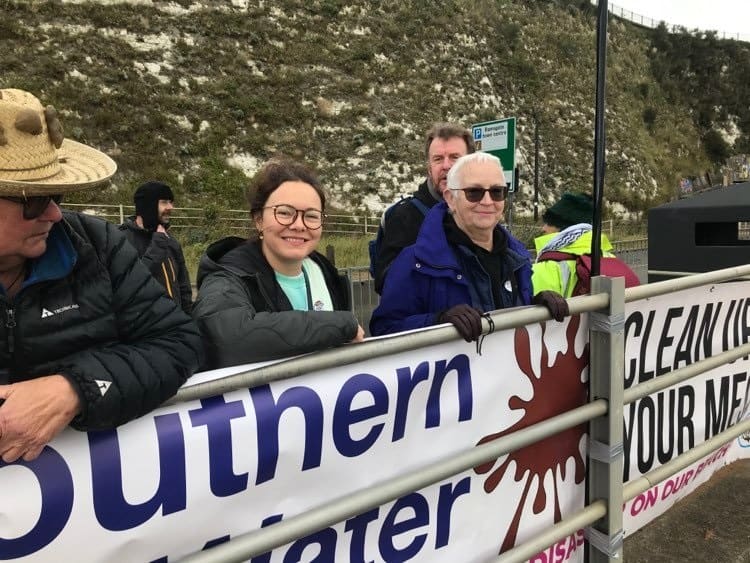 “Separating surface water from the sewer network is the most cost effective and environmentally beneficial way to address this issue. We want to work with all our partners to deliver solutions.

“We are the most open and transparent water company for our releases. Margate Wastewater Pumping Station is now staffed 24 hours during times of forecasted rainfall.

“We would be happy to meet with those protesting today and discuss in detail our plans, investment and delivery. We met with Thanet District Council earlier this week as part of our ongoing work to address the concerns in the area. 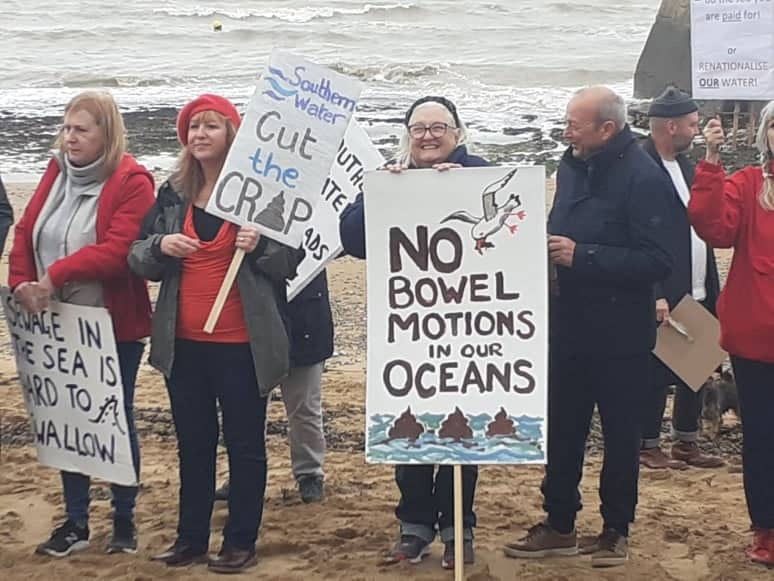 “We are also spending £400k on a ground breaking network survey in the area to understand all the pathways for surface water into the sewer network in the area.”

During the protest rally there were also songs, including Johnny Cash’s Don’t Go Near The Water, and repeated calls to renationalise water companies.

Cllr Austin said people were being hit with “hosepipe bans in the summer and swimming through sh*t in the winter.”

She asked people to write to Southern Water voicing their protests, to report all blocked drains to the county council and to monitor their own water use.

The Southern Water spokesperson said the company is listening to what protesters are saying and is working to reduce the use of storm releases.

They added: “ The most efficient, cost effective and environmentally beneficial way of reducing storm releases and the carbon footprint they create is to separate surface water drainage from the sewer system.

“Reducing the amount of rainwater run-off from roads by around 40 per cent would mean an 80 per cent reduction in storm water releases. It will also continue to protect homes, businesses and other properties from flooding, which is vital role storm releases currently provide.

“We have welcomed the Government’s amendment to the Environment Bill, currently going through Parliament, to include a duty on water companies to deliver a reduction in discharges from storm overflows. This development is in line with our commitment to dramatically reduce pollution incidents and the use of storm overflows.

“It is important to remember that all 83 of our bathing waters meet strict European standards, a challenge which 20 years ago seemed impossible, but we have delivered. Our bathing waters are now the cleanest since Environment Agency (EA) testing records began.

“We are spending £2 billion on our infrastructure and the environment, to serve our customers, the environment and boost local economies around our 700 miles of coastline.”

Southern Water says storm releases during intense periods of rainfall are not raw sewage but usually more than 95 per cent rainwater.

The spokesperson added: “We invite those involved with the protest to meet with us to hear about our work, our investment and our commitment to improve service to our customers and discuss ways to work together to achieve a goal we share, to protect the environment.”

Cllr Constantine said she has been attempting to arrange a public meeting with Southern Water since October 8 and said SOS Ramsgate is requesting attendance of a senior water company figure, full details on how and when Southern Water will invest in Thanet water and sewerage infrastructure; a direct meeting with CEO Ian McAulay and for Southern Water to pay for independent regular water testing in Ramsgate.