An amazing 3,500 lights have been used to create an automated Halloween show with music on a St Nicholas-at-Wade home.

The display at 18 Sandalwood Drive has been created by David Smith who is an IT manager for a global manufacturer of recycled packaging.

David, who has tinkered with electronics since childhood, and wife Becky are using the display to raise money for ‘Ishani’s Forever Home’ via the charity ‘Sullivan’s Heroes’.

Ishani  is a severely disabled little girl who is defying medical predictions and her parents are appealing for help after the cost of creating a fully adapted home increased by a whopping £70,000 on the original estimate.

She has hypoplasia of the cerebellum – a developmental condition in which the cerebellum of the brain fails to develop properly – and cannot communicate verbally. Ishani also has hyper-kinetic movement disorder which results in uncontrolled and  involuntary movements.

Parents Sarah and Jay, who were both research scientists at Pfizer, say their aim is to adapt the Margate bungalow they bought in 2019 so that Ishani will have the ability for semi-independent living with a series of rooms, connected by hoists, to allow her to move freely between them.

She will have a bedroom, wet-room  and a play/therapy room to allow her the space she needs to grow, develop and carry out her daily therapies. The family are also planning to make their living space open plan, with level access into the garden, so Ishani can easily join her parents and little sister, one-year-old Liana, in day to day activities. 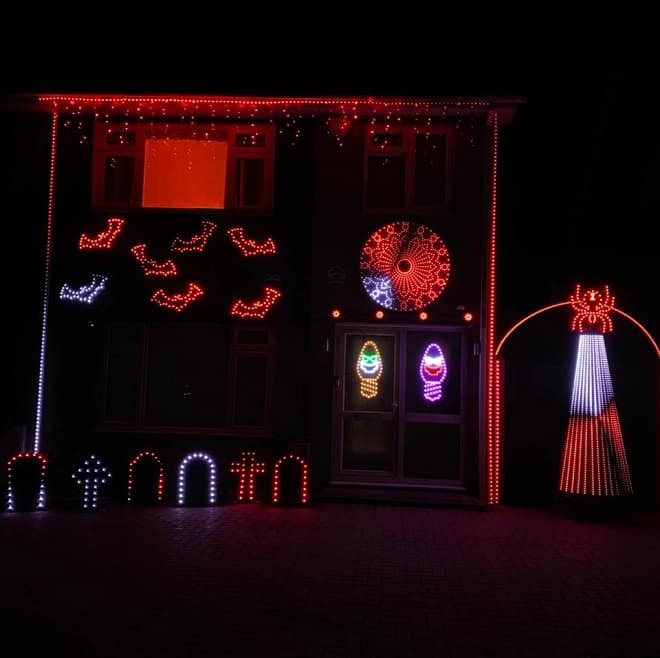 The Halloween light display, which features animations as well as a song playlist, is David and Becky’s way of helping to raise funds.

The cause was chosen because in 2013 the couple’s son Andrew, was born 9 weeks early weighing only 2lb 9oz. He was in NICU (neonatal intensive care unit) for 4 weeks and SCBU (Special Care Baby Unit) for another 4 weeks.

Donations from the display raised £735 for the charity.

Becky said: “This year, we’re raising money for “Ishani’s Forever Home” via “Sullivan’s Heroes” who provide grants, support and fundraising to adapt the homes of disabled children in the UK.

“Ishani was our son’s incubator neighbour when they were born prematurely just over 8 years ago. Her parents purchased a bungalow in 2019 with the intention of extending it to build a safe and accessible home, so Ishani could continue to live with her family into adulthood.

“COVID, Brexit and soaring costs in the construction industry have all contributed to 50% increases in costs for the build compared to the original quotes, so now the family are having to fundraise to make up the shortfall.

“My husband has been working in the garage over the last few months building the props and sequencing the lights on his computer. This year we have about 3500 lights on the house.”

Each show lasts just over 20 minutes so wrap up warm! Becky, David and their children live in a small cul-de-sac so if you’re driving please park considerately for the neighbours.

The couple also promise a fantastic Christmas display is on the way!

Find the fundraiser for Ishani here