Ramsgate Arts Barge will be hosting an art event on Saturday (October 30) as part of the world-wide Big Draw Festival.

The Ramsgate event will take place on Ramsgate Main Sands, by the East Pier wall, from 2pm to 4pm.

‘The Big Draw Festival’ is the world’s biggest drawing festival and has encouraged some four million people back to the drawing board since 2000. It has notched up two world records – for the longest drawing in the world (one kilometre) and the greatest number of people drawing simultaneously (over 7,000).

The first ‘Big Draw Festival’ was held in 2000 and attracted 180 partner organisations. Since then, the number has risen to more than 1,000, with over 500,000 people participating each year.

Ramsgate Arts Barge CIC, headed up by directors and town residents Kevin O’Connor and Natasha De Samarkandi, says the town’s event will focus on participants drawing their message with chalk along the Ramsgate Main Sands East Pier Wall, and sharing how they would like to #MakeTheChange in our seas for a cleaner and safer world. 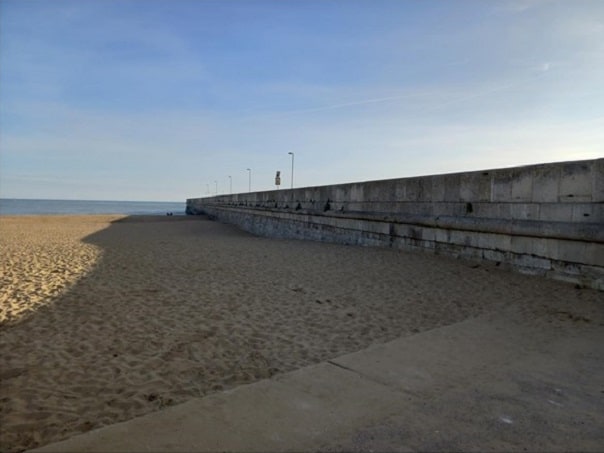 The event will come on the heels of a demonstration against Southern Water pumping station discharges and combined sewer outfalls. That demo, organised by Ramsgate swimmers and residents, takes place at the Western Undercliff from noon-1pm the same day.

Planning permission has just been granted by Thanet council for the 130-year-old barge to have a permanent mooring in Ramsgate Royal Harbour, with the vessel to be used for mixed use including exhibition, event, performance and community space, artist studios, bar and kitchen and a top deck garden seated area.

There will also be a private gangway which will attach from the harbour wall to the top deck of the Ramsgate Arts Barge for entry/exit.

The plan is for the exterior of the hull to be painted in a ‘Dazzle Camouflage’ pattern to make the boat hard to distinguish. The current proposal  is for a black and  white version but other coloured  patterns could be used.

Directors Kevin and Natasha say they will be working with the EKC Group to provide learning opportunities throughout the project and creating valuable ‘hands on’ work experience for students.

They say it will also provide complimentary community studio hire to schools, colleges, charities and not-for-profit organisations within Thanet.

Ten full-time jobs, and a number of part-time posts, are also promised.

The Vriedschap – meaning friendship in Dutch – is a 50-metre, 200-tonne, former cargo barge which spent 80 years working the waterways across Holland by three generations of the Van der Veen family, before arriving in the UK in the early 1990s to be used residentially.

It was denied mooring in Barking, where the plan was to convert her into a community centre, and faced the possibility of being scrapped by the Port of London Authority (PLA).

The vessel then made its journey to Ramsgate.