The afternoon had opened with a series of special events, as part of the Colin Brown memorial day. These included  the official opening, by Colin’s widow Lesley, of the wonderfully refurbished senior changing room that will now bear his name.

The side that emerged from it  had a slightly unfamiliar make-up, due mainly to the continuing high injury count. Charlie Knight was ruled out with shoulder problems, Marius Thompson was with the Norway national side and captain Sam Taylor was still injured. Harry Carter has been playing well for the 2s and made his debut at outside centre with James Robinson also stepping up to play at full-back.

In front of a large crowd, the visitors started strongly after the  kick-off was dropped giving  them good field position. Park were quick to build on it and their forwards  powered over in the corner for an unconverted try, after just three minutes. A missed  touch from a penalty again put the visitors on  the front foot but Wanderers defence, with a clattering tackle from No 8 James Hamilton, stood firm. A promising attack from Thanet was repulsed by Park at the cost of a yellow card but Thanet could not  benefit from  their extra man. Park edged further ahead on 25 minutes with a well struck penalty to lead 8-0.  Harrison Leach broke well and chipped ahead to mount a spirited attack that ended with a penalty to the visitors at the subsequent breakdown and there was no further score before the break.

Park had the advantage of the slope for the second half and the home defence was breached, by strong pressure, after six minutes of the half. The conversion gave them a 15-0 lead but Wanderers pack soon responded and after an extended spell camped near their opponents’ goal-line, Captain for the day, Neil Wakefield was the scorer of the forwards’ try. Tom Walton, who was kicking, landed the conversion to make it 15-7 to Park. Wanderers’ tails were up and a penalty attempt from Walton was just wide before he nailed another three minutes later from near the half-way line to make it 15-10 to the visitors. 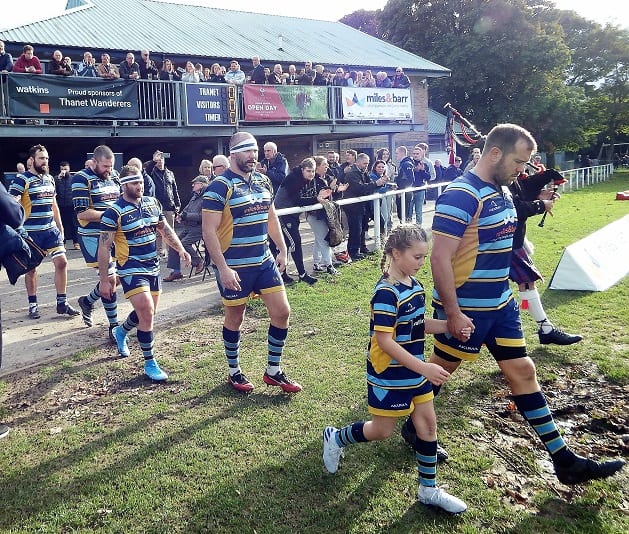 Park hit back strongly but an effective defensive lineout cleared the danger. Cam Pond became another victim of the spate of blood injuries sustained this season and had to withdraw. Play was  more open  and as the final ten minutes were played out there were chances for both sides and a big tackle from Robinson halted a near certain try from Park’s speedy number 11. Finally, referee, Gareth Edward’s, whistle sounded time on another close contest between these two old rivals with another instalment due at Kidbrook in January. Good luck to them for an injury free and enjoyable season.

Wanderers coaches will rue missed opportunities, particularly in the first half, but will take heart from the spirit of the side which has had a tough opening to the season. Head Coach , Mike Pond, is frustrated to have lost to the first and second placed sides by just five points but is confident that circumstanes will improve as the currently injured players return to fitness.  The Man of the match was back row forward, Warren Riddell-Broomfield who must have covered every blade of grass in an inspirational performance.

Next week Wanderers are away to Folkestone who are at present in eleventh place in the twelve team league. Wanderers are eighth so a close game is in prospect. All support is welcome.