The beach at Walpole Bay has inspired a fitness trainer to build a new social enterprise with plans to employ young people and offer affordable facilities.

Clint-Sanyika Odiete has shared plans to put a 40ft container housing an outdoor gym and juice bar at the site near the Grade II listed cliff lift.

As well as running his Beach Fit business the boxing guru wants to offer PE classes to children and encourage youngsters of all backgrounds to mix together.

He said: “I want to employ young people and put them through their NVQ so they have something to aspire to and a career path.”

Growing up in Lewisham the 42-year-old knows firsthand how important community centres are in supporting working class families and since making the move to the coast his vision for an accessible space promoting wellbeing and environmental awareness has grown.

He said: “I moved to Margate last July during the first lockdown – at the time I thought it was the stupidest idea. It was really scary as I didn’t know anyone.”

Like many others new to the town, Sanyika had grown increasingly tired of city life. “I was spiritually, mentally and financially spent – working so much and the end result so small. I just wanted to get out of the rat race,” he said. 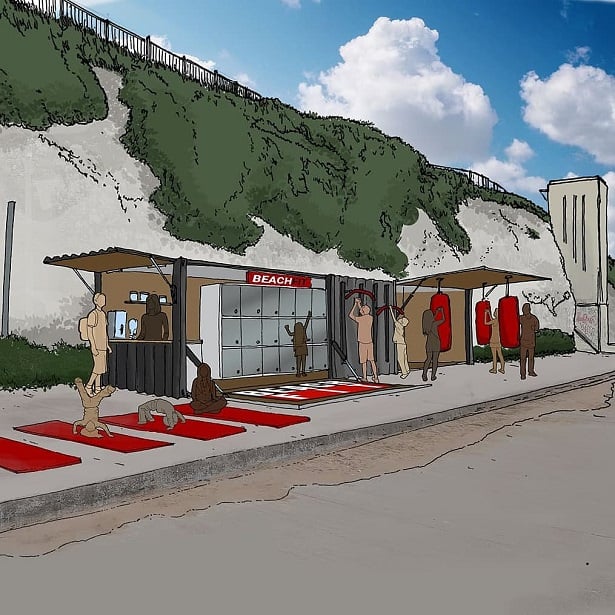 After securing a flat in Cliftonville the nutritionist gradually moved lock, stock and barrel from London – the old school way. “I don’t have a car so I did it the old way with bags and cases on the National Express and the train over a few weeks. The people at the cafe began to recognise me with my bags clanking around and asked where I was moving to. When I said Athelstan Road their faces said it all.”

The multicultural street is one of the most deprived in the area but residents have witnessed improvements over the years and celebrate the diverse demographic which includes the Roma community.  “I love living here and am definitely a face on the street – there is a real mix of people. The kids started calling me Anthony Joshua and follow me on my runs, a bit like Rocky!”

He added: “I was on the phone to my sister and she said I was the black Joe Wicks. I was putting flyers all over the place, at Westwood Cross and on the Loop bus.”

Still, he had moments of doubt until he had a  ‘build it and they will come’ moment while decorating his flat.

He said: “I started training on the beach every morning at 6am.People started coming up to me and asking me to train them. I would say around 70% of my clients are women and the mums are fierce!”

Gradually he built up a clientele and now has a waiting list eager to get fit by the beach.

Sanyika regularly cleans the beach and maintains the Haeckels sea bathing machine. In exchange he stores equipment and incorporates it in some of his workouts with clients.

The container proposal, which he also hopes to run podcasts from, requires the green light from the council who are looking at various proposals submitted under the Margate Town Deal.

Other plans would see toilets and shower facilities for swimmers using the Walpole Bay tidal pool.