A primary school caretaker from Margate has completed a virtual London Marathon to raise money for two causes focused on mental health help for young people and an organisation helping Thanet families who are struggling below the poverty line.

Doug Knight was inspired to enter his first marathon after downloading the Couch to 5k app during lockdown last year.

Doug, 52, said: “I couldn’t even run up the street without getting puffed out and went to the doctors thinking maybe I had asthma. But the doctor said there was noting wrong with me  which was a shock.

“So, I started the Couch to 5k during the lockdown, about 18 months ago, and after I completed that my daughter suggested we enter  the London Marathon.”

Although Doug did not gain a place in the physical marathon, held last Sunday, he was given the opportunity to run it ‘virtually’ on the same day by completing the route along the coastal path from Palm Bay to Herne Bay and back again. He completed the 26 mile route in 4 hours and 36 minutes.

Both causes are very personal to Doug with his daughter having suffered poor mental health since the age of 14 and wife Sonia setting up the community kindness charity to help local families. 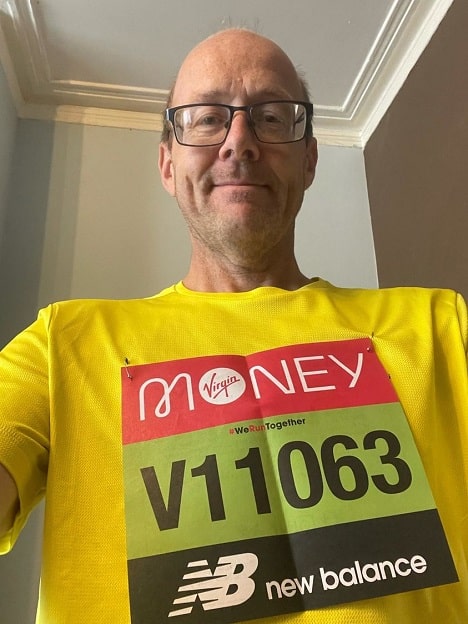 He said: “My daughter has gone through a lot. She was going to run the virtual marathon with me but did not in the end.

“She suffers anorexia, depression and emotional instability disorder. In a way it was a relief that she didn’t run as the anorexia had made her obsessed with sport.

“Choosing Young Minds was because of my daughter’s struggles.”

The couple’s daughter, who is now 22, began to struggle at the age of 14 and self-harmed.

She had a talented sport background representing GB in at several events.

Sonia said: “She has been working hard to help herself and others. She moved away from her old life which means we have limited contact and that’s hard but that’s what she needed.

“For a long period of time my first thought on waking up would be whether she was still alive. The way she lives her life now means it is more of a second or third thought.”

The second cause, Community Kindness Thanet, was set up by Sonia in November last year and was initially to help vulnerable families and individuals with gifts at Christmas.

But the scheme has now expanded to help with gifts throughout the year, from birthdays to easter and more.

Sonia has a background in supporting vulnerable people but the pressure of the job combined with the fears for her daughter led to a breakdown three years ago.

Sonia made the choice to step away from that role but says the passion for helping others remained.

She said: “Since the breakdown I have not done the same capacity of work but it does not change the passion I have for wanting to support people, especially in Thanet which has huge levels of deprivation.

“I changed my job during lockdown and that gave me more time at home and more time to think about how I could help our community.”

The Christmas gift scheme was done through fundraising and then linking up with organisations such as early years and schools to make sure the right people were reached through referral.

Sonia, 44, said: “It was a great success with 270 people receiving Christmas gifts. It made me realise I wanted to do something more than just Christmas gifts and so Community Kindness Thanet was launched. The aim is for gifts, such as for birthdays, to go to individuals suffering hardship. People are referred through a variety of organisations and that makes sure we are reaching the right people and giving support all year around.”

Donations of new toys and gifts can be made, with sensory toys especially welcome.

This Sunday (October 10) is World Mental Health Day. The theme this year is mental health in an unequal world. On Friday (October 8) Young Minds is urging everyone to donate £2 to the charity and wear yellow.

The #HelloYellow fundraiser helps Young Minds with its work and raises awareness of young people and looking after mental health.