An installation of four galvanised steel tripods with spinning discs at the top  at the East Cliff bandstand in Ramsgate will be ‘opened’ on September 30.

For the temporary installation, which will be in place for up to one year, the four structures will have a perforated steel disc on top of a steel pole and will be weighted by a tripod base. The installation has been titled as Beacons.

Each structure will be hand operated by a handle which will allow each disc to be gently rotated when turned. The handle can be removed (by Turner Contemporary) when access to the artwork might be required to be restricted.

The children involved in the project have researched Ramsgate, with a focus on the historic character of its Royal Harbour, and this was used for their ideas for the artwork.

The themes are drawn from nautical signalling and ideas about Ramsgate and its Royal Harbour as a place of refuge as well as Play and Playfulness- noting Ramsgate’s legacy as a tourist destination; Caring – noting how to deal with environmental issues, pollution of the harbour, sea, air and litter in the town and Modern Machines – in a nod to Georgian civil engineering, such as Ramsgate’s sluices, bollards, basin gates and John Smeaton’s dry dock.

Additional information on the artwork will be displayed on temporary, removable vinyl graphics installed in the bandstand.

The creation will have a concealed word hidden within the design, based on a coded alphabet devised by the children. The word HOME was chosen by the children to  be the message that the beacons send out to sea. This follows the children’s work exploring Ramsgate’s maritime heritage and the history of its famous Royal Harbour – the only designated Royal Harbour in the UK, which will celebrate its 200th anniversary this September. HOME represents what Ramsgate meant to the children and also provided a message of welcome and warmth to anyone arriving in the town by sea or land.

The materials used reference those that can be found in the surrounding area of the Royal Harbour such as the steel used in shipbuilding.

The bandstand is a Grade II listed asset, and a designated public open space, within the Ramsgate Conservation Area. The structure dates to the late 1930s and includes the patterned dancefloor, the boundary wall, railings and steps, as well as the bandstand itself.

Beacons is believed to be the largest scale artwork to have been commissioned by children.

Conrad Shawcross said: “It was so rewarding to work with the children of Ramsgate on this unique child-led initiative, the project has been an odyssey in itself and I cannot wait for both the children and the town to finally see these pieces up!

“We set ourselves the challenge of trying to make the most visually arresting coded system – adopting navigational languages of the past namely semaphore and exploring moray patterns and how they work. The children and I embraced scale, colour and movement to create a series of mechanical devices that send a message of hope and welcome as far as possible out into the sea.” 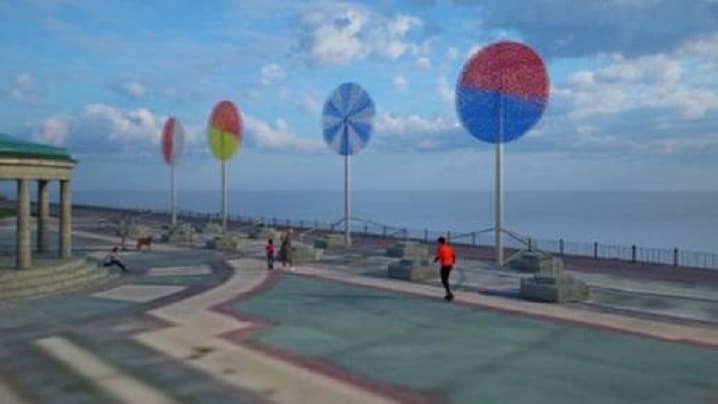 Conrad has completed a number of major public commissions across the world and is a member of the Royal Academy of Arts. In 2011 he was one of the first artists to be shown at Turner Contemporary as part of its inaugural exhibition.

As well as working with Shawcross, the children have also collaborated with Turner Prize winning collective Assemble who were commissioned to create a toolkit which aims to inform planners, decision makers and those in the education and creative sectors about how children can positively contribute to place making.

Cllr Ash Ashbee, Leader of Thanet District Council, said: “We are delighted to have been able to help facilitate this project. It’s wonderful to see how the collaboration between local children and a renowned artist has led to such an exciting new artwork. Ramsgate is home to a diverse and creative community, as well as being rich in history and we look forward to seeing the work installed in the town just as the Royal Harbour celebrates its bicentenary.”

However, the installation – and the timing of digging works for its installation – have caused concern. The Ramsgate 200 festival takes place at the harbour this weekend (September 24-26) and residents have voiced consternation that there are diggers on the bandstand site.

There is also concern that the installation will not withstand the seafront winds with Green councillor Becky Wing saying: “How are these structures going to survive our winter storms and how are they going to stop people climbing them? This is an incident just waiting to happen.

“I am all for art installations but this is on the top of a cliff that is highly exposed and with footings that do not appears to be that deep.”

Images previously released for how the installation would look appear to show the tripods as freestanding rather than dug in.