Open studios, new exhibitions, and some high-profile commissions are reminding people of the quality of Ramsgate’s contemporary artists.

While today Margate is seen as the natural home for artists in Thanet, that’s a relatively recent thing. Historically, Turner was associated with both Margate and Ramsgate: he depicted Ramsgate, not Margate, in his Ports of England series. Van Gogh lived in Ramsgate, while Walter Sickert lived in St Peters.  LS Lowry holidayed in Westgate-on-Sea, and the Pre-Raphaelite painter Dante Gabriel Rossetti spent his dying days in Birchington.

Today, artists in Ramsgate can be found at Hold Creative Spaces at the Paragon Works, at Spacer on the St Lawrence Industrial Estate, or at Arco Barco and other spaces around the Royal Harbour and the town.

Spacer is a well-established studio, where artists can work individually but also come together to work as a collective on other projects. The studio, founded in 2005 by Sarah Craske and Stephen Melton, announced plans to expand in 2019. They are also working with artist group super/collider on a project about climate breakdown, and a large commission for the Battle of Britain Museum at Hawkinge.

Hold Creative Spaces opened their studios in April this year. Since then, the space has been used to hold art sales and for workshops, as well as providing space for a number of artists to work. Hold’s artists will show their work again during East Kent Artists’ Open Houses from 9th-24th October.

Some of Hold’s artists have also exhibited at Laurent Delaye Gallery in Addington Street. The gallery represents more than a dozen artists, many based in Ramsgate. Hold Creative Spaces and Laurent Delaye Gallery recently teamed up with artist Russell Chater and Margo McDaid for a late night opening across four spaces, focusing attention on Addington Street’s place at the heart of Ramsgate’s Creative Quarter.

As many artists – like other self-employed people – prefer to work from home, the event raised the profile of an easily-overlooked sector of the local economy.

Emily Peasgood is a sound artist who works from a studio near the Royal Harbour. She has just made Isle of Sound, which can be heard at all seven of Thanet’s railway stations, and a sound installation for the Powell-Cotton Museum, exhibited as part of an international project called Interbeing. That work gives the voices of the women associated with the Powell-Cotton Museum a chance to be heard.

Meanwhile, artist Christopher Tipping has been working in his home studio on a mural 50 metres long and six metres high for Coventry’s City of Culture 2021. He has created a layered vinyl design for the huge windows at the city’s Grade II Listed 1960s station, ensuring that for many visitors, his work will be the first thing they see when they arrive and the last thing when they leave. “I work from home – a studio at the top of the house.” he says, “but also on the train, in the garden, and on the beach. I’m happy in lots of places.’”

Towards the town can be found home-grown artist Molly Pickle who opened her studio/shop in July. The self-taught illustrator and printmaker started selling her work around six years ago in one of the harbour arches on Military Road that was being used at a photography studio. She then branched out to markets, pop-ups and solo exhibitions, including at the Italianate Glasshouse in George VI Park.

The work is  environmentally friendly with all  inks being vegan/ water based eco-friendly, cards made of recycled paper and cotton being100% organic and sustainably sourced.

With the new base in Queen Street she is also giving a helping hand to other artisans with a series of pop up events. 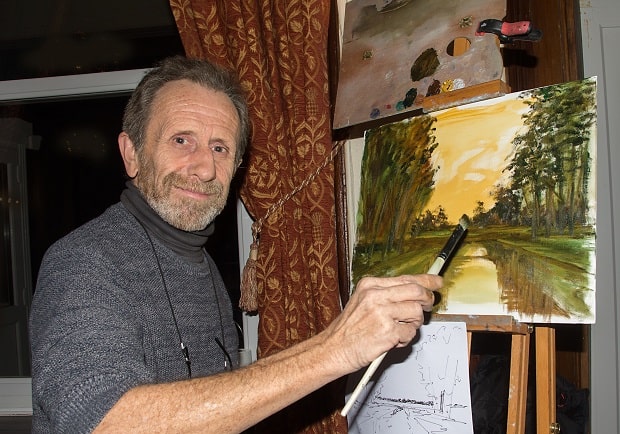 Born and educated in Ramsgate, and now firmly ensconced at its artistic heart, his first effort at painting was at Newington primary school, where he won first prize in an art competition.

When he returned to the school to enrol his own children 20 years later, after a long spell in the army, a teacher asked how his painting was going. He hadn’t picked up a paintbrush for decades, but the headmaster ran an art club and insisted he join. Mike began a new career in consequence, and almost a decade ago, when he opened the York Street Gallery, the whole of Ramsgate began to benefit from that teacher’s commitment.

All of this new work builds on solid foundations. A Summer Squall ran from 2010 to 2015, before becoming Ramsgate Festival and more recently, Ramsgate Festival of Sound. The Updown Gallery opened in Elms Avenue in 2012, before a change of use planning application in 2016 saw the building become a home. And Ramsgate Arts founder Suzy Humphries Nice Things gallery has provided an outlet for local artists and makers since 2010.

Those solid foundations, new spaces like Spacer’s studios and Hold Creative, and those high-profile commissions mean that right now, Ramsgate looks like a good place for artists to live and work.

Last year a report said Ramsgate was helping to contribute in excess of £165million to the UK economy through creative individuals and enterprises.

The analysis of the economic impact of Ramsgate’s creative sector said the town’s cultural renaissance was having a huge impact not only on the local economy but also on the rest of the UK.

Heritage Lab CIC and Canterbury Christ Church University worked in partnership on the Economic Impact report with funding from Locate in Kent and Arts Council England.