The seven stage Civil Aviation Authority flight path process has to be completed for a permanent change to airspace usage, such as a change of routes if Manston becomes operational.

Part of the process is the Develop & Assess Gateway which follows submission of an options appraisal. The RSP appraisal was first rejected in April on three points in two criteria areas due to of “errors and inconsistencies.” A resubmission has now not been passed on two grounds in the same criteria areas.

To pass through the gateway stage RSP need to:

The CAA says the RSP resubmission – which is being managed by consultants Osprey – did not meet Criterion 3 and Criterion 5 of the requirements due to options not being “adequately assessed” and the CAA being unable to conclude that the appraisal had been “correctly undertaken.”

A letter published by the CAA on August 20 says: “ In our Gateway Assessment, the CAA concluded that the submission did not meet Criterion 3 and Criterion 5 for the reasons set out below:

“It is important to note that whether an ACP passes a gateway successfully or not does not predetermine the CAA’s later final decision on whether to approve the airspace change proposal.

“This decision is not an explicit or implicit comment on the merits or otherwise of this ACP. This will come at the decision-making stage (Stage 5).”

RSP began the process to secure approval from the CAA in 2019.

The Civil Aviation Authority CAP 1616 process for airspace change is carried out in 7 stages, with 14 steps. It also includes four process ‘Gateways’ beyond which an applicant is not allowed to proceed until approved by the CAA. The first is the Develop & Assess Gateway .

The options appraisal for this stage looks at issues including, in the case of Manston, how many flights go over Ramsgate and how many go in the direction over St Nicholas-at-Wade. It looks at what options there are for issues such as the noise impact on health and quality of life: air quality; greenhouse gas impact; capacity’; access; fuel burn and costs for things such as training and operations. It also covers safety assessment.

As part of this RSP is required to produce a comprehensive list of route designs with options that minimise the time spent overland by designing tracks that route over the sea as much as possible. This is required to reduce impact on communities such as Ramsgate and Herne Bay. For Ramsgate it is unlikely that overland flight can be designed out because of how close it is to the airport site.

The appraisal document also outlines expected flight movements, saying: “During the daytime period (between 07:00 to 23:00) Manston Airport is forecast to handle approximately 72 aircraft movements during a typical busy day and during the night-time period (between 23:00 and 07:00) it is forecast to handle an average of seven aircraft movements on a typical busy night.” 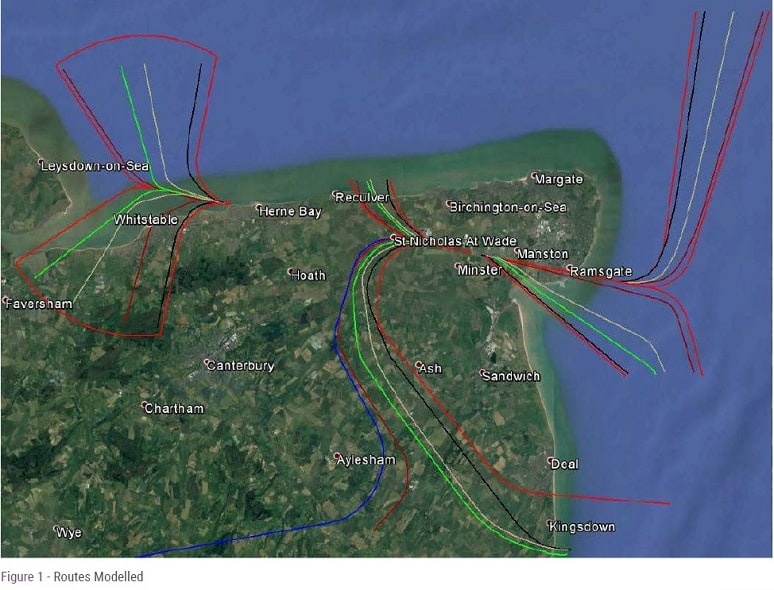 The document submitted to the CAA states that ‘busy’ is based on winter flights as: “A reopened Manston Airport will focus on freight aircraft and the largest number of flights is likely to be during the winter season rather than the summer season. The majority of the cargo anticipated to be handled at Manston will have no particular seasonality associated.

“The exception to this is perishables (fresh fruit, vegetables and cut flowers) the volumes ( and thus flight numbers) of which will be larger in winter than in summer due to the higher import demand during the period when the UK is non-productive in this sector.”

In terms of arrival and departure routes the document says: “The historical weather data suggests that for an average year approximately 70% of arriving aircraft will arrive over Ramsgate and 30% will arrive over Herne Bay.

“For departing aircraft approximately 70% will depart to Herne Bay and 30% towards Ramsgate.” An equal split is expected for  flight paths going north and south.

A spokesperson for project managers Osprey said: “The CAP 1616 process used by the CAA to manage proposed changes to airspace is rightly challenging, in order to provide aviation and community stakeholders with assurance that proposals are as robust as possible – having been carefully scrutinised by an independent Regulator. In the CAA’s words, they are also intended to ‘minimise any work having to be repeated, particularly in getting the supporting documentation for consultation right’.

“Although naturally disappointing that the CAA have reduced the issues to be resolved rather than allowing the gateway to be passed, due to the nature of this project it is particularly important that we get this stage right.

“An airspace change has never before been proposed for a UK airport that is still in the planning stages.  Indeed, in their initial feedback, the CAA have acknowledged that trying to encompass all the CAP 1616 steps required to progress from no airport to a full all-weather cargo hub is a very complex proposition.  This high level of complexity is reflected in the clarification the CAA requires to ensure that the various elements of the proposal fit with the CAP 1616 process.

“Osprey is working closely with the CAA to determine how the CAP 1616 process should be applied to a unique project such as this, and to establish what further clarification is required within our documentation to allow the project to progress to the next stage.

“Once we have received the comprehensive feedback from the CAA, we will revise and re-submit our proposals for a further Stage 2 Gateway Assessment – with the aim of successfully progressing the ACP to the next stage, which includes a full public consultation.”

A Development Consent Order granting approval for an air freight hub at Manston airport last July was quashed in February this year with a new decision now needing to be issued after a re-examination of the Planning Inspectorate evidence.

The action came as the result of a Judicial Review challenge to the decision, launched by Ramsgate resident Jenny Dawes last year, which was to have been heard in the High Court.

The substantive hearing was due to look at whether the Government followed correct procedure in reaching the decision to approve the DCO for airport landowners RiverOak Strategic Partners.

But, last December the Department of Transport acknowledged that the decision approval letter issued from the Minister of State did not contain enough detail about why approval was given against the advice of the Planning Inspectorate and said the Judicial Review would not be contested.

An official consent order from the court was issued to quash the approval and the new decision letter is yet to be published.

The DCO is a separate process to the air change proposals.

The site is in ownership of RSP after a £16million buy out from previous owners Stone Hill Park who had hoped to gain permission for a multi-use housing, business and leisure development.

RSP aims to create aviation at the site with a cargo hub and associated business.