Chef Jack Hancock is full of interesting surprises – presented both on and off the plate.

The University of Salford graduate opened Hearth restaurant – based in the Empire Room in Ramsgate – last month after learning his trade in Manchester alongside the likes of Aiden Byrne and Mark Prescott and then honing his skills under Michelin-starred Adam Byatt in London.

Michelin trained and with a definite sense of what he wants to bring to the table, Jack moved to Ramsgate  to take up the opportunity of being at the helm of his own restaurant.

He has created a menu that features local produce right down to a micro-scale with seaweeds and edibles that he forages from the nature that surrounds us.

It tastes great too, at the restaurant earlier this week we tried seaweed and parmesan biscuits and the flavours were ‘fill your whole mouth’ good. 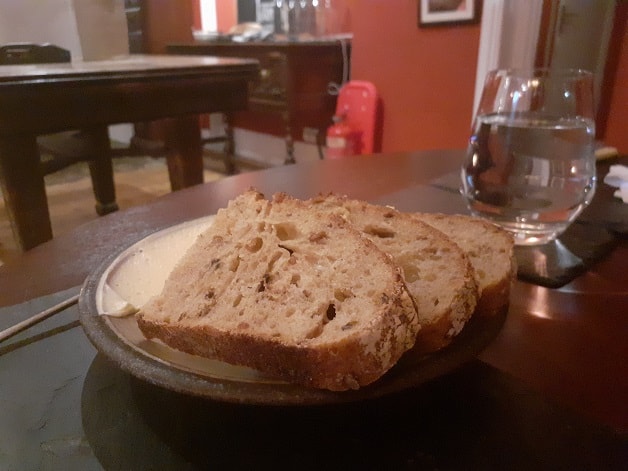 We also had fresh sourdough bread, baked by Jack, with my partner putting a good dent in the loaf.

Jack, who is a PADI certified open water diver and plays the Sax (I told you there were surprises), aims to keep his offering grounded, “cooking on the bone and over coals,” as well as hunting out nature’s free ingredients.

He said: “Foraging is wonderful and it gets you in touch with what’s actually around you and what food exists naturally in the climate. You wouldn’t believe the number of edible things on our doorstep and the flavours you can find.

“It’s also the ultimate in local seasonality because things come and go in a flash, watching the hedgerows change throughout the year and offer different bounties is an absolute pleasure.” 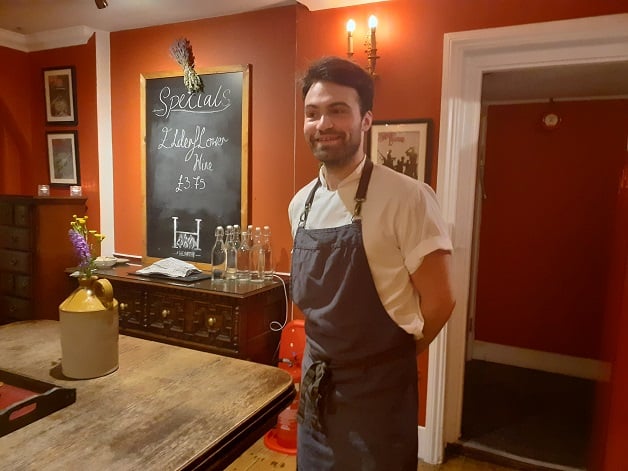 The move to Ramsgate is proving to be bountiful in other ways too. Jack said: “It’s a lot more peaceful down here, everyone works on a different sense of time.

“It is a welcome break from the hustle of London which can be really draining at times. There’s also a real sense of community that I’ve felt a lot already. Being a northern boy, I can’t complain about the weather either!” 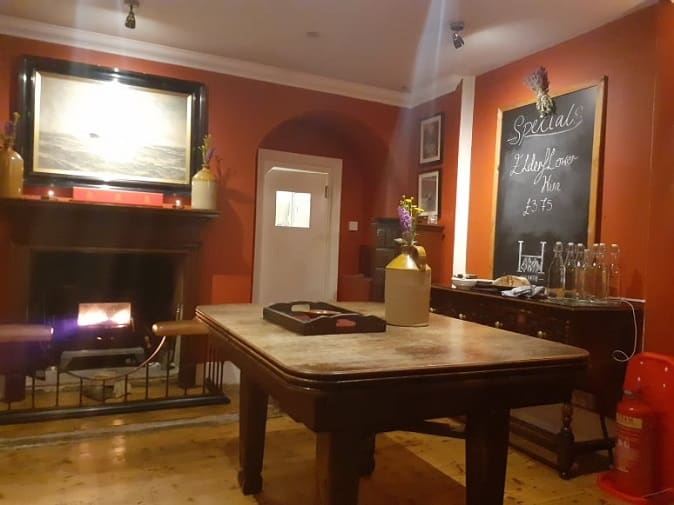 At the restaurant, beneath the Royal Harbour Hotel, Jack has curated a menu serving modern British cuisine, with local, seasonal produce at the heart of it.

A three-course set menu that changes as and when seasonal ingredients dictate is on offer.

Jack said: “We also bake our own bread and butcher our own meat – if it’s on the menu, we’ve made it here.”

The passion for perfecting every detail on the plate is evident, as is the affection Jack has found for his new hometown.

We tried out the menu – which gives three options for each course including a vegetarian one – and were impressed with all of it.

I confess I am not an adventurous diner -I like my Sunday roast and homemade curry and cannot ‘do’ food that looks wrong (never put beetroot near salad cream as I just can’t deal with the resulting pink ‘mess’) so I thought I would be in for a challenge with an unfamiliar menu. 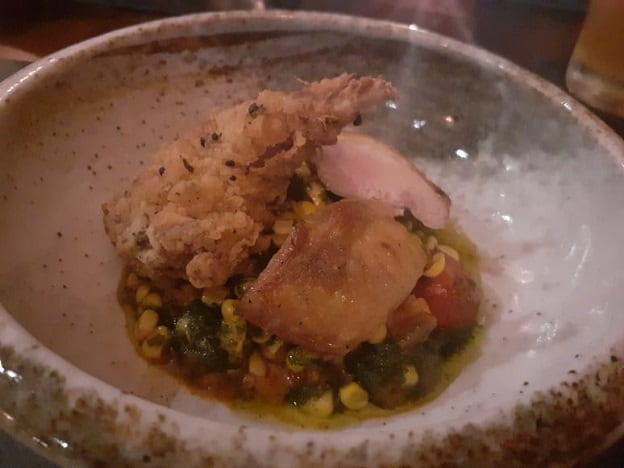 Starter for me was duck fat fried and roast quail and fresh corn succotash and my partner had cured seabass, escabeche of cockles and citrus (I had to google succotash and escabeche. To save you the work Succotash is a culinary dish consisting primarily of sweet corn with lima beans or other shell beans and escabeche is the name for a number of dishes in Spanish, Portuguese, Filipino and Latin American cuisines, consisting of marinated fish or meat, cooked in an acidic sauce, and coloured with pimentón, citrus, and other spices.) 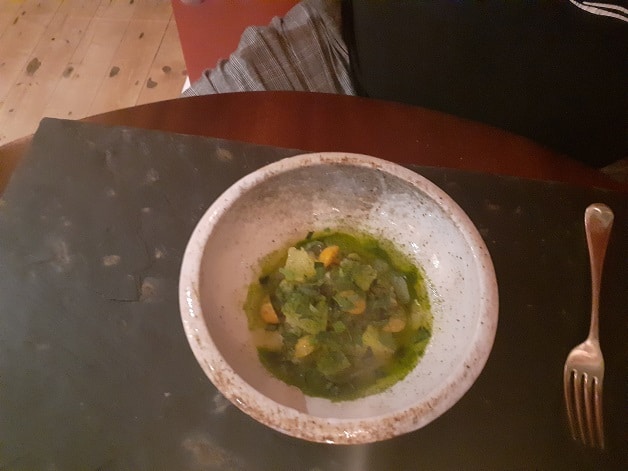 Both dishes had great flavours, vibrant colours and were beautifully presented.

For the main course we both chose breast of guinea fowl, stuffed fig, fermented cabbage and hazelnuts (definitely out of my comfort zone). The guinea fowl had a good flavour, the fig was sort of sweet but tasty and the fermented cabbage was delicious (I’m not a hazelnut fan so didn’t eat those). My other half was on the verge of licking his plate so as not to waste a single bit of the cabbage.

And last, there was the Islands chocolate cremosa (yes, I googled it, apparently it is Spanish for creamy coat), caramelised sourdough and wild cherry. 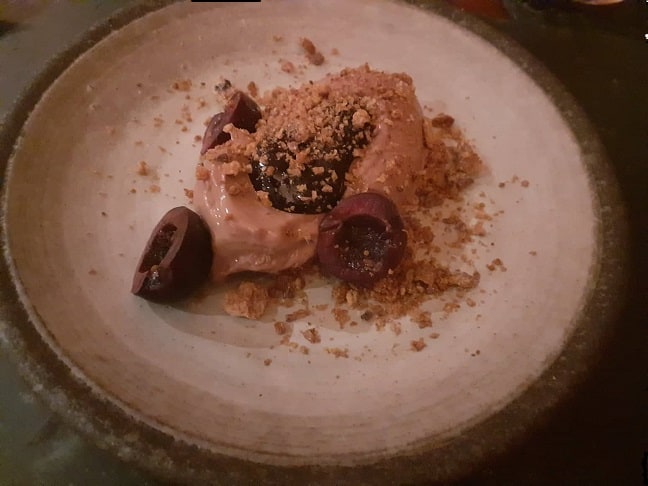 My photo does not in any way do it justice. If you are a chocolate lover definitely go for this. The caramelised sourdough was sprinkled on top and the cherries were proper plump, just plucked off the tree, tasty.

Don’t be fooled by the portion sizes, there was enough to satisfy the appetite (my other half has been known to head to a takeaway if a meal has turned out to be too ‘small plate’). The service was great and Jack frequently appeared at the tables to offer tasters such as the biscuits and was quite happy to explain what the ingredients were and how things were created.

There is a decent drinks menu too, wines, gins, ales, soft drink options, whatever takes your fancy. 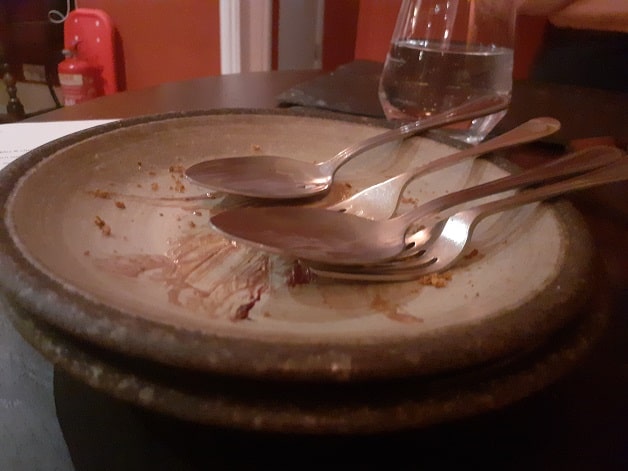 At £50 per head it is pricier than some other venues and I think you have to be serious about your food and have a certain income but if you want to splash out then the quality, presentation and service at Hearth was impressive.

Hearth is a ‘pop-up’ at The Empire Room, scheduled to run for six months. The restaurant is open Tuesday to Saturday, 6pm-9pm.