The mum of a baby boy who died aged just five weeks old after a catalogue of hospital errors has said she is glad East Kent Hospitals Trust has admitted its failures but it will never bring her son back.

Laura Cooke, from Margate, spoke after the conclusion of an inquest in Maidstone this week that was held into son Luchii Gavrilescu’s death.

The inquest jury was told that Luchii was taken to QEQM by Laura on November 29, 2019, suffering with a mottled rash, a snuffly nose, erratic breathing and reduced feeding. He was seen by two junior doctors in the A&E department, diagnosed with bronchiolitis and sent home without further investigation or treatment despite the first doctor recognising that further investigation was necessary.

On December 3, 2019, Laura took her son back to QEQM after being referred by her GP. Luchii had erratic breathing, reduced feeding and a chesty cough. The GP considered he had the clinical signs of a chest infection and sent him to hospital to be seen by a paediatric doctor.

Luchii was instead seen by an advanced nurse practitioner who considered his observations to be normal and sent him home with a diagnosis of resolving bronchiolitis after approximately three hours in the department. 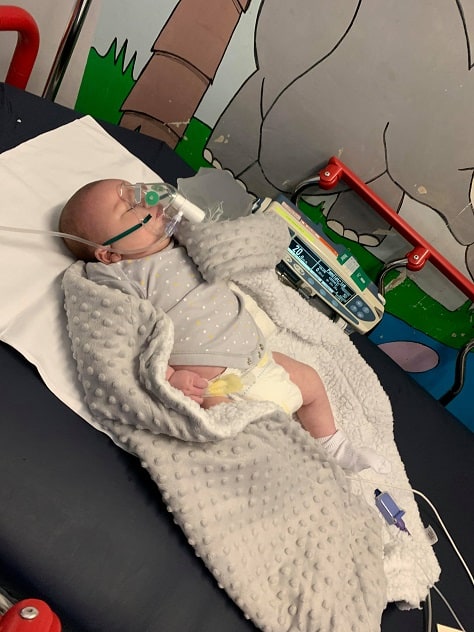 Luchii’s was then taken to QEQM by ambulance on December 6 with erratic breathing, apnoea and floppiness. There was a delay in recognising the seriousness of Luchii’s condition and escalation to a more senior doctor at an earlier stage due to:- failures at handover; a failure of senior paediatric medical staff to attend the A&E department and an unsafe transfer between ward and theatre without a stable airway.

Sadly, after multiple resuscitation attempts Luchii passed away that day.

Initially the family were told Luchii’s cause of death was sepsis but a post mortem confirmed that Luchii had disseminated tuberculosis (TB) with a lymphocytic myocarditis. This meant that the TB infection had spread from Luchii’s lungs to other parts of his body. This is an extremely rare, but treatable, condition.

This was a consequence of the failure to diagnose and treat father Vlado for tuberculosis (TB) – resulting in transmission to Luchii.

Vlado was not diagnosed with TB until after Luchii’s death. A review of a chest x-ray taken of Vlado at William Harvey Hospital in March 2018 demonstrated signs of TB, and the East Kent Hospitas Trust has admitted that he should have been diagnosed and treated at that point.

The failings had already been admitted by East Kent Hospitals Trust in civil proceedings last year.

Professor Habibi, the Coroner’s expert, found that at no point did Luchii’s presentations fit the clinical signs of bronchiolitis and had he undergone senior clinical review by a paediatric registrar or consultant, as he should have, he would have been admitted and undergone investigations as to the cause of his worsening symptoms.

At inquest the Trust said it had learned from Luchii’s sad death and made substantial changes to paediatric practice, producing 59 action points including:

After 6 days of evidence the inquest into Luchii’s death concluded yesterday (July 20) that he died due to natural causes as part of the natural progression of TB. They noted in the record of inquest that it was likely that it was Vlado’s undiagnosed was passed to Luchii and resulted in his passing.

The family were represented at the inquest, pro bono, by counsel James Robottom of 7BR and Fairweathers solicitor, Francesca Beach.

After the inquest Laura said: ‘’I am so grateful to James and Francesca for being by my side this week and for helping me navigate this complicated and heart wrenching process.

“Although I am glad the Trust have made admissions regarding both Luchii and Vlado’s care it will never bring my little boy back and that is something Vlado and I will have to live with for the rest of our lives.’’

Francesca Beach of Fairweathers Solicitors, said: ‘’This past week has been a truly difficult experience for the family having to relieve these painful memories. However it has also been extremely important for them to hear from the medical staff that were involved in their son’s care and also have their fears regarding that care confirmed by a Coronial expert.

“Given that the Trust admitted liability in the civil case so early on there was a risk that they would not get the most out of the inquest due to lack of representation. However counsel, James Robottom of 7BR, kindly agreed to appear pro-bono alongside me and that has been invaluable in securing the answers to the outstanding questions the family had. ‘’

“We accept the conclusion of the jury. Luchii’s condition is extremely rare, but staff caring for children now have additional training and we have put in extra safety checks before children are discharged. We have also made improvements to the way unwell children are monitored.

“Changes have been made to how X-rays are reviewed with an additional check for underlying conditions such as TB.”

East Kent Hospitals Trust is currently the focus of an independent inquiry over its maternity services following a series of ‘avoidable’ baby deaths, including seven day old Harry Richford in 2017.

In that case the Trust was prosecuted by the Care Quality Commission and pleaded guilty to a charge of failing to discharge its duty to provide safe care and treatment, resulting in avoidable harm, in the case of Harry and his mum Sarah.

The independent inquiry, headed by Dr Bill Kirkup, is to examine the management, delivery and outcomes of care provided by the maternity and neonatal services at East Kent University Hospitals NHS Foundation Trust during the period since 2009.

The Independent Investigation will aim to complete its research by Autumn 2022.

Fairweathers solicitors can be contacted free on 0800 999 5585  or via https://www.fairweather-solicitors.co.uk/