Dane Park FC were the victorious competitors at a Rule The Court street football competition this month.

The event at Dane Park, organised by YO! Street Zone was attended by seven teams, with the best street players from Margate and one famous street team – the King 5’s- who came from London to compete.

The event was funded with £500 by the Football Foundation via their Return to Football fund which helps children and young people get back into football after the Covid-19 restrictions. There was also £100 funding towards the event from Kent Sport.

YO! Street Zone, founded and coached by Yofi Yvorra, runs a club teaching football skills and panna based at King Ethelbert school’s sports hall. One to one coaching and workshops for schools and football clubs are also on offer.

The club is also running weekly street football sessions in Dalby Square, Cliftonville, engaging children and young people from various ethnic and social backgrounds in street football and one on one  panna matches.

Yofi said: “We had an afternoon of heated matches, skills and music by DJ Skelton. The prize for the winning team was a Jamaican food platter by local cook CD’s Jerk Kitchen.

Robert Sullivan, Chief Executive of the Football Foundation, said: “This grant award to YO! Street Zone is vital for the local community  as they get back to playing football. Our Return to Football fund is supporting clubs across the country, helping them to kick-start our national game again locally and try to recover from the effects of COVID-19. 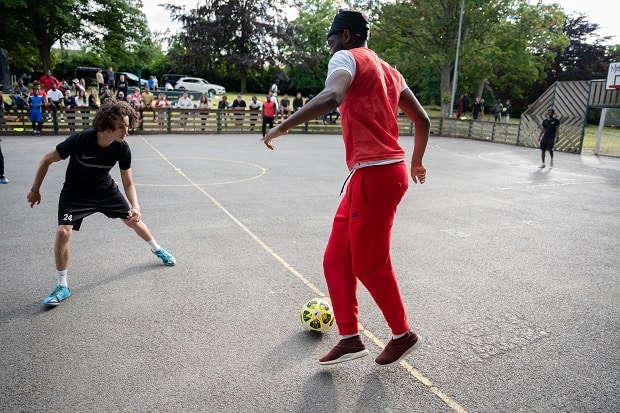 “This is part of our wider ambition to transform our grassroots game and unlock the power of pitches, something we hope to get back to in full force as restrictions are lifted.”

The £2.1m Return to Football Fund is directly targeted at groups of people whose participation has been affected most by COVID-19, offering clubs up to £2,500 each.

Find out more about YO! Street Zone at http://www.yostreetzone.com/football-skills-club-thanet.html,