The recovery of a young Margate dad who suffered life-changing injuries in an attack almost two years ago has been set back by covid restrictions and NHS funding being axed in a clerical error.

Ashley Rogers, 30, suffered severe brain damage after the brutal assault in Dane Park in August 2019. No-one has ever been charged over the attack.

The former carpenter and Winter Gardens barman was in Kings College Hospital and the Royal Hospital for Neuro-disability for a year and had almost half his skull removed to relieve pressure on the brain.

He had cranioplasty – surgical repair of his skull – last November and had made some progress but mum Fiona Shewring, who lives in Acol with husband Ken, says the funding loss this January and limited contact due to covid has set him back.

Due to the stop in NHS funding – caused by wrangles over which agency was responsible for Ashley’s care after a professional filled in his needs form incorrectly – Ashley was without physio and occupational therapy for four months, instead just receiving basic care.

With more than a year of covid restrictions also limiting the family to a one hour visit each week the initial progress Ashley began to make was lost.

Fiona said: “We are probably four months behind where we could have been because his NHS funding was pulled. It means he lost out on rehabilitation, occupational therapy and was just getting care.”

The funding has since been reinstated thanks to help from Strode Park.

Fiona, who works as a Thanet bay inspector, said: “Ashley had cranioplasty in November and had just started being a bit more aware and responding a little bit and then the funding was pulled and it all stopped.”

At the beginning of this year Fiona and Ken decided they wanted to take Ashley out of Strode and attempted to have him put on the housing list.

Fiona said: “With the stop on funding and covid it was never ending so we tried to put him on the council housing list. It was nothing to do with the care at Strode, they have been really good, but he is only 30 – we don’t want him stuck in residential care.

“Now he has the NHS funding back he is entitled to 24 hour care whether he is in a home or in his own environment. The idea is myself and my husband will move in with him and then we can take on some of the care.

“It needs to be a property that is adapted or suitable for adaption but these are limited and there also has to be a five year tenancy agreement.”

Fiona says there have been some hurdles to doing this as it has been difficult to make people  understand that Ashley can’t give permission for her to act on his behalf because he is severely brain damaged and without speech. However, after an enquiry from The Isle of Thanet News, the council has been in touch with the family.

Fiona said: “Ashley doesn’t want to stay behind, he cries when we leave. He needs a place of his own, it shouldn’t be so hard to do this. There are so many obstacles, every time you think you have opened a door it gets shut.”

There has been help from Ramsgate resident Joe Shaw, who suffered similar injuries in an attack in 2018, with the donation of a suitable wheelchair. Joe has made significant progress, learning to speak again, using a wheelchair, starting to walk and becoming a spokesperson for disability access rights in Thanet.

Help for private physio this year has also come from a fundraiser that was launched while Ashley was in hospital and received huge community support. 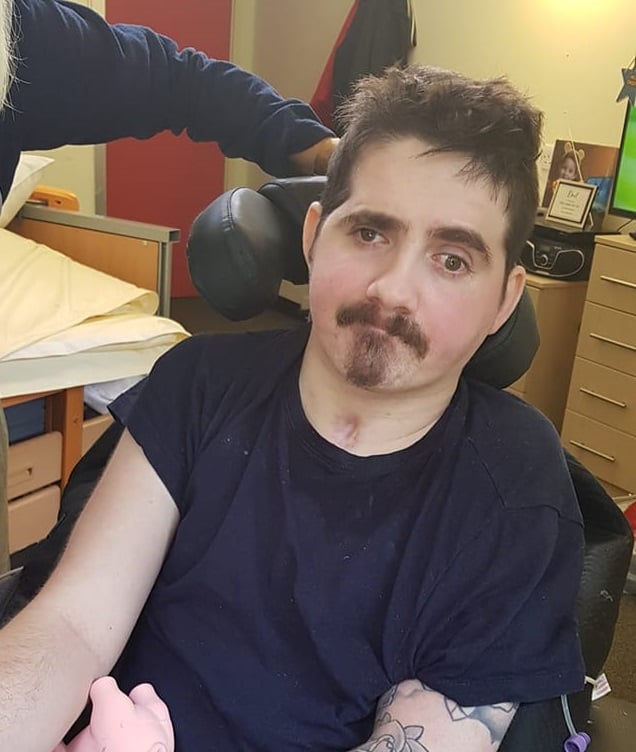 A football match fundraiser also took place and another is being held on July 17 from 1.30pm at St Luke’s football ground. Players and spectators are invited to the Rodney pub in Garlinge afterwards, which has donated the use of the boozer for free, where there will be food and music and a raffle to help fund some more private physio.

Prior to the attack Ashley was a football lover, playing for Westgate Social Club and being a big supporter of Arsenal and Millwall.

Fiona says since paying for the physio – from a therapist Joe’s family put her in contact with – there has been progress. Ashley is able to nod yes and no, blow kisses and shake hands.

But she says the system needs to be simplified: “Things are hard enough for everyone but fighting the system is a nightmare when you don’t really know who it is you’re fighting and you can’t meet them face to face because of the  virus.

“Ashley is fit and healthy and for that I’m grateful, I still have him even if he still can’t speak or eat. But it can’t be just Ashley, there must be other families out there finding it just as hard as us. It shouldn’t be such a struggle.”

A Thanet council spokesperson said of the housing difficulties: “When a household makes an application to the housing register, the housing team requests certain information to assess their application and see if they meet the residency criteria and have a housing need.

“If this information is not provided then we are unable to process the application, which would then lead to it being cancelled.

“We would always urge the applicants to keep in contact with our housing team who will be able to support them if they are having difficulties gathering information.”

Find more details on the A Chair for Ash facebook page

Thanet council has 1,544 households on the housing register and 356 of those have a medical/health need. This equates to 23% of the register.

Housing Assistance Policy & Disabled Facilities Grants The Regulatory Reform (Housing Assistance) (England and Wales) Order 2002 enables local authorities to provide financial assistance to households to carry out repairs, improvements and adaptations so that they can continue to live in their own homes as independently as possible for as long as their health and other relevant circumstances permit.

The Housing Assistance policy was adopted by Thanet council in 2019. As part of this it is Thanet council policy to use housing assistance towards schemes to improve the health and independence of persons with disabilities, the elderly and those with long term health conditions.