A deluge of recycling, and fly-tipping, which resulted in new facilities at Sainsbury’s being roped off after just four days has prompted the supermarket to increase collections.

The recycling area at the store was closed in March due to a change in supplier. It reopened in April but soon shut again due to bins not being adequate.

This month 16 new bins from Biffa were put in place but these soon overflowed with recycling and were roped off after the fourth day.

Frustrated Ramsgate resident Ian Shacklock cycles to the recycling point to dispose of his items but says he often has to cycle back home with them or find alternative disposal methods.

He said: “I live in a block of flats on the West Cliff of Ramsgate and I am one of the 22 percent of Thanet residents who miss out on kerbside recycling collections.

“I can cycle legally to both of these locations but there is no guarantee that there will be free space in the bins when I reach my destination.

“Sometimes I export my recycling waste to Eastbourne or London when I travel by train to visit family and friends.

“Sometimes I rely on neighbours on the East Cliff or Westcliff who have spare capacity in their red or blue bins, but I don’t put anything in strangers’ bins in case that is perceived as fly tipping.

“Sometimes I cycle around the borough in search of the recycling trucks and if I’m lucky enough to find one in a safe location then I leave my cardboard in the street.” 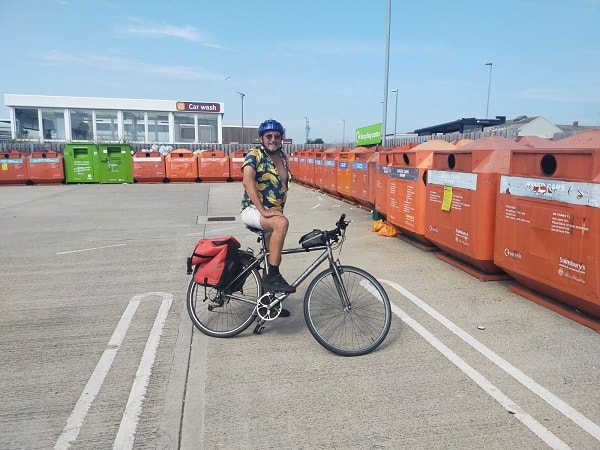 Ian finally emailed Sainsbury’s HQ to raise the alarm over the continuing issues and to ask how they would be resolved. He received a reply within 24 hours to say the issue was being “escalated.”

He said: “I am very unimpressed with the way Sainsbury’s has failed to announce the withdrawal and revival of the service and has failed to communicate with the public and the press. I do not perceive the service to be an act of generosity, because they have benefited from the good publicity it has attracted over the years. Also the amount collected in those bins is a drop in the ocean compared to the amount of plastic that leaves the superstore every hour.

“But I was impressed with the design of the new bins. They are made of metal, with strong wheels and they have sensible lids. I was very optimistic that the new service would run efficiently. However, it seemed to be withdrawn after only four days. Instead of emptying the bins in good time, the supermarket has produced  an oven ready sign that blames the public for depositing too much recycling waste. You couldn’t make it up.”

Sainsbury’s say the issue has been caused by a combination of businesses depositing at the site and fly-tipping.

The demand for Sainsbury’s site is also likely compounded by the fact that facilities at the Tesco superstore in Westwood are no longer in place.

To combat the problem the supermarket chain is now having the bins emptied every two days instead of once a week.

A Sainsbury’s spokesperson said: “The recycling service at our Thanet Westwood  store has been in high demand. As a result, we have introduced additional collections. We’re sorry for any inconvenience this may have caused.”

A visit to the recycling site by Mr Shacklock yesterday (June 29) proved to be “a pleasant surprise” he said after finding it open and the bins emptied.

Government figures released in March show that Thanet households recycled 34.8% of refuse in 2019/20 – down from 36% in 2018/19 and the lowest rate in Kent. Neighbouring Dover, which has a similar demographic, revealed a higher rate of 47.1%.